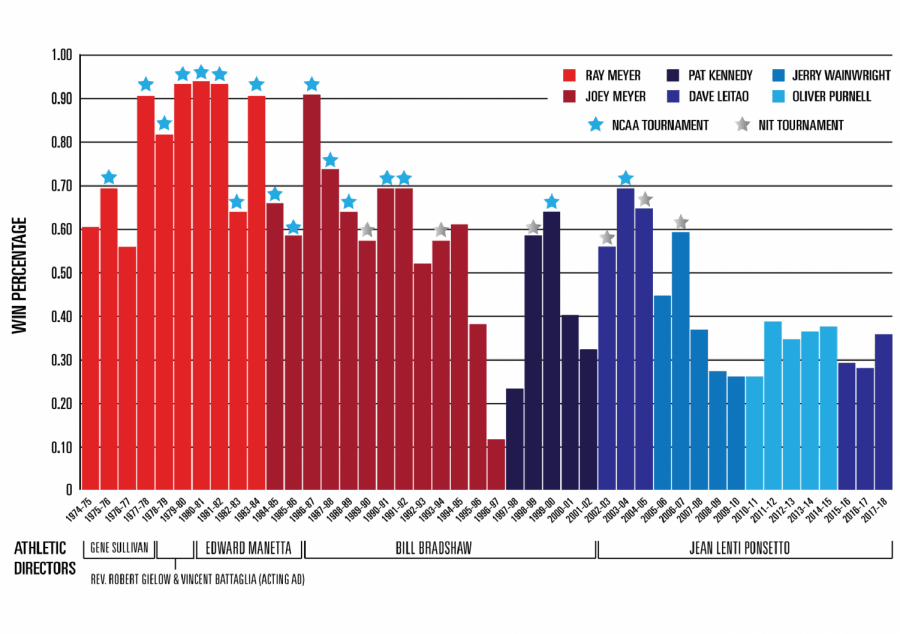 The Blue Demons were once the face of Chicago basketball during the 1970's and 80's but under Jean Lenti Ponsetto's leadership they have faded into irrelevancy. (Ally Zacek | The DePaulia)

When the Blue Demons lost Wednesday’s game against Marquette in the opening round of the Big East Tournament at Madison Square Garden, they capped off what should have been a season to remember.  But a failed first year at the Wintrust Arena might just be the final straw in over a decade of DePaul being among the most laughable, embarrassing and mismanaged programs in the history of Division 1 NCAA basketball.

When questioned about the men’s basketball team’s track record under her tenure, the response from the Sullivan Athletic Center and the university tends to be just as empty as the skulls running the department. Pointing to the successes of non-revenue generating sports like softball, women’s basketball, track and field and the academic prowess of their student athletes, the athletic department routinely misses the point of why they exist: to be a billboard of success for the university.

Today, amid growing public outcry, a third swing and miss on a washed-up Dave Leitao, $82.5 million spent on an near-empty arena and a new president ready to make his own mark on the university, the circumstances are ripe for real change.

Now that Wintrust Arena’s first official season is all wrapped up, falling comically short of each and every expectation laid out by DePaul’s athletic department, The DePaulia is making a formal call for change: It is the opinion of this newspaper — and a growing contingent of students and alumni — that the general welfare of DePaul Athletics and the university at large is best served by the termination or resignation of Lenti Ponsetto and her most recent failed hire.

Three strikes and you’re out

Lenti Ponsetto took the reins of the DePaul athletic department shortly after the 2001-02 season came to a close, just as five-year head coach Pat Kennedy ended his run with the program.  In Kennedy’s place, exiting athletic director Bill Bradshaw picked former University of Connecticut coach and rising star Dave Leitao to take the helm of the fading men’s basketball program for the 2002-03 season.  In his first year, Leitao brought the Blue Demons back to the NIT tournament and then to an NCAA appearance just one year later — a feat that no DePaul men’s basketball team has since achieved.

As many rising coaches eventually do, Leitao left the program following a second straight 20-win season to take a higher paying job at the University of Virginia in 2005.

The Lenti Ponsetto regime, however, didn’t really begin to write its own legacy until 2005, when the Blue Demons took a deep breath and plunged into the elite Big East Conference.

“I am excited for student-athletes, coaches, alumni and fans,” Lenti Ponsetto said at the time. “This invitation to the Big East allows us to renew rivalries with some old friends and positions at DePaul to compete against institutions who share similar philosophies both academically and athletically.”

To this day, the old powerhouse from Lincoln Park — the former face of Chicago basketball — has yet to resurface as Lenti Ponsetto continues to anchor the Blue Demons to the bottom rung of the Big East.

Lenti Ponsetto’s first hire, Jerry Wainwright, was an interesting change of pace to say the least. Leitao was one of the hottest names in college basketball when he left for Virginia, so bringing in a guy in his late 50’s with zero experience in a top-tier conference felt uninspired.

But, to the surprise of many, Wainwright managed to walk the Blue Demons into the quarterfinals of the NIT tournament in just his second year. But the revival didn’t last. Just two years later in 2008-09, Wainwright finished 0-18 in league play and was then fired after an 0-3 start to conference play in the following season.

Scrambling to fix the program as quickly as possible, Lenti Ponsetto turned to Oliver Purnell out of Clemson — a coach with a reputation for fixing struggling basketball programs. He couldn’t have been a bigger bust.

Over Purnell’s five years at DePaul, he racked up a grand total of 15 conference wins, four dead-last finishes and zero postseason appearances while getting paid well over $2 million each year to do it. Hall-of-Fame coaches like Jim Boeheim at Syracuse University made less over the same time.

When Lenti Ponsetto announced Leitao would be returning to Lincoln Park for the 2015-16 season, it saw mixed reactions.  Leitao had been the last coach to take the Blue Demons dancing back in 2003, but in 2015 no program in the country wanted anything to do with him.

After he left Virginia, Leitao found his way to the head coaching job for the Maine Red Claws of the NBA’s Developmental League before making his way back to college basketball as an assistant for the University of Missouri. By the time he was approached to come back to Lincoln Park and build up the ruins of Blue Demon basketball, he was a mere relic of his old self.  Still, Lenti Ponsetto broke out the cash and made Leitao the highest paid employee at the university, where he signed a contract guaranteeing him over $1 million per year.

“I absolutely love this school and everything that it stands for,” Leitao said in 2015. “There isn’t anybody more special in college athletics than Jeanne, and I am honored to help raise the basketball program to the level that she deserves.”

Years one and two back in Chicago did not go as planned for the New England native head coach. Walking away with less than 10 overall wins each season, Blue Demon fans started losing the last shreds of faith they had left. This year Leitao had a more talented roster than any Blue Demon team in recent history, but still only managed 11 wins, 20 losses and a tie for dead-last in the Big East.

If more talent and effectively no progress doesn’t point at a coaching problem, what does? In fact, there is some evidence to suggest that the close losses and victories from Leitao’s season had nothing to do with him at all.  Former Blue Demon Levi Cook, who transferred from the school because he felt unsupported by the program during a family crisis, says it was former associate head coach Rick Carter running the show when it counted most.

“When we (beat) Providence and we beat Georgetown, (Carter) was the guy on the clipboard calling all the plays at the end of the game,” Cook said. “I think they’d probably have couple more wins if Carter was there.”

Carter resigned from the university to pursue a business opportunity after the 2016-17 season.

“To everyone else out there, I dare you to give us a try,” Leitao said. “We are absolutely going to make you proud.”

Pride is currently the among the last words or emotions associated with DePaul men’s basketball.

Contempt for the crowd

Lenti Ponsetto’s record running DePaul men’s basketball team speaks for itself and it’s inexcusable — no athletic director with her record handling a flagship program would have lasted half as long as she has. But what may be even more despicable is the way she lies and flip-flops publicly about the issues with men’s basketball.

Earlier this year when speaking with The DePaulia about attendance at Wintrust, Lenti Ponsetto said she didn’t think feasibility projections of 9,500 fans at home games was reasonable and that it was never a target for the university.  Upon review of The DePaulia’s archives, that turned out to be a bold faced lie.

Lenti Ponsetto told the DePaulia in 2016 that 9,500 “was a relatively achievable number” and that “they are very confident.”

Even outside the realm of twisting attendance figures, Lenti Ponsetto can’t seem to stick to one story about where the program is going. At the press conference held the day Leitao was announced as head coach, Lenti Ponsetto projected a lot of confidence about the immediate future of DePaul men’s basketball.

“We made it clear to everyone we talked to,” Lenti Ponsetto said. “We don’t see this as a rebuild.”

This past Wednesday before the men’s team took the court at Madison Square Garden, she told the Chicago Tribune a very different story.

“I appreciate we have some fans who want to win right away. I think there are some people who thought as soon as we opened the doors to Wintrust, that was going to equal winning right away,” Lenti Ponsetto said. “For us to be able to really realize the value of having a brand-new facility and amenity space that goes with it, it’s going to take us a few years to do that because it’s a recruiting process.”

Lenti Ponsetto seems to have already forgotten that Tyger Campbell, DePaul’s biggest potential recruit in recent history, attended several games at Wintrust Arena throughout the year and still didn’t move to Lincoln Park.  And even if it’s really going to take some time for Wintrust to turn the program around, Lenti Ponsetto may have repelled every recruit in the country with her own words.

“I’m excited (for) what I hear from our longtime, loyal season ticket holders who come to games because they want to support DePaul student-athletes,” she told the Chicago Tribune. “They’re not coming to games expecting it to be the junior NBA.”

Translation: if you’re really good at basketball and want to play in the NBA, don’t come to DePaul.

Today the Blue Demons fester at the bottom of the Big East standings, out of everyone’s sight and mind.  Once the face of basketball in the Windy City, programs like Loyola have passed us by, emerging as legitimate, NCAA Tournament worthy programs.

While Lenti Ponsetto continues to lament DePaul’s unique circumstances as an urban university, Loyola — just a few stops up the Red Line — is proving that basketball teams can both win and draw a crowd in the city.