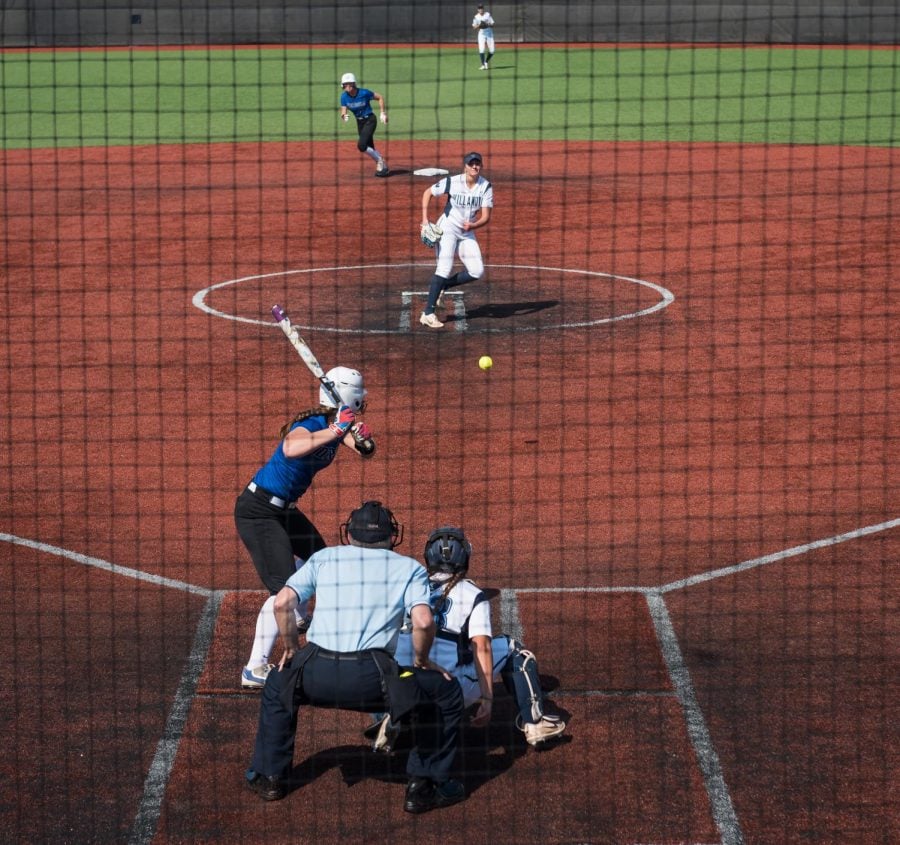 DePaul improved to 20-2 in 2018 when it scores first. (Photo courtesy of Konrad Markowski | The DePaulia)

After almost two months on the road, DePaul (22-11, 5-0 Big East) opened the home portion of their schedule by outscoring Villanova (10-12, 0-2 Big East) 22-5 in a pair of victories Friday afternoon at Cacciatore Stadium. The wins helped the Blue Demons extend its winning streak to five games, with the last three coming via the run-rule.

DePaul head coach Eugene Lenti was pleased with his team’s fast start after they scored 18 combined runs in the first two innings of Friday’s games.

“I like the way we came out early today and swung the bats well, that was the big thing. We talk about starting fast and finishing strong, the fast start really helps the pitchers,” Lenti said. “The pitchers weren’t as sharp as they normally are, so it’s nice to have that 5,6,7,8-run lead during the game.”

The Blue Demons put pressure on the Wildcats early loading the bases in the first three innings of the first game and again to start the second game, while forcing them to use five pitchers over the course of the two games. Lenti said his team did a good getting timely hits, while being more selective at the plate.

“We’re just doing better at hitting all types of pitches and all types of pitching,” Lenti said. “We hit some changeups for home runs today that was really big for us. We’re just being a little more selective, drawing more walks and getting the big hits, that’s really what scoring runs is all about.”

“Definitely the run support from everyone, everyone contributes too,” Moore said. “Definitely getting that run support, its so much easier to be relaxed on the mound and not press.”

After playing their first 31 on the road, sophomore Angela Scalzitti said it was exciting to finally play at home.

“So exciting, so nice to sleep in your own bed before the game,” Scalzitti said. “Just being at home and seeing our parents in the stands it’s a great feeling — very excited.”

This comfort level, Scalzitti said likely attributed to one of their best offensive outputs of the year.

“I think that’s part of the reason our bats came alive,” Scalzitti said. “That’s I think the most hits we’ve had all year, quality at-bat hits.”