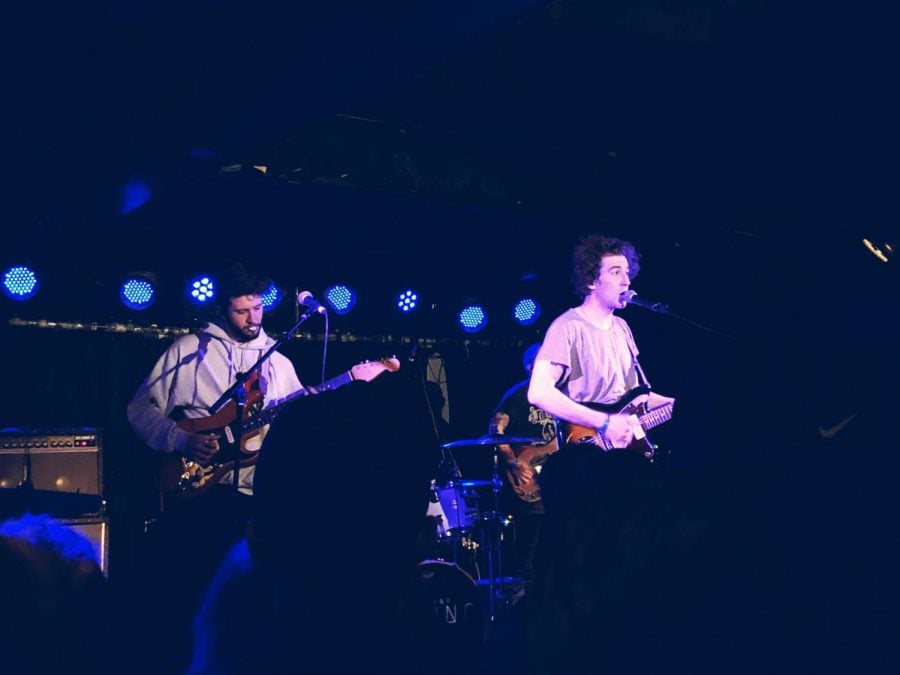 The Band CAMINO performing as the show opener at the Subterranean. (Cailey Gleeson | The DePaulia)

Fans anxiously waited in the frigid March weather outside of the Subterranean to hear The Night Game with opening act The Band CAMINO.

The Night Game is a Boston-based rock band that is comprised of lead vocalist and guitarist Martin Johnson and lead guitarist Kirin J. Callinan. Shockingly — given Johnson’s past as former frontman of Boys Like Girls — The Night Game doesn’t have any emo-pop music in their set, but instead exude serious ‘80s-style new wave pop vibes despite their alternative rock classification.

As a part of their American Nights Tour, The Night Game took the stage at the Subterranean on March 29th with The Band CAMINO, a Memphis-based alternative group. The Band CAMINO was formed in 2015 by vocalist and lead guitarist Jeffrey Jordan, vocalist and guitarist Spencer Stewart, bassist Graham Rowell and drummer Caleb Hughes.

Arriving in Chicago just an hour before their set, band members descended the spiral staircase illuminated with red string lights onto the stage and opened with “For a While.”

Although The Band CAMINO is still relatively indie, they’re quickly gathering a following. Frontman Jordan commented on the group’s success while reflecting on the size of the crowd – a sizable increase from the 17 people that attended their first Chicago show.

Next up was “Berenstein” — the band’s most recent release and a featured song on Taylor Swift’s “Songs Taylor Loves” Spotify playlist. Their set showcased the group’s impressive variety of music — balancing their collection of slower songs like “I Spend Too Much Time In My Room” and “My Thoughts on You” with more upbeat bops like “2 / 14.” The vocal talents of both Jordan and Stewart were apparent as the entire live performance sounded exactly like their recordings.

The charisma between the band and the audience was undeniable and lasted even after they departed from the stage. As The Night Game prepared for their set, the tunes exuding from the venue’s speakers only exemplified the anticipation for the main act.

While setting up, guitarist Callinan attempted to auction off his jacket to the crowd — with Johnson quickly joining in as an additional auctioneer.

The hilarious charisma between band members quickly transferred to audience members. Callinan truly stole the show with a series of funky dance moves — somewhat reminiscent of the onstage mannerisms of English rock band The 1975’s frontman Matty Healy’s — when he wasn’t strumming his guitar.

“Once In A Lifetime” was one of the opening songs in The Night Game’s set and immediately established the group’s sheer talent — with strong vocals from Johnson that didn’t waver throughout the entire night.

Later on, pink lights illuminated the Subterranean as “Kids In Love,” a collaborative ballad with Kygo and Maja Francis about lovers growing apart, played, creating an idyllic scene that felt straight out of an ‘80s teen movie.

Unfortunately, Johnson didn’t break out any Boys Like Girls classics — like “Love Drunk” or “The Great Escape” — but performed a brilliant cover of Michael Jackson’s “Man in the Mirror.” This unexpected portion of their set only intensified the energy between the crowd and the group — and completely set the stage for the final group of songs in their set.

The band’s breakout single, “The Outfield,” was next. The nostalgic ‘80s vibes from this song are so reminiscent of The Outfield’s “Your Love” that it almost made it feel like the venue was taken back to one of the band’s ‘80s performances. The energy from this anthem caused the singing from the audience to almost overpower the band itself.

The ‘80s vibes only continued as the group closed their set with their most recent single, “Bad Girls Don’t Cry.” This groovy song perfectly ended the night and set the stage for The Night Game’s debut album release, which is scheduled for later this year.