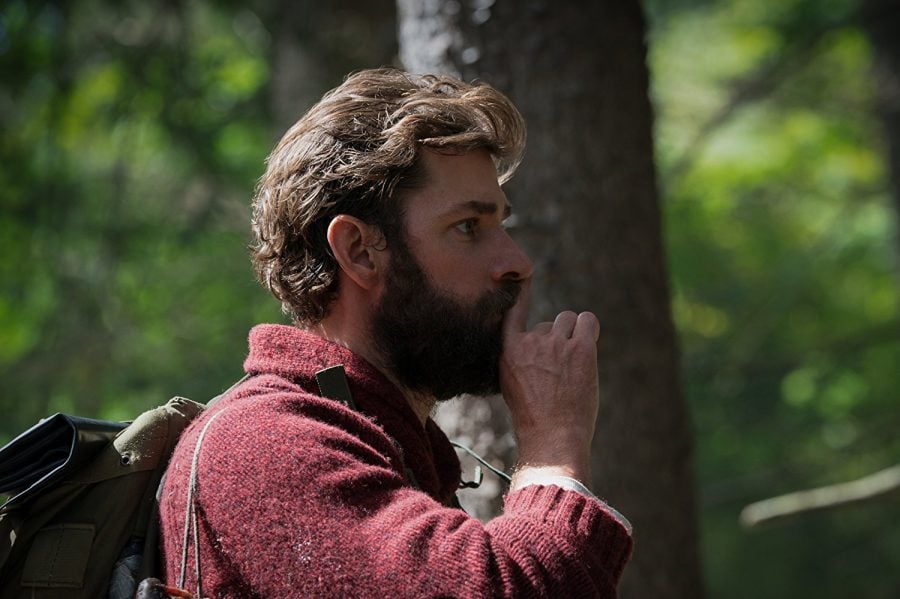 John Krasinski directs and stars along side his wife Emily Blunt in "A Quiet Place."

Almost every horror film has a moment where one of the protagonists is trapped in the same room as the monster/psycho and the audience collectively holds its breath, seemingly trying to avoid making any sound that might tip off the on-screen assailant to the hero’s whereabouts. Now imagine that scene, but stretched out to over one hour and 35 minutes. You would all die. All morbid metaphors aside, this heightened tension is what makes John Krasinski’s “A Quiet Place” such a stellar example of the horror genre.

The scene is set an indeterminate amount of time in the future after an alien race has come to Earth and laid waste to society.  We meet our main characters, the Abbott family, scavenging for some supplies 89 days after the aliens’ arrival. It becomes clear that these creatures are quick, tough, deadly and also blind. If there is a louder noise in the area than you you’re safe; if not you’ll be deader than the dodos. We follow the family over a series of days as they try to scrape by and hopefully find a way to strike back at the creatures.

Krasinski does an excellent job establishing his character in a film that has only two or three scenes with any talking all. Instead, the film uses plenty of sign language; If you don’t know American Sign Language be ready to read lots of subtitles. Be sure to keep an eye on the actors too, because “A Quiet Place” picks up where “The Shape of Water” left off, showing just how much emotion can be conveyed through gestures. The tone of what is being said comes through in the length of a motion, its repetition, its forcefulness and the expression that accompanies it. It is a credit to this film that with all the characters using ASL, the audience never has to think twice about what is being said.

Millicent Simmonds also stands out as the deaf daughter of John Krasinski and Emily Blunt’s characters. Her relationship with her father is at the crux of several of the more moving moments in the film, and she proves herself up to the task each time. Her decision-making is clear at every moment, and even when she does something questionable she is able to convey her motivations through actions and expressions alone.

Additionally, writing a deaf character (Simmonds is deaf in real life as well) in a film all about sound was a great narrative choice. It lends itself to some wonderfully frustrating dramatic tension, creating some great moments of contrast.  Every so often we hear the film through Simmonds’ perspective, bringing into focus how much sound is actually created by stepping on sand paths. It often makes the louder sounds pop violently when the film cuts to them after moments of silence.

Most horror films have you meet the group at the beginning and then let the tension gradually rise as more and more things go wrong. Here, that tension is present throughout the film, so that it fills even the family bonding moments. The film plays with this in some ways, making the audience feel safe before reminding them what is always just around the Riverbend. For example, the film continues to put the characters in harsher and more noise-inducing circumstances, culminating at the moment when Emily Blunt’s character must give birth. It could’ve slipped beyond the point of believability, but it becomes one of, it not the, most memorable scene.

This moment comes only about halfway through the film, but the movie is able to keep the stakes high enough that the audience can never quite relax – particularly as we get closer glimpses of the strange alien creatures that are attacking our heroes. The creature designs are wonderful, giving the aliens a recognizable but enticingly strange look. The most important thing about them is their sound design. We spend most of the film hearing them rather than seeing them, where they give off eerie clicking sounds (reminiscent of the zombies in “The Last of Us,” for you gamers out there) as they constantly drag their limbs across furniture and walls. It creates an immediate sense of dread whenever it is heard.

This film is a must-see for any horror fan, but it goes a bit beyond that. It doesn’t radically defy genre conventions in any way, but it also succeeds as a family film, albeit a terrifying one. And as a piece of cinema that is just so well made, it is hard not to appreciate it from an artistic perspective as well.