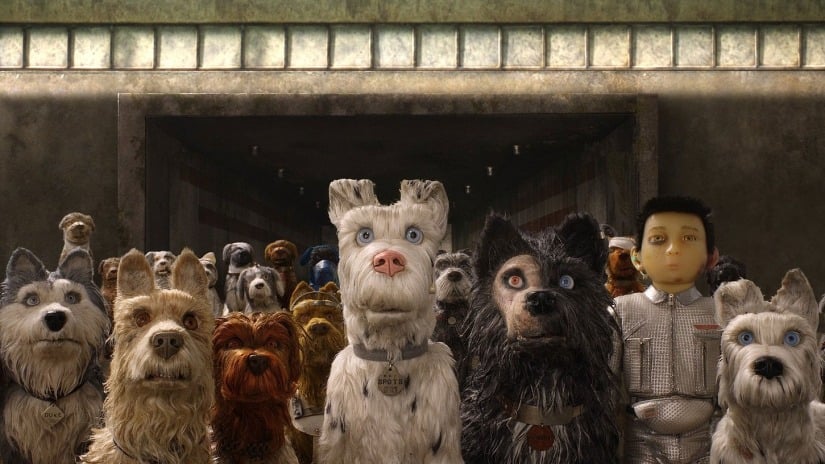 Anderson's new film is being touted as one of the most ambitious stop-motion projects. (Image courtesy of IMBD)

Wes Anderson’s newest film, “Isle of Dogs,” was released in Chicago on March 23. Set in Japan, the film depicts a dystopian future where dogs are banished from the country to nearby “Trash Island,” and the young boy who bravely attempts to save his dog. The film has a star-studded cast including frequent Wes Anderson collaborators Bryan Cranston, Edward Norton, Bill Murray, Jeff Goldblum and Frances McDormand, among others.

The film tells the tale of the dogs of the fictional Megasaki City, Japan who have been forced to leave their families under the order of mayor Kobayashi. Months later, Atari Kobayashi, adopted son of the mayor, comes to the island searching for his dog Spots. A pack of dogs, lead by stray Chief, help Atari find Spots while evading capture from government officials. Meanwhile, a group of students in Megasaki City lead a counteroffensive to save Atari and once again allow dogs into the city.

The film is currently under fire for alleged cultural appropriation and stereotyping due to Anderson’s Eurocentric depiction of Japan. The film is also under criticism for its inclusion of a white character as the heroine in an Asian locale, which some critics have deemed an instance of “white saviorism,” a term which refers to a white character being introduced in order to save minority characters from their problems. Most notably, critic Justin Chang of The Los Angeles Times directed heavy criticism at Anderson, writing, “Bluntly put, does this white American filmmaker’s highly selective, idiosyncratic rendering of an East Asian society constitute a sincere act of homage, or a clueless failure of sensitivity?” While the film’s press has been overshadowed by controversy, overall critic and audiences reviews have been positive.

“Isle of Dogs” is a heartwarming tale, and like Anderson’s 2009 animated film “The Fantastic Mr. Fox” reclaims the genre of animation for an adult audience. It doesn’t shy away from serious issues or dark humor. The film is both lightheartedly humorous and brutally honest in a way which tugs at your heartstrings but leaves you with a smile. It is Anderson at his very best: delightful with rough edges.

The stop motion animation is breathtaking, each shot filled with extensive detail. The animation was done over a period of two years, creating a spectacular result similar to that of “The Fantastic Mr. Fox.” It is one of the most ambitious stop motion films ever created, and has set the bar for future animation projects by Anderson and other filmmakers.

“Isle of Dogs” is worth a watch for the characters alone. The dogs themselves are an eccentric and endearing bunch. Each dog is independently loveable and humorous and feels absolutely true despite the fantasy of the film. Anderson gives real life to these dogs, thereby finding genuine ways to connect our own lives to the stories of man’s best friend. You will see the best parts of yourself and the best parts of your dog in these characters.

Most memorable is Chief, voiced by Bryan Cranston, the singular stray dog in the film who is rough around the edges and generally unlikeable in the early stages of the story. Although it may not seem so at first, Chief becomes the sole canine hero of the film. His transformation is slow and imperfect but feels especially true and human-like in the best way a dog can be. The characters are simply irresistible, as they are in all Anderson films, and even the faults in the narrative are easily bridged by the strong characters.

The sheer number of characters leaves little room for extensive character and plot development. There are many subplots that bring up questions left unanswered, or are hastily brought together at the end of the movie. At 101 minutes the film feels long enough, but it is still clear that Anderson needed more time in order to tell the story he had envisioned. Some of the human characters in the film feel slightly one-dimensional. The human characters speak in Japanese without subtitles, while the dogs speak in English. There is a handy interpreter for very complex moments involving humans, voiced by Frances McDormand, but otherwise the audience is left to understand through facial expressions and tone alone. This choice, while the right one for the film, leaves a disconnect between the humans, the dogs and the audience.

“Isle of Dogs” is a completely original film, one I imagine may spark more films with more complex animal characters as heroes. Anderson expertly combined a devastating story with plenty of heart, making it suitable for a wide range of audiences. It’s tough to resist the heartwarming story of a boy and his dog, and “Isle of Dogs” puts a new spin on the genre which makes it well worth watching.