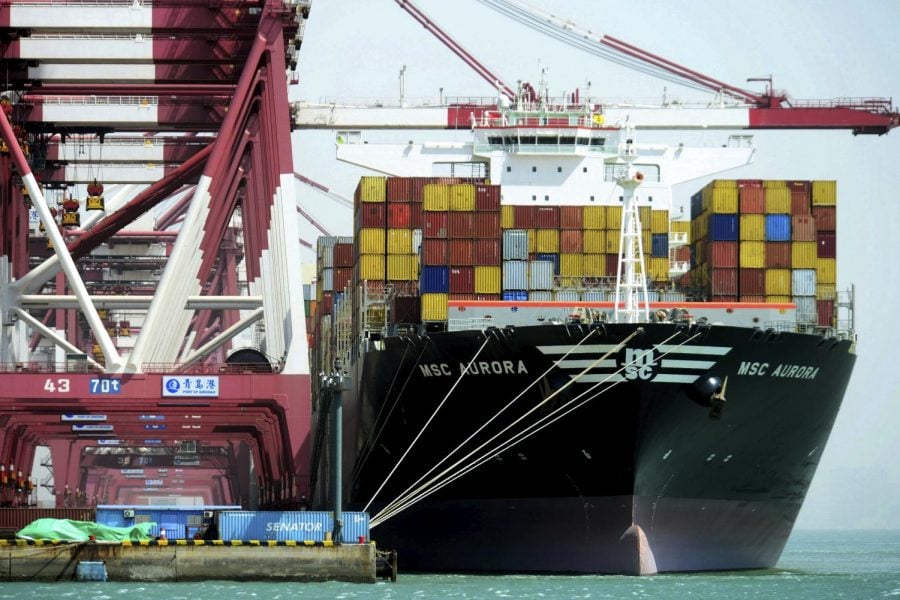 Containers are loaded onto a cargo ship at the port in Qingdao in east China's Shandong province. China vowed to fight the U.S. "at any cost" after President Donald Trump proposed additional tariffs on Chinese goods in an escalating trade dispute between the world's two largest economies. (Chinatopix via AP)

The U.S. has engaged itself in yet another international conflict, but this time around the conflict is a trade war with international powerhouse China, whose economy is the second largest in the world with an $11 trillion GDP compared to the U.S.’s $19 trillion GDP.

It all started at the beginning of March when President Donald Trump proposed a 25 percent tariff on steel imports and a 10 percent tariff on aluminum imports from China – totaling $60 billion in Chinese goods – as a means to punish China for what his administration considers to have been unfair trade practices. Trump also wants to crack down on what he says is China’s theft of U.S. companies’ intellectual property.

“The real question that needs to be answered is why are U.S. companies importing Chinese steel rather than using domestic steel, or why are Chinese companies more competitive? Some say it is because Chinese companies are subsidized by their government, and that without subsidies, Chinese steel would not be as competitive,” said Sébastien Mary, an economics professor who teaches a course on international trade.

“The U.S. often complains about this, but meanwhile implements similar policies in other sectors: Think about Boeing or the agriculture sector; in some ways, the U.S. is somewhat hypocritical with respect to its trade policy.”

The trade talks with China also served as an integral part of Trump’s 2016 campaign to bring jobs back to the U.S.; Trump has previously blamed China’s trade practices for the closure of 60,000 factories that cost the U.S. around six million jobs.

The tariffs are not immediately going into effect and in fact, might not ever get fully implemented. Domestic corporations have until May 22 to raise any objections they have to the tariffs, and after that date the U.S. will have 180 days to decide whether or not to move on with the tariff proposal.

Currently, it’s difficult to predict the winner and loser of the tariff, as they are “unlikely to have large effects on both countries,” Mary said. “Tariffs rarely benefit the country that implements them. In practice, the impacts depend on the importance of U.S. demand for the products, and whether higher costs for companies in the U.S. that use steel will be passed on to consumers via higher prices. Given the current data, it is likely to have small effects.”

But the issue goes beyond economic theory, as Trump is widely seen to be heavily basing these policies on political ideology.

“In the present case, they fulfill a different objective,” Mary said. “In Trump’s case, it is a political signal to people who have voted for him, especially as the midterms are coming soon (…) this problem is more philosophical than practical.”

Even though it might not be easy to predict the holistic effects of the tariff on both the U.S. and China, it is possible to predict some of the damaging economic effects the tariff could have across different American industries, especially where steel and aluminum are concerned.

Maureen Sioh, an associate professor of geography and sustainable urban development, doesn’t believe that the tariff would fulfill Trump’s goal of bringing jobs back to the U.S.

“In any case, for job creation, the complex supply chains that American multinationals rely upon mean that any gains might be offset by job losses downstream in the industries that do use steel and aluminum, such as the auto industry, which will be impacted by more expensive steel,” Sioh said. “As for bringing jobs from those industries back to the U.S. because steel and aluminum imports from China would no longer be competitive, it is worth noting that we import more steel from Canada and Mexico.”

Another reason Trump is proposing the tariff lies in his desire to reduce the U.S. trade deficit with China by $100 billion. China is the largest trading partner to the U.S., with the trade deficit at the end of 2017 standing at a little over $375 billion. That’s because U.S. exports to China were around just $130 billion, while imports from China were approximately $506 billion on a nominal, non-seasonally adjusted basis, according to the U.S. Census foreign trade database.

On April 1, the Chinese government announced that it would be placing tariffs worth $3 billion on 128 U.S. products. As expected, Trump didn’t take this lightly. As a form of retaliation, the Trump administration on Tuesday published a list of 1,300 Chinese exports that could potentially be targeted for a 25 percent tariff. The U.S. plans to apply those tariffs to nearly $50 billion worth of goods that include software and other technologies, but they could prove costly for Trump’s anti-theft agenda in the long run.

“Trump’s second goal of stopping intellectual property theft by China, mostly through what he sees as enforced technology transfer, is not supported even by the companies which are trying to reduce the degree of technology transfer to which they have to agree in order to access the Chinese markets,” Sioh said.

And the trade war didn’t stop with the technology products – it only escalated. On Wednesday the Chinese Ministry of Commerce responded with another retaliation, this time involving a 25 percent tariff on $50 billion worth of 106 U.S. exports that include soybeans and chemicals.  The soybean tariff will likely hit the U.S. the hardest, with farmers especially bearing the brunt of the damage. In 2017, per China’s customs bureau, soybeans totaled $13.9 billion in U.S. exports.

“Farmers export meat, soybeans, fruit and other products to China that have been targeted by China,” said Jeff Rios, treasurer of the DePaul Democrats. “With less demand because of the higher prices of the tariff, farmers will be left with a surplus that will drive down the price in the U.S. and make it difficult for farmers to stay solvent.”

Not to mention, the tariffs would negatively impact China’s trading partners such as Japan, South Korea and Australia in terms of export sales.

“For now, even coming across as a bad or unreliable trade partner won’t mean that other countries will be discouraged from trading with us,” Sioh said.