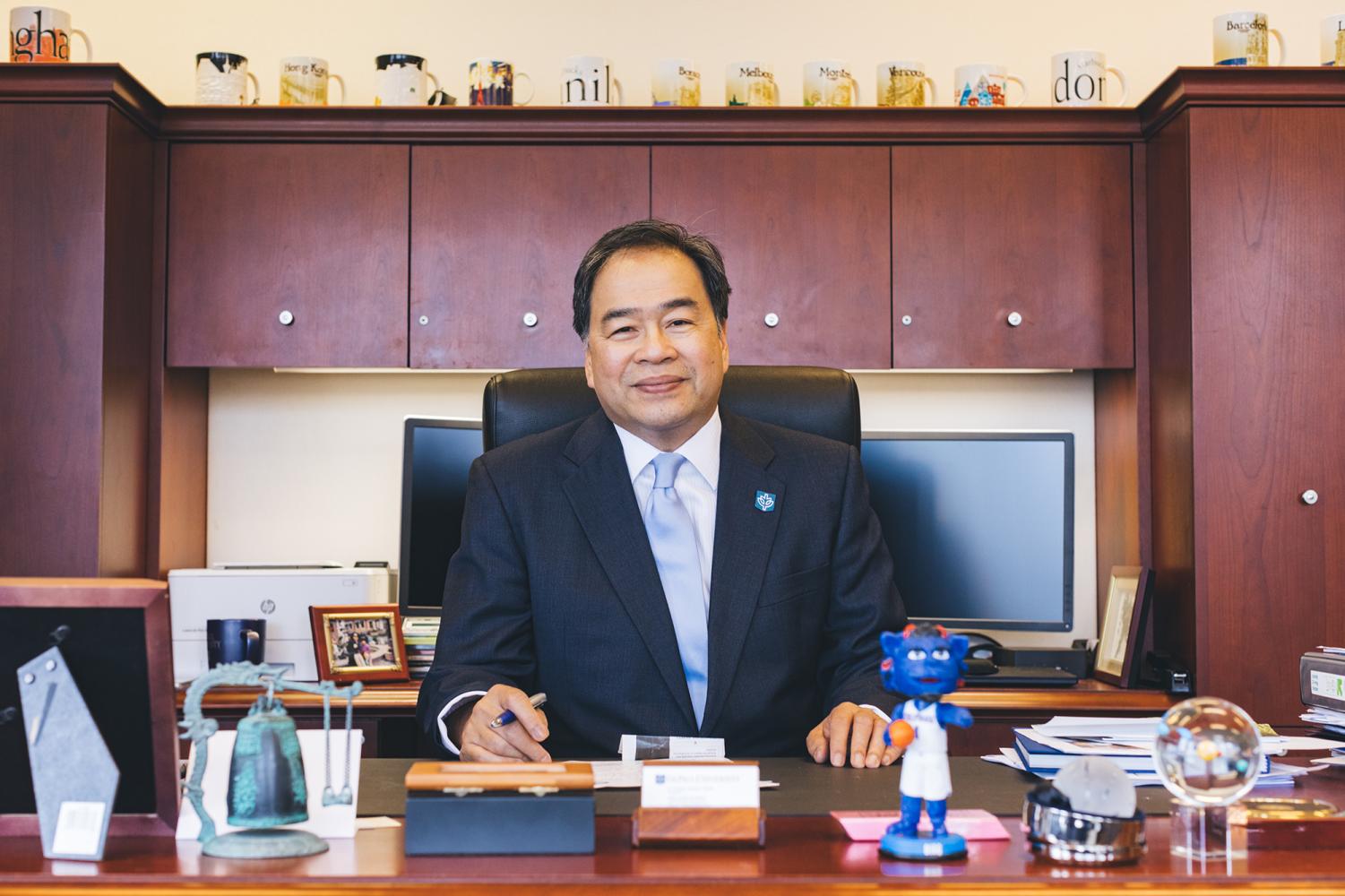 For the first time in its 119-year history, DePaul University has a president who is not a Vincentian priest. President A. Gabriel Esteban, 55, brings a fresh vision to the university after the resignation of Rev. Dennis Holtschneider, C.M. last fall.

Esteban represents a shifting focus for the university, transitioning from a traditionally faith-based ethos in the wake of concerns about the university’s long-term viability and competitiveness.

The DePaulia’s Editorial Board sat down with Esteban in his Loop offices on Wednesday, March 30 to talk about his plans for the future of the university.

Esteban is a quiet, soft-spoken man. He moves slowly but deliberately and chooses his words carefully.

Being the first lay president has presented some unique challenges, but overall, he says he’s adjusting well. Of the 9 Catholic universities in Illinois, none of them are led by members of the clergy.

In the early days of his time at DePaul, he says he’s caught people starting to address him as “Father.”

“To some degree, there’s a bigger campus-wide transition that has to occur,” he said. “They’re used to seeing a priest, a Vincentian.”

He lives near the Lincoln Park campus with his wife, Josephine, where he has relocated from New Jersey. He said he and his wife used to vacation in Chicago, so the transition has been easy.

In the summer, he and Josephine stroll the Sheffield Neighbors neighborhood in the evenings.

President Esteban enjoys his office but says it is one of the only buildings in DePaul’s loop campus that the university doesn’t own.

With a recent uptick in crime in the Lincoln Park area, specifically armed robberies and carjackings, he says the university is looking at trying to find new ways to make students safer. He said there is a possibility that they will look at increasing Public Safety foot patrols, or possibly increasing the numbers of cameras on campus. “The only thing about cameras: they are only there after the fact.”

Esteban assumed power in September 2017, at a time when DePaul is at an existential crossroads. Enrollment has been declining while tuition costs continue to rise. But he says he is determined to correct the path that the university is currently set on.

Esteban, formerly the president of Big East competitor Seton Hall University for six years (he was also the first lay president there in the 25 years preceding him), he helped the university overcome a lot of problems not unlike the ones that DePaul is currently facing. At Seton Hall, he helped the men’s basketball team become March Madness regulars, as well as growing enrollment and endowment numbers.

Growing up in the Philippines, he developed an affinity for comic books and superheroes. Comic books were pricey there, so Esteban and his friends used to have to hang out near U.S. air bases so they could try and trade with the kids who lived there.

In keeping with his roots as a fan of pop culture, his desk in Lincoln Park houses a collection of action figures Alongside his obligatory Dibs bobblehead, he has Superman, Flash, Thor, and one of his all-time favorites, Captain America.

But given the opportunity, he said he wouldn’t want a superpower for himself. Maybe, he said, he would want something like “super-wisdom.”

“That way I wouldn’t make any mistakes.”

Esteban grew up under the brutal dictatorship of Ferdinand Marcos. After a terrorist bombing that killed 9 and injured almost 100 people at a political rally for the Philippines Liberal Party, Marcos tamped down. Historians agree that the bombing was perpetrated by Marcos as a pretext for him to declare martial law, which he did in 1972.

“As a college student, I grew up under martial law, under a dictatorship where there was no such thing as free speech,” Esteban said. “(You could) disappear because you protested.”

Students at DePaul have had a starkly different college experience. The Milo Yiannopoulos incident in 2016 saw student protestors effectively shut down the unpopular speaker with no backlash. Earlier this year, students opposed to Charles Murray’s speaking invitation from the DePaul College Republicans protested in the rain outside Courtelyou Commons with police standing nearby.

Esteban still says that “universities are supposed to be a place where we listen to things which may be contrary to our beliefs,” but says there has to be a line drawn somewhere. For him, that line only exists when the safety of students cannot be guaranteed.

“The number one thing to me is (…), ‘Is the safety of the community at risk?’ If at any time I get recommendations from Public Safety or CPD saying they can’t guarantee the safety, then (we won’t allow the speaker to speak),” Esteban said.

After Yiannopoulos, DePaul formed a speaker review committee that approves or denies student groups’ funding for guest speakers. Esteban promised not to interfere in the process.  “If my role is to circumvent the process, then I might as well make all the decisions,” he said.

As the president of Seton Hall, he led the effort to reintroduce a medical school to the university. The Bureau of Labor Statistics projects that healthcare related employment will rise 26 percent by 2022, and DePaul is missing out on those students who are going elsewhere for their medical degrees.

“It’s difficult to see a future of DePaul that did not include an expanded presence in the health and medical science field,” Esteban said. “What shape, form or format that takes, that’s to be decided.”

DePaul would have some tough competition from the competitive and popular medical programs at Northwestern and University of Chicago, which rank 20 and 18 nationally, according to U.S. News & World Report.

After DePaul spent $82.5 million on the new Wintrust Arena, there was hope that a brand-new stadium would attract alumni, more students and better basketball prospects.

But that isn’t what happened during Wintrust’s inaugural year.

Attendance was underwhelming and disappointing. The men’s basketball program is watching players walk out the door.

Still, Esteban remains optimistic. He insists that big changes to the men’s program won’t happen overnight, but says he sees brighter prospects in the near future.

Seton Hall finished construction on a new arena of their own shortly after Esteban’s arrival too. Six years after it opened, they made the NCAA tournament for the first time in 10 years.

In the wake of numerous controversies within the Athletic Department, he praised the good work of DePaul’s student athletes, saying that they are “student athletes,” and not “athlete students.”

“Last year our student athletes had a 3.45 cumulative GPA. Can you think of any other group of students who have that GPA?,” he said. “I understand the desire for our men’s basketball program to be good. But it’s not just about men’s basketball. The more we push men’s basketball, the more we also diminish the success of all the other sports.”

Esteban has set some ambitious goals for the university. Growing DePaul’s endowment to $1 billion by 2024, expanding university programs, increasing enrollment and creating a more attractive athletics program are among them. But seeing what Esteban did at Seton Hall, the DePaul community is hoping he will be the shepherd that DePaul needs to navigate the coming years.