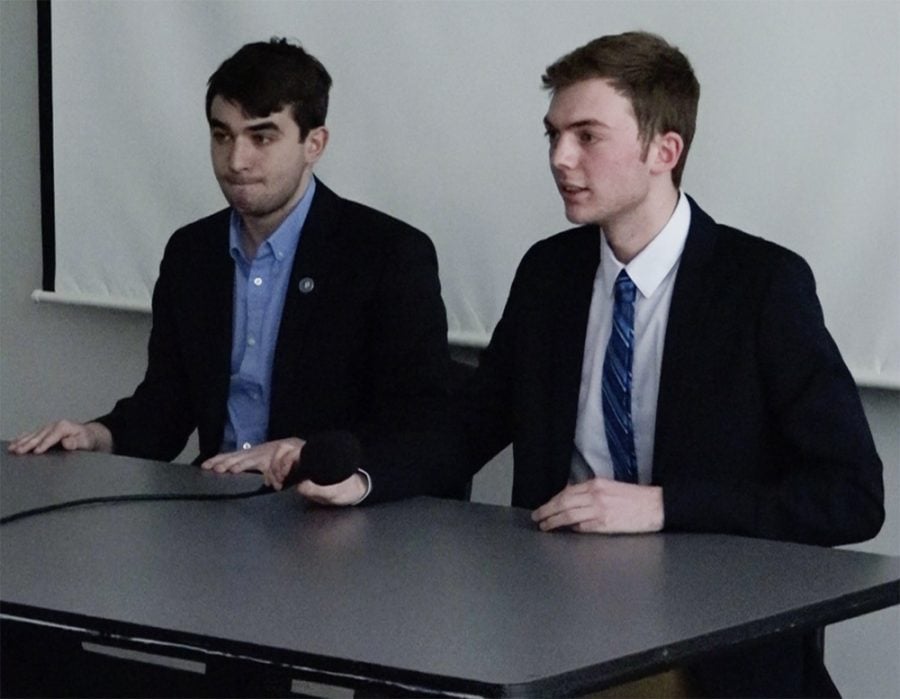 Kaufman (left) and Evans (right) went at it for over an hour during the first presidential debate. (Photo courtesy of The DePaulia)

Student Government Association (SGA) elections are in full swing and after the first debate, the candidates have taken their positions and laid out their platforms. Voting opened at noon on Sunday and the polls will close this Thursday at 5:00 p.m.

Jack Evans and Katy Bozich of the “We are DePaul” campaign have established themselves as the preferred candidates of current president Michael Lynch, with the pair earning his endorsement on Friday.

Opposing candidates Josh Kaufman and Nick Darlington, of the “DePaul for All – The Toilet Paper Party” campaign have ran a populist-style campaign. To them, poor quality toilet paper is a microcosm of larger issues as well as a common complaint they have heard from speaking with students.

The DePaulia hosted debates between the presidential hopefuls on Thursday. Although the candidates were able to find common ground on many topics, they disagree on many fundamental campus issues.

The election has not been without early drama — SGA’s Election Operations Board (EOB) held a hearing against Kaufman on Thursday evening. The Kaufman-Darlington campaign was accused by the Evans-Bozich campaign of paying student canvassers.

Candidates are given a limit of $1,000 to spend on their campaign and Kaufman planned on dipping into that fund in order to finance paid canvassers. The key piece of evidence against Kaufman came from screenshots of text messages obtained by the Evans campaign.

Emily Lane, sophomore, was one of the canvassers that Kaufman had planned on paying. She said she had “no idea” how the Evans campaign was able to obtain her messages and that it made her feel uncomfortable. Additionally, she said that it seems as though there may be an effort to oust Kaufman from the race.

“It seems malicious and I have no idea who could’ve been sending those screenshots,” she said.

At the time of the infraction, there was no specific EOB bylaw that prevented candidates from paying student canvassers. However, EOB accused Kaufman — and ultimately found him guilty — of lying to the board.

Kaufman pleaded not guilty and still contends that he did not lie, arguing that his trial was rushed and that he was not given adequate time to prepare a defense.

“While our campaign strongly disagrees with the Election Operations Board determination, we accept the warning and will continue to be as transparent as possible,” he said. “We are running this campaign the same way we plan to run our administration, and that is by doing whatever it takes within the rules to get the job done.

“Now that the rules have been changed, we will adjust our strategy to follow them. We do ask in the future for the SGA judicial board to share all the evidence that is provided with all parties before the hearing in order to have a truly fair and just trial,” he said.

The DePaulia reached out to the Evans-Bozich campaign for comment but did not receive a response.

After being issued an official warning, Kaufman’s campaign will be disqualified from the race should they be found guilty of any other infractions.

In terms of policy issues, Kaufman and Evans differ when it comes to free speech on campus. When asked if the candidates would hypothetically allow Steve Bannon to speak at DePaul, Evans said that it was not his place to make that decision without consulting other students and the speaker review board. Kaufman took a jab at Evans, saying that he would answer the question directly.

“Yes, I would definitely allow Bannon to speak on campus, even though I fundamentally disagree with him on almost everything,” he said. “But it’s our right to protest, and I encourage that too.”

Kaufman said the only reason a speaker shouldn’t be allowed at DePaul would be if they were to purposely incite violence.

When it comes to the six-year plan for the university, Evans believes the second draft will be critical to the future of DePaul.

“Those proposals are really going to impact students next year,” he said.

Evans reiterated how important it will be to cultivate relationships with faculty going forward in order to make DePaul a more equitable and inclusive place for all. He said making sure the university remains sustainable is equally important.

But Kaufman said that he is more concerned with the state of DePaul now than he is with the long term future of the university.

Another point of contention came when the candidates were asked whether or not it was possible to keep tuition the same without cutting university programming. SGA presidents sit on the tuition pricing committee and have a vote as to whether or not tuition should be raised.

Evans said that “in an ideal world” he would vote to cut tuition, but that it is a complicated issue.

“While I respect Josh’s campaign to make sure there is really nice toilet paper on campus, I think it’s far more important to be focused on scholarships on campus and to make sure students have access to those types of resources,” he said.

Kaufman said that it is “absolutely” possible to not raise tuition and that he would vote no for any increase proposal. He also responded to Evans regarding his toilet paper initiative.

“If you think that higher quality toilet paper is unreasonable to ask of a $35,000 tuition, then that is just a fundamental disagreement on what we should be allocating for.”

Evans continued to accuse Kaufman of being out of touch with the issues that are most important to students, while Kaufman said the toilet paper represents a larger idea that students aren’t getting what they ask for from the university.

Students can vote on votesga.depaul.edu by using their Campus Connect information. To see the debate in its entirety check out The DePaulia’s Facebook page for the full hour and a highlight reel. The DePaulia will also be hosting a final candidate forum Tuesday.

Amber Colón and Benjamin Conboy contributed to this article.