Joy is Coming: Take Back the Night gives platform to survivors of sexual violence 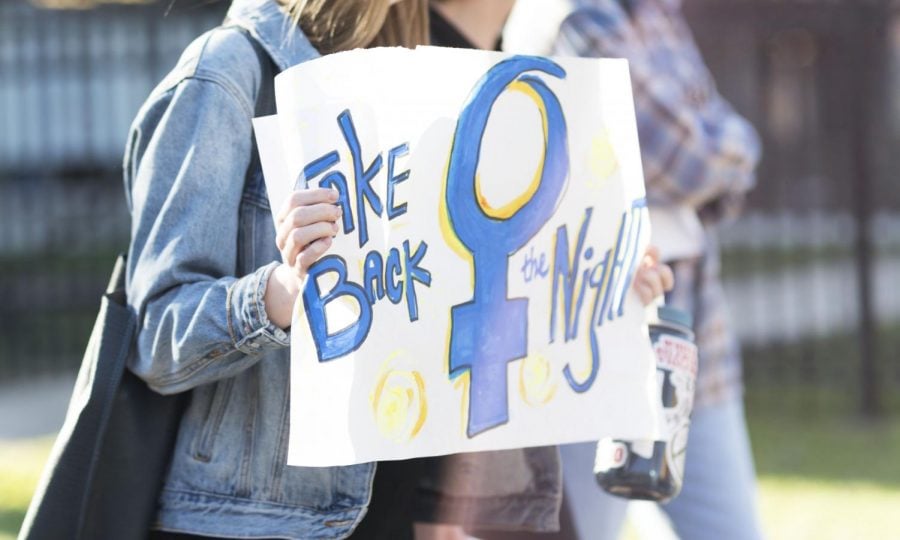 On Wednesday evening, in room 302 of the Arts and Letters Hall, an intimate moment was taking place.

Sitting in a circle gathered around bunches of white flowers, a heart shaped stone with the word “healing” engraved on its face and a glass figurine of a pink swan, fellow graduate students Fabiola Rosiles and Jax Witzig had just finished leading a community support circle.

A few classrooms down the hall Ann Russo, Director of the DePaul Women’s Center and Hannah Retzkin, a Sexual and Relationship Violence and Prevention Specialist, did the same.

It was all a part of DePaul’s annual Take Back the Night event, where students were able to come together in a safe space to discuss sexual assault and reflect on its aftermath.

In their closing remarks after a heavy session of discussion, Witzig cited a line from poet Kim Addonizio’s “To the Woman Crying Uncontrollably in the Next Stall”: “Listen, I love you. Joy is coming.” As Witzig finished reading, the group of assembled students wiped away tears and attempted to compose themselves.

“Something about it almost makes me cry whenever I think about it because I feel like joy feels so far off sometimes when you’re a survivor,” Witzig said. “It feels incomprehensible, like you can’t experience that again, and that’s why I wanted to close out the event with this quote. It is possible to feel joy again and in fact it’s already on its way.”

In a way, Addonizio’s last line captured the sentiment of the event: No matter someone’s gender or sexuality, whether straight, gay, trans, gender nonconforming, genderqueer, or anything else, the trauma for survivors – not victims – of sexual violence will subdue with time, and healing will persevere.

At DePaul it is the hallmark event of sexual awareness month, but Take Back the Night is a yearly tradition on college campuses nationwide. Beginning in March of 1976, the Take Back the Night Foundation is a nonprofit organization that aims to bring public awareness to an unfortunate reality that many university students experience during their college years: that of sexual assault and sexual violence.

“I always think of sexual assault as this ink stain that spreads and touches all of us no matter what, even if we think we don’t know anyone. And if we’ve never experienced, it still impacts us, so this event is very visible in public,” Retzkin said. “It shows that sexual violence is not tolerated and we want to move forward with creating a society in which that does not happen. We’re all part of the problem, but we’re part of the solution too.”

This year at DePaul, organizers of Take Back the Night decided to take an intersectional approach to the pervasiveness of sexual violence on college campuses.

By taking an intersectional approach to sexual assault, the organizers sought to bring to light many other forms of injustice, all of which can be mentally, emotionally and physically traumatic to an individual.

The intersectional theme was fitting, since it also reflected the organizing process behind this year’s Take Back the Night event; for the first time at DePaul, it was not organized by student group Feminist Front, due to most students having graduated, but rather by a number of on-campus departments.

Retzkin from the Office of Health, Promotion and Wellness and Russo from the Women’s Center stepped in, working together with the Office of Multicultural Student Success, Fraternity and Sorority life and the Department of Residential Education to make the event happen.

While Retzkin and Russo have been planning Take Back the Night since February, on April 25 the day began with two students from the Women’s Center putting together the 20 anonymously submitted stories from students in which they recounted instances of sexual violence in their lives.

The stories were taped next to affirmation art pieces on three white boards, which each contained a word from the phrase, “We Believe You.” The art installation served as the backdrop for the rally that took place in the pit of the Schmitt Academic Center. Promptly at 5 p.m. students and passersby took a seat to listen to survivors’ stories.

One of the speakers was Amy Weider, a founding member of Students for Reproductive Justice. She vocalized her grievances with DePaul’s lack of sexual health support.

“Awareness only does so much. I’d like to ask DePaul, where is my free STI testing on campus for me after my rape or whenever I need it? Because if you choose not to hand out condoms for your students’ sexual health, you better be prepared to deal with the aftermath.”

Student and Clifton-Fullerton RA Kelly Garcia spoke on behalf of the office of Residential Education.

“The bridge between survivors and professional staff members has often been hard to cross. It has often been overburdened with administrative red tape and silence (…),” Garcia said. “The department of residential education is not perfect. Even as student workers we make mistakes, but we will also make waves, creating spaces of community and safety.”

After people shared their stories and expressed their support, the rally dispersed. Around 20 students filed out of the SAC onto Kenmore Avenue. with Retzkin leading the group of chanting students carrying handmade signs.

The march ended in the Arts and Letters Hall, where Russo and Witzig were waiting for the marchers to begin the second portion of the night: the community support, or healing, circles.

“This event proved to me that I am not alone, that there are so many people literally around the world that are rooting for survivors and just wanting us to have these beautiful luscious futures,” said Witzig. “I think events like these really prove to people that you can come together and really care about each other. These events don’t happen enough, but at least they prove something. They prove these connections exist.”