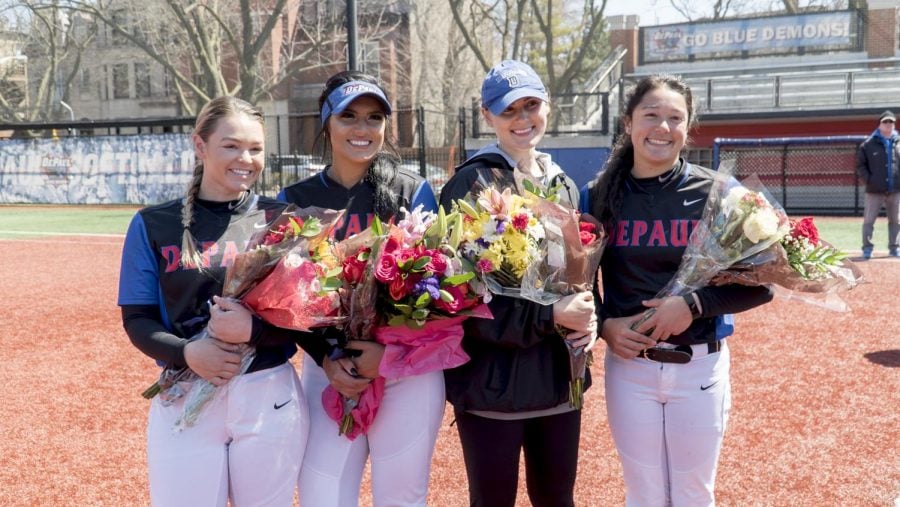 It was a bittersweet day for all involved as DePaul finished off a sweep of Butler with a 9-3 victory Sunday afternoon before honoring their four seniors Haydn Christensen, Kennedy Garcia, Kayla Landwehrmier and Megan Leyva following the game.

DePaul head coach Eugene Lenti said senior day is always filled with mixed emotions because of the time spent helping players grow both on and off the field, but added he’s proud of what they’ve contributed in their time on campus.

“They’ve been great additions to the program, they embody what it means to be a student athlete,” Lenti said. “All four have been All-Academic Big East, they have a great cumulative GPA over 3.5 as a group, they’re all going to move on to do great things, sociology major, psychology major, biology major, health sciences major they’re going to have great futures. They came in here as young girls just ready to learn and hungry to learn and they’re leaving here as brave, bold, confident women.”

On the day DePaul honored the four seniors, it was sophomore center fielder Angela Scalzitti who delivered a big grand slam to cap an eight-run third inning for DePaul. Lenti said he was pleased to see Scalzitti come through in a big moment, and showing her game evolving.

“Well I liked mostly Angela’s grand slam, that’s what I really liked,” Lenti said. “Angela has been a slapper, small-ball player her whole career until this year we started letting her start swinging away, we always knew she was capable of doing that and it was a great moment for all of us.”

The grand slam gave DePaul a 9-2 advantage after Butler grabbed the lead on a home run in the second inning by Claire Gilliland. Christensen said she was proud of how the team overcame some early deficits this weekend, especially with the conference tournament approaching.

“We really battled back, we were kind of neck and neck in a lot of the games, very close one run, two runs,” Christensen said. “There was always that one inning where we break through and really took the lead and kept the lead and that’s really important because we just played St. John’s which was really long innings obviously 11 innings, 10 innings, in this one we were able to put them away in seven which is really important going into Rosemont in a couple weekends.”

Sunday’s starter Garcia said she battled some nerves early on, but said this was a big win both personally and for the team in a close conference race with Creighton.

“For me personally it’s senior day so I did have the jitters,” Garcia said. “This is a major win especially this year the competition is super tight, every inning, every win counts. I feel like this is also a big win for me too because last year this was one of the teams I struggled with personally so coming out and getting the sweep is amazing.”

Garcia, who joined DePaul after two years at Phoenix College, said leaving her teammates behind after two seasons is a similar feeling to the one she had in junior college.

“They’re all my sisters,” Garcia said. “It kind of sucks coming from a JUCO it’s sort of the same experience you get close to girls for one or two years then you got to leave, same with here, I get close with all these girls I love them with all my heart then I got to leave, but we’re making the best of it so we still have so many more games to play.”

Christensen echoed Garcia’s appreciation for the school and said she’s excited, but sad for the next chapter of her life that for the first time since she was a child won’t include softball.

“It’s definitely bittersweet,” Christensen said. “It’s really exciting to know that I’m going to start this next chapter of my life, but it’s also really sad because I’ve been playing softball since I was four years old and I love the girls on my team and it’s going to be interesting to see what’s coming next.”

With the win, the Blue Demons extended its winning streak to five games, while Garcia picked up her sixth win of the year allowing just two earned runs on four hits while striking out five Bulldogs.

DePaul’s marathon homestand, that lasted over a month after their road game at Creighton was cancelled due to weather, comes to a close Wednesday with a home game against crosstown rival Northwestern. Lenti said the team will use that as an opportunity to continue getting sharper in all three phases after making four errors in three games against Butler.

“As coaches we are never totally satisfied 100 percent,” Lenti said. “We love the fact we win, that’s what matters the most is the end result. Little bit sharper in our at bats, a little bit sharper everywhere, we’ll take tomorrow off and have a good practice on Tuesday and use Wednesday against Northwestern as a good gage, we’ll probably have all three pitchers throw seven outs or whatever so they can stay kind of sharp and hope that carries us into a good weekend against Providence.”

Last season, the Wildcats blanked DePaul 8-0 in a game that got away from them in the sixth inning.