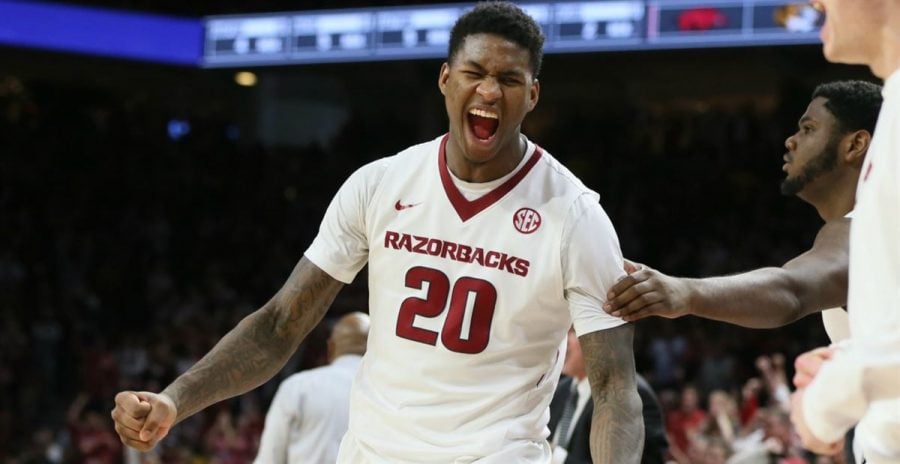 Darious Hall says DePaul presents him an opportunity to make it the next level. (Nelson Chenault | USA Today)

The DePaul basketball program has enlisted help on the wing for the future.

Arkansas transfer Darious Hall announced on Twitter Wednesday afternoon that he has committed to DePaul.

“I would like to thank God for this position he has allowed me to be in, and my mother who has supported and helped guide me through this process,” Hall said. “Also, I’d like to thank all the coaches who have reached out since learning about my transfer over the last month. It has been a challenging decision (…), with that being said, I’m announcing that I will be committing to the University of DePaul. Go Blue Demons.”

Hall visited the program on April 22 and said the city, atmosphere, coaches and food were among the reasons he opted to join the Blue Demons.

“I was excited,” Hall said. “I felt like I was moving on in my life to a better chapter and they made me feel like home.”

On his visit, Hall spent time with players on the team, as well as head coach Dave Leitao and assistant coach Tim Anderson who sold him on the professional opportunities he would have at DePaul.

“I’d be coming into a good opportunity for me to be able to get to the next level,” Hall said. “They really just told me a lot.”

In his freshman season with the Razorbacks, Hall started five games but spent most of his time coming off the bench, where he averaged 14.8 minutes per game on an Arkansas team that reached the NCAA tournament. He averaged 5.1 points per game on 53.1 percent from the field to go along with 3.1 rebounds per game. He showed a shred of a budding 3-point shot, finishing the season 13-32 on 3-point attempts.

Hall said getting to the NCAA tournament as a freshman was a memorable experience and it’s one he plans to replicate at DePaul.

“It was great, it was my first year,” Hall said. “I plan on getting back there and it was just a great experience.”

Hawgs 247 senior writer Otis Kirk, who covered Hall at Arkansas, said DePaul is getting a solid player who was expected to be a major contributor for the Razorbacks next season.

“He’s very athletic. He’s a good basketball player. They got a good one,” Kirk said. “I’m pretty sure he would have started next year. I thought he’d be an established starter next year; he only played a little over 14 minutes per game this year but a lot of people felt he should have played more. He’s very athletic.”

Kirk added that while Hall may not stand out, he’s a solid all-around player that was among the Razorbacks more dependable players last season.

My mama ask me how it feel to be in this position To be honest mama, I swear that this just the beginning Then she said baby don’t you stop ’til you at the finish Don’t forget you came a long way from them trenches ??#Doitforpopz #slatt?? pic.twitter.com/2T6EpjY3hy

“Hall was much more consistent,” Kirk said. “You kind of knew what you were getting out of Darious at the minimum, and sometimes he gave you more, but you knew you were going to get some good minutes out of him.”

When Hall joined Arkansas, he was ranked as the No. 4 player in the state and the No. 50 power forward overall in the 2017 class according to 247Sports.com. This came after three All-State and All-Conference selections, as well as, being named the 2017 5A State Tournament MVP.

Due to the current NCAA transfer rules, DePaul will have to wait to see Hall in action, since he will sit out the 2018-2019 season before having three years left to play.

Hall said he is eager to use this year to get better as a player, as well as adjust to a new school.

“That is going to be the best year for me,” Hall said. “I’m going to be able to get in the gym all year and then I will be able to practice with the team, and I’ll be working on my game and working around pros and stuff.”

Kirk agreed sitting out this year should help Hall develop as a player, and believes he will be able to come in and help the Blue Demons next season.

“I think he can come in and help DePaul next year,” Kirk said. “I think he would have started at Arkansas next year, so I don’t think it’s an absolute necessity he had to sit out next year. But I think that year will benefit him big time.”

After attending high school at Mills University Studies in Arkansas and then staying home for his first year of college, Hall said he is looking forward to a new opportunity out of state.

“I think I’m very mature,” Hall said. “I think it will be great being away from home and being able to see and experience a lot of different things I’ve never seen before.”

The men’s basketball signing period runs through May 16.