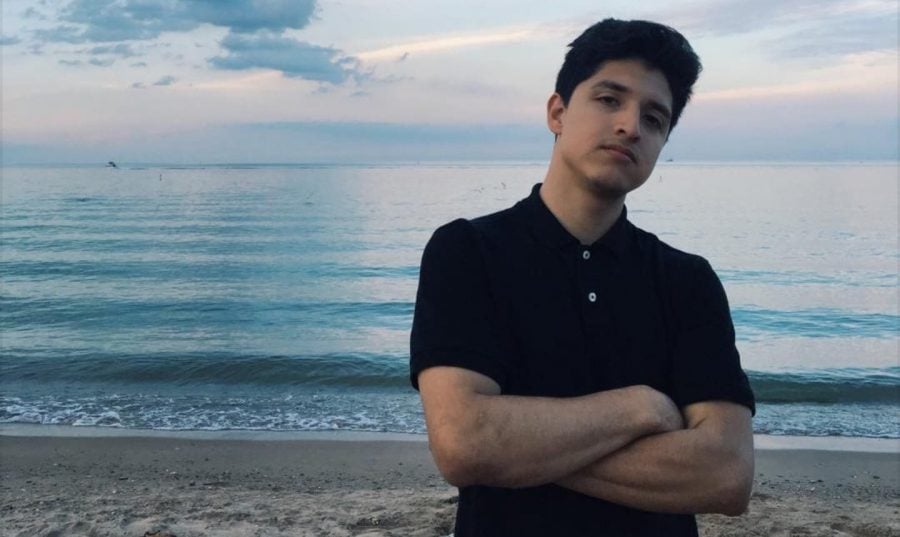 Ricardo Quiroz studied finance at DePaul and was set to graduate in June. Quiroz had high hopes of helping his family become financially stable. (Photo courtesy of Alex Quiroz)

He was born laughing.

Maria Quiroz, mother of DePaul student Ricardo Quiroz, said that her son will be remembered as someone who was always very happy.

Quiroz, 24, was struck by a CTA Red Line train on Sunday, April 15 at 8:01 a.m. on the Near North Side. He was taken to Northwestern Memorial Hospital in critical condition where he died at 1:25 a.m. the following Tuesday.

The train’s conductor was also taken to Northwestern for a psychological evaluation, according to Chicago Fire Media Affairs.

Set to graduate in June, Ricardo got his associate’s from Truman College before transferring to DePaul about two years ago.

“He was excited to be at DePaul,” said Kenton Klaus, a professor in the Driehaus College of Business.

Klaus had Ricardo in class last spring quarter for a career management course. He said he remembers Quiroz as a student who was “very sincere” and “very enthusiastic about life after college.”

“The students I remember make an extra point to see me (…) to be successful in their career search,” Klaus said.

Now, over two weeks later, the Quiroz family is still waiting to hear from the Chicago Police Department (CPD) or the Chicago Transit Authority (CTA) about the cause of their son’s death. If Ricardo was pushed, if he fell, or if something more malicious occurred is still unclear.

“The police haven’t told us anything,” Maria said. “The only thing that my husband retrieved in the hospital was his bag. The police told us that they couldn’t contact us because they did not have our information.”

But Ricardo had his license, his Social Security card, his student ID and his credit cards on him.

“We are very suspicious of what happened,” Maria said. “(The police) haven’t bothered to call us.”

Maria said that Univision Chicago called her family on Thursday to ask if they’d like to pursue an investigation to find out what really happened.

Not even the CTA has reached out to the Quiroz family.

“The least they could do is show us the video footage of what happened, how (Ricardo) ended up on the tracks, how much time he spent there,” she said. “There’s much here that doesn’t make sense.”

Maria said that even Ricardo’s hospital records are faulty; two different times of death are listed.

“We’re okay now because there is nothing more that we can do,” Maria said. “He is already gone. We only want to know what happened in his last moments.”

Eloy Quiroz, Ricardo’s father, said that his family is going to be seeking out a lawyer to find answers. Eloy said that he wants communication between his family and the authorities to be made more clear.

“I’m certain that this was an accident because he didn’t have a single enemy,” he said. “That’s what we know and believe.”

An alum of Kelly High School, Ricardo grew up in Chicago in the South Side neighborhood of West Lawn. Ricardo was a member of Midwest Association of Hispanic Accountants (MAHA). In his free time, Ricardo would skateboard with his younger brother, Alex, and their friends.

“He wanted to create financial stability for our parents not only in terms of providing for them but assisting them with their finances,” Alex said. “My parents are immigrants (…) we’re first-born U.S. citizens, so he cared a lot about the stability of our family.”

While Ricardo was attending Truman, he worked part-time with his father, who works about 60 hours a week at a nearby bread factory.

Eloy moved to Chicago from his home state of Puebla, Mexico in 1988. Several years later in 1993, Maria joined him and the couple had their first son, Ricardo.

Maria, who is from the state of Mexico, got her degree in business administration. Today, she works as an aide for special needs students in Chicago Public Schools (CPS).

Maria said that Ricardo would always make it a point to ask his mother about her day, since her job can be very emotionally taxing.

“He always hugged me when he got home and he said, ‘Mom, you don’t know how much I love you,’” Maria said.

The two would go back and forth, arguing over who loved the other more.

“That’s why I don’t understand why he left us so soon,” Maria said. “He had a very forward-moving life. He wanted to travel and he had plans to go to Australia. He was a very loving kid and very responsible.”

“I would say he was the glue (of our family),” Alex said. “He’s just a compassionate and empathetic person.”

Maria said that her children were a trio — they did everything together. Alex, in particular, always followed Ricardo’s lead. She said that Nancy, the youngest of the family, always had lots of dolls of her own, but she rarely played with them because she was always playing with Ricardo and Alex.

“Me and my brother identify as skateboarders. We love skateboarding,” Alex said. “That’s what we spent the last ten years of our life doing and working towards, is just more time skateboarding together. I’d like for him to be remembered as a kind-hearted, funny dude.”

Ricardo always had an adventurous and carefree spirit. He had plans to visit Australia and get to know Europe.

“It’s very hard to live with this,” Eloy said. “He had a lot of goals, he was very responsible. He had a bright future.”

In January, his father said, he had two jobs where he was working full-time and went to school full-time. Sometimes, he would work weekends doing valet parking.

Eloy said his family will feel more at peace once they have more answers. He said that he is seeking justice because he does not want something like this to happen in the future and for it to go without being investigated.

“He didn’t deserve this,” Eloy said.