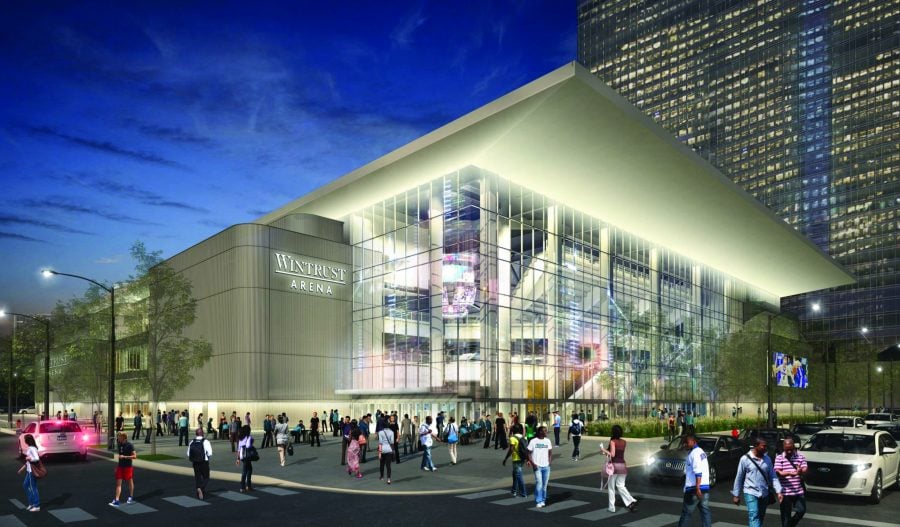 A rendering of Wintrust Arena from the southwest, showing what the name will look like. (Photo courtesy of DePaul Athletics)
Paul Steeno, Sports Reporter

If athletic programs determined financial aid by how polite a recruit was, the DePaul Blue Demons newest basketball commit Josh Ozanne would instantly receive an upgrade from a preferred walk-on to a full ride.

“That’s got to go back to my parents,” Ozanne said in a phone interview Saturday evening about the origin of his manners. “Ever since I was a little kid you always say please and thank you. You always refer to adults by their last name. You always want to be respectful and humble. Those things will take you a long way.”

Via his Twitter account, the 6-foot-3-inch Ozanne announced his commitment to DePaul as a preferred walk-on Saturday morning. He hails from southwest Cleveland and plays shooting guard.

It’s an improbable jump to the Division I level for a guy who played only two years of varsity basketball for the Saint Ignatius Wildcats (Ohio City neighborhood in Cleveland) during his prep career. To further accentuate that underdog narrative Ozanne wasn’t even a starter at Saint Ignatius, instead filling a sixth-man spark plug role. But his high school coach Brian Becker said this was a calculated decision and didn’t undermine his value as a player.

“Josh was our sixth man for one reason in my system, I like to have a bigger confident scorer that can come off the bench to impact the game quickly,” Becker said. “He actually played more minutes than three starters. I used him to create multiple mismatch situations and his unselfish attitude allowed him to excel in this role. He enjoyed competing versus various size players.”

The underdog narrative carried over to AAU ball as well. Ozanne played for an obscure AAU team, Murphy AC, as opposed to one of the more renowned AAU teams on the Nike Elite Youth Basketball League circuit.

But avoiding the trappings of stardom in high school has placed a chip on his shoulder that has benefited him through his basketball journey so far.

“As a kid I struggled with my confidence and I’ve always been one who puts my head down and goes to work,” Ozanne said. “Working is what I want to do so I definitely feel a huge sense of pride knowing that I can do this, I don’t care what they say. The whole demeanor there just knowing that if I work hard good things will come and they finally worked out. Moving to the next chapter, I’m going to have to prove myself at the Division I level as well.”

Ozanne self-described himself as an energy guy who is a solid defender and a good athlete who can slash his way to the rim. Becker said via an email interview that Ozanne’s shot is better than he gives himself credit for describing Ozanne’s mid range and 3-point shooting as “solid.”

With more shooting at DePaul this season (Jalen Coleman-Lands, John Diener, and a hopefully improved Austin Grandstaff) to space the floor for driving opportunities, the complexion of the roster could play to Ozanne’s strengths if he gets playing time during his true freshman season.

With noted defensive stalwart Brandon Cyrus transferring away from DePaul at the end of March, there is also a need for a good perimeter defender to fill the void he left. Plus, head coach Dave Leitao has a soft spot for players who can defend.

“I’ve said this for the last two years that the game has changed all over the globe,” Leitao said in December after a loss to Villanova. “And there’s such a high premium on shooting and offense that sometimes I feel a little bit like a dinosaur, because defense and rebounding has meant everything to me, and it still does but at the same point in time you’ve got to be able to hit shots.”

On the flip side of the coin, earning playing time could be difficult for Ozanne with incumbent starters Eli Cain and Max Strus virtual locks as starters next season and upperclassmen Coleman-Lands and Grandstaff also playing the same position he does. Leitao was also reticent to rely too heavily on freshmen last season.

Plus, Ozanne will need to compete for playing time with guys from his own class. Indirectly, big men Mick Sullivan and George Maslennikov and more directly the sharpshooting Diener who also plays shooting guard. Point guard Flynn Cameron who arrived at DePaul in January from New Zealand (he went to high school in Australia), but never played in his first season as a Blue Demon also has a full four years of eligibility to burn through.

However, his athletic experience in high school means Ozanne isn’t coming to Chicago expecting Leitao to hand him playing time.

“The feeling in Cleveland is nothing is given to you, I’ve had to work for all my recognitions,” Ozanne said. “I definitely consider myself a self-made person. I definitely like to work for what I need and I definitely feel going into Chicago that nothing will be given to you, you have to go and take things. (The similar culture of the two cities) played a huge role I think [in my decision to come to DePaul].”

While he has always had his heart set on playing basketball in Chicago, he said he’s not going to shed his Cleveland connection nor his love affair with the city’s NBA team and its star when he relocates to the Windy City.

“LeBron [James] took it upon himself to come to a few of their games (Garfield Heights one of the top teams in the area) and he’s been to many games throughout the high school area bringing J.R. (Smith), Dwyane Wade, [and] a bunch of other guys,” Ozanne said. “That definitely brings the city together seeing arguably the greatest player in the world right now coming to watch high schoolers play [when] nobody is asking him [to go]. If he cares about me, then I definitely care about him and people want to go watch the Cavs game so that just brings everybody together with the connection both ways. He’s definitely inspirational. Definitely makes people want to work harder to try to get to his level.”

Couple his already well-established work ethic with a sprinkling of please and thank you’s and other pleasantries from his arsenal of manners, and Ozanne could be on the fast track to collegiate success. After all, he’s thrived in the underdog role his entire basketball career, why would that change now?