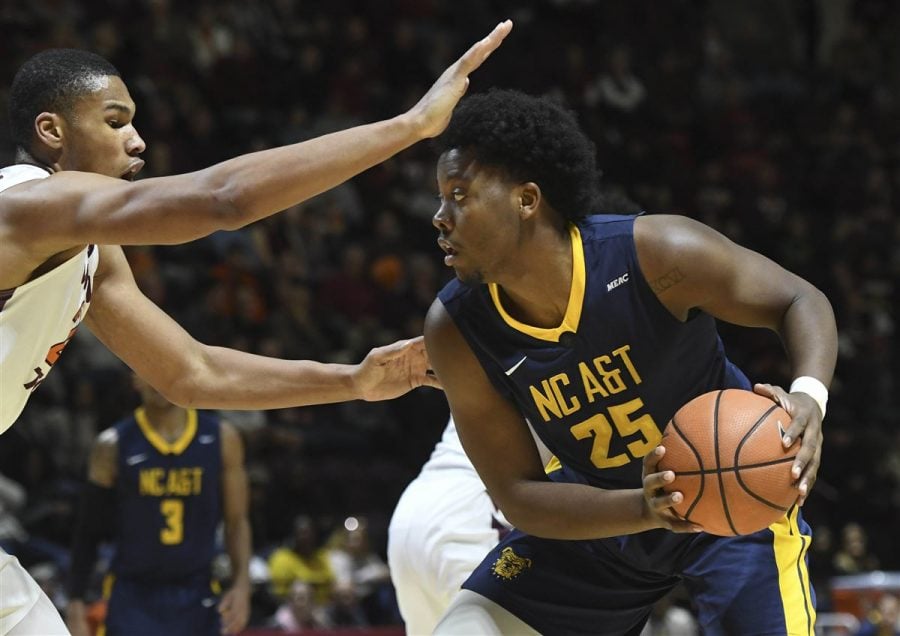 For the second week in a row, DePaul picked up a transfer Monday afternoon when North Carolina AT&T graduate transfer Femi Olujobi announced he would become the latest to join the Blue Demons.

Olujobi pointed to the connection he developed with the coaching staff and current players during his visit as key reasons for picking DePaul.

“Everybody on the team, it felt more like a family,” he said. “That was big in my decision because I want to be part of something strong, close knit. The most successful teams are the ones that are closer.”

Olujobi also didn’t shy away from the challenge of helping DePaul, a program that has had six straight 20- loss seasons. That’s similar to what he experienced at North Carolina A&T, where the team had just three wins during the year he sat out before a major turnaround saw them winning 20 games this past season.

“I want to be that piece that helps them get over the edge and back to the NCAA Tournament hopefully.”

While he didn’t play during the disastrous season for A&T, Olujobi said he felt the pain, and he learned he has to focus on having a good mindset every day while being ready to work hard. From there, Olujobi said everything in terms of performance will take care of itself.

Although Olujobi has developed a good relationship with all the coaches on the staff, he communicates with DePaul head coach Dave Leitao on a daily basis. He says he admires Leitao’s personality and the way in which he treats Olujobi not only as a basketball player, but as a person.

“When we spoke in the recruiting process a lot of it wasn’t about basketball, it was just more so about how my day was going, how I was handling everything and stuff like that,” Olujobi said. “I feel like he will be a great mentor and someone to really learn from because he carries himself well.”

When he was walking around campus with Leitao on his visit, aside from feeling as though he was back in his hometown of Long Island, N.Y with the city feel, he was impressed with the support Leitao received throughout campus and how he embraced everyone around him.

“The way he carries himself,” Olujobi said. “That’s the way I would like to carry myself also, so just learning from him and being around him, I feel like not only will it benefit me as a basketball player but just benefit me as a person in the long run.”

Olujobi chose DePaul over Georgetown, Butler and Hofstra, the other schools included in his top four. He will be immediately eligible and will help fill the void left by Marin Maric and Tre’Darius McCallum, who both graduated. Olujobi said knowing the that the opportunity to play early was available helped in his decision to pick DePaul, but he was confident he would have earned playing time either way.

“I did want to go somewhere where I knew I had the opportunity to be on the floor,” Olujobi said. “Also just me being the competitor that I am, I pretty much knew wherever I went I was going to get on the floor somehow, so it didn’t really play too big of a role in it because at the end of the day nothing is guaranteed.”

Olujobi added that he knows how he performs will dictate his playing time but is excited to come in and earn minutes.

“I control my own destiny as far as playing time,” Olujobi said. “I have to go earn that but it was just being somewhere I had the chance to be successful and help others around me be successful, piggy back off one another and to help each other be better and accomplish our dreams together.”

The Blue Demons will be the third school for Olujobi, who began his career at Oakland before transferring to NCAT where he enjoyed a breakout season averaging 16.3 points and 7.7 rebounds per game, while starting in 28 games.

Jeff Mills, a sports writer at the Greensboro News and Record who covered Olujobi this past season, said one of the biggest reasons he saw for the breakout was simply the 6-foot-8-inch forward getting the chance to be on the court.

“The jump he made was he just got the opportunity to play and play consistent minutes,” Mills said. “It was a case where he believed in a new second year coach (Jay Joyner), and a coach believed in him, and so they threw him out there.”

Olujobi started fast averaging 21.8 points per game during conference play before becoming the focus of every team’s gameplan.

“When they got into league season, the rest of the league basically decided that they weren’t going to let that kid beat them,” Mills said. “So he got doubled and triple-teamed virtually every MEAC game.”

Olujobi said he’s a willing passer, but had to learn early in conference play how to deal with double teams, while staying aggressive.

“From seeing them a lot I know how to beat them and I know how to put myself in a good position, and it helps me read the floor better and become a better playmaker,” he said. “I love passing the ball, so if a double team comes and they show the double team I can surely find the open person and help get them an easy shot.”

Known for his rebounding and ability to score the ball, Olujobi said he is also just simply a competitor ready to do whatever it takes to help his team win. Heading into his final year of eligibility with the Blue Demons, Olujobi said his biggest focus will be being able to play with an all-out intensity during the entirety of when he’s on the court.

“Definitely conditioning, I just have to become better condition-wise,” Olujobi said. “Just being able to exert my best effort. I (physically) couldn’t play harder and I just want to make sure I give my all 100 percent, 110 percent, the whole 40 minutes of gameplay.”

When Olujobi committed to DePaul, he talked about being ready to terrorize the Big East when he arrives on campus in mid to late June; five days later, the message was very similar.

“I’m just ready to show them what DePaul basketball can do,” he said.