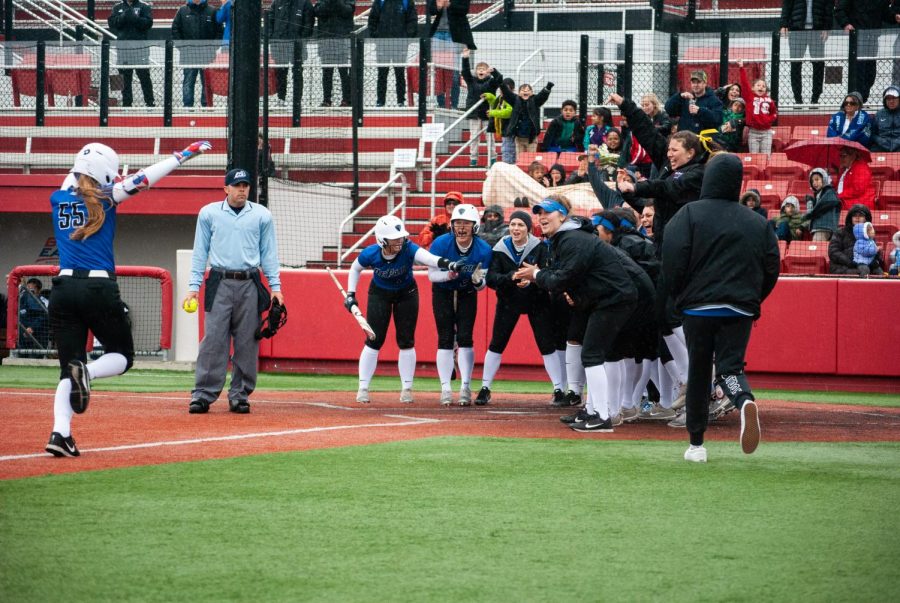 For the second straight season, DePaul will play for a spot in the NCAA tournament Saturday afternoon following a 12-2 win over Villanova Friday afternoon, marking their fourth run rule victory over the Wildcats this season.

Trailing 2-1 entering the third inning, the Blue Demons put up six runs in the bottom half of the inning capped off by a three-run home run from Angela Scalzitti to open up a 7-2 lead. The inning opened with three straight walks followed by an RBI groundout from Morgan Greenwood and run scoring hits from Megan Leyva, Alysia Rodriguez and the big blow from Scalzitti.

The Blue Demons came right back with five more in the fourth. DePaul head coach Eugene Lenti liked both the patience and aggressiveness his players showed in those two innings.

“I think we just had better approaches at the plate, we drew walks when we had them and we hit the pitches that were over the plate for strikes and that’s the key to having a quality at bat,” Lenti said. “If they’re not going to throw you a strike, then draw a walk, if they throw you a strike you want to hit it hard.”

Scalztti, who has shown some power late in the season, said hitting a home run at Rosemont was an exciting moment for her.

“That was pretty cool in Rosemont, it’s a pretty far fence and pretty high,” Scalzitti said. “I was looking for a good pitch to hit and it was just fun.”

The Blue Demons also got a good performance on the mound from sophomore Missy Zoch, who pitched all five-innings striking out six batters and only surrendering the two runs on a home run in the second inning to Dana Morris.

It was a tough day for both pitchers with rain delaying the start of the game, and intensifying at points during the game. Lenti said he was happy with the way Zoch kept her team in the game allowing the offense to get going.

“It’s a great outing in this kind of weather, the ball is slippery no matter what you do to it and it’s really tough to pitch in this type of environment, as you can kind of see from there side also. She only had the two bad hitters; the kid drew the walk on four pitches and then she gave up the home run,” Lenti said. “We always say give us a chance to defend the ball, we have a great defense, give us that chance and good things are going to happen. She recovered from it, she forgot about it and went on to the next thing.”

Zoch said the rain made it tough to pitch, but also heightened the importance of relying on her defense. The Blue Demons defense responded without an error on the day.

“It was very tough,” Zoch said. “I was just trying to get it over the plate somewhere so if they do hit it, hopefully they will hit to one of my teammates. I had one mistake that went over the fence but then I settled down, realized my teammates were there behind me 100 percent, that’s when I started getting more hits right to them.”

After surrendering the home run in the second inning, the sophomore right-hander admitted she entered the game with some nerves given the stage, but settled down to allow just two hits in the last three innings.

“I was a little nervous just coming in here at the beginning,” Zoch said. “That’s why I had two crazy first innings but I think after that it was a lot better, I settled down.”

The Blue Demons will now face Creighton as they look to return to the NCAA Tournament for the first time in back-to-back seasons since the 2011 and 2012 seasons. Lenti said the key Saturday will be simply continuing what they have done much of conference play.

“I think we just have to stay on the path we’re on, get good solid pitching, great defense and timely hitting, that’s the key to winning in the postseason,” Lenti said. “The teams that do that are the ones that are going to survive and advance.”