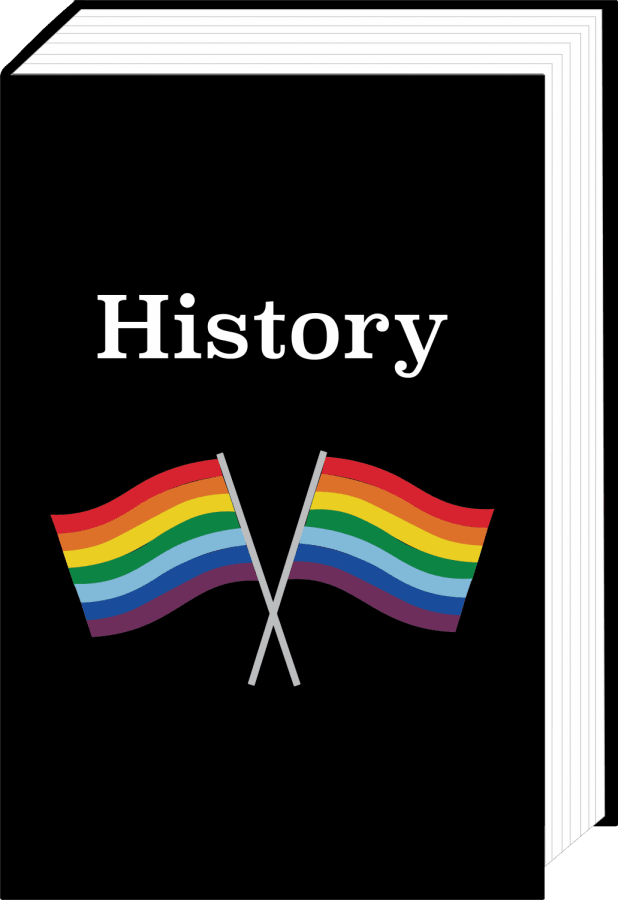 Graphics by Victoria Williamson | The DePaulia

Currently there is a bill that was advanced into the Illinois House earlier this month that is waiting for approval to be pushed forward that would mandate the lesbian, gay, transgender and bisexual histories to be taught in classes across the state.

The bill would require that LGBT history be worked into the current curriculum for both American and state history courses throughout schools. The focus would largely be on the contributions of prominent LGBT people in American history.

State Sen. Heather Steans, D-Chicago, was a leader in pushing the amended bill through Senate, saying in an interview with Illinois News Network that the bill aimed to get school curriculums to talk about LGBT histories “like it does for many other populations in this state.”

The bill has not been without its opponents. Many, including state Sen. Chuck Weaver, R-Peoria, have said that the bill could hinder “religious freedom” for students who may disagree with the topics that are discussed in the new curriculums.

Other groups have said that the new law would be able to take the choice for each local school board to decide what is taught within their schools and gives the power to the state – a controversial measure that has been hotly debated across the United States.

“We have a clear directive from our membership to oppose all curricular mandates that come before the General Assembly,” said Zach Messersmith, Director of Government Relations for the Illinois Association of School Boards (IASB). “We believe that locally elected school boards should be able to determine curricula for their students as long as it meets Illinois Learning Standards.”

Kamila Zaremba is a DePaul student who is currently working as a high school history student teacher. She said that while LGBT history needs to be taught, she agrees with the IASB that  the state shouldn’t be mandating certain lessons.

“My hold up with this passing is mostly what it will mean as yet another mandate set forth by the state for teachers to teach,” Zaremba said. “What the passing of a specific curriculum usually means is that teachers have to teach the particular lessons that were required by the state.

Ultimately, if there is a continuation of different curricula becoming

mandated, teachers lose any shred of autonomy left in the classroom and teach predefined lessons.”

Zaramba also believes the new curriculums would place additional difficulties  on teachers, who would have to incorporate the lessons into their already busy schedules without receiving any more in-class time in which to do so.

“There is also a worry of how to fit in the entire history of the United States into less than 180 days,” Zaramba said. “Most teachers barely get around to the Civil Rights Movement at the end of the year. It feels as if the requirements are never-ending, but the funding for proper resources is not there, nor is there then an extension of time.”

Illinois is not the first state to introduce a bill such as this one. California enacted a similar LGBT education law in 2017. The bill was followed by 10 textbooks being approved for use within public classrooms that would focus on LGBT and people with disabilities in K-8 history classes. Should Illinois pass its own LGBT education bill, it will be only the second state to require LGBT history to be taught in public schools.

The bill is currently waiting to be approved by the House. Regardless, many have used this as a catalyst to help promote private schools within the state. Zarambe said she has already witnessed a principal of a Chicago-area Catholic school trying to recruit new students using the bill.

“The purpose is to teach tolerance and simply that the LGBTQIA+ community has also made an impact on American society and it should be elaborated upon,” Zaramba said.