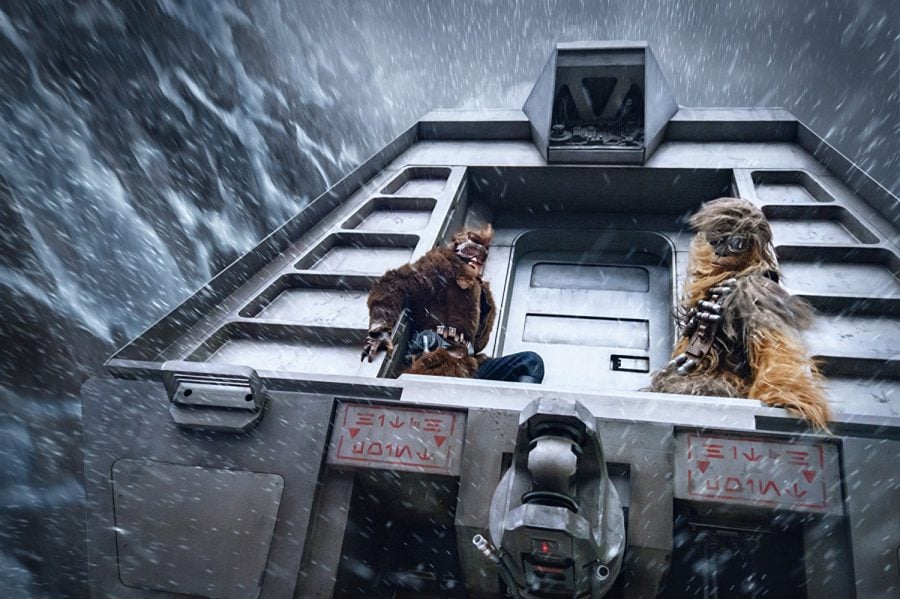 Alden Ehrenreich stars as Han Solo years before he joins the Rebellion.

With “Solo,” we are now officially four years/movies into Disney’s reign over the “Star Wars” license. It started with a familiar, yet fun feeling in “Force Awakens.” “Rogue One” wasn’t groundbreaking as a film, but it was intriguing to see what the plan was for these stand-alone “Star Wars” films that are not part of any larger trilogies. Then, “Last Jedi” drove a hole in the fan base so large, the Sarlaac got jealous.

“Solo: A Star Wars Story” is not the first spin off. It is not the thrilling conclusion to the third trilogy. It had multiple problems in production, including changing directors and editors. Disney has achieved what some may have thought impossible. Despite bringing in stars like Donald Glover, Emilia Clarke and Woody Harrelson, they have made a “Star Wars” film that many people had relatively low expectations for – myself included.

And hey, it surpassed my low expectations! Woo!

To start with, Glover is great in his portrayal of young Lando Calrissian. As much as Mr. Glover has been in the news lately, it is a credit to his performance that I did not spend most of the film thinking, “Look, it’s Donald Glover!” It honestly surprised me when he first spoke how much he reminded me of ol’ Billy Dee Williams. From his costuming to his dialogue and the perfect amount of cockiness he has, this Lando felt like the guy Han runs into in Cloud City so many years later in “Empire Strikes Back.”

I can’t really say the same about Han. Alden Ehrenreich (Air-in-rike) is put in the unfortunate position of trying to be Harrison Ford. Unsurprisingly, he isn’t. I think Ehrenreich does a fine job in the role, though. His comedic timing is there, he has some funny facial expressions and he looks great when he strikes the classic “Han pose” towards the end of the film. Yet, I never felt like this was the guy we met in 1977’s “A New Hope.” I think it just boils down to that certain admirable cockiness Ford brought to roles like Solo and Indiana Jones. There was just something he had that Ehrenreich doesn’t in this film. When I first saw “New Hope,” I relished every moment Han was on screen; this version of the character was not nearly as memorable.

Although, I don’t think all of that Ehrenreich’s fault. Many of this film’s problems, including those relating to Han, come from its over reliance on connecting everything to the original trilogy. Many of the awkward moments come when the film pauses before and/or after Han says some line that he is famous for in the originals (moments like “Trust me…” and “…Chewbacca? You’re gonna need a nickname because I’m not saying that every time”). These constant diversions often sidetrack from the rest of the film. We’re told why Solo is Han’s last name (who cares?), watch Chewy learn to play space chess and watch a certain character light up their lightsaber for absolutely no reason. Any one of these individually could have been okay, but it is when the film repeatedly goes for these groaner references it just becomes a tad much. I get it. I saw the other movie too. Ha freakin’ ha.

There are moments where the film does manage to tie the nostalgia in with the plot, however. I liked the way Han’s “shoot first” mentality is introduced. The “Kessel run” is a set piece moment that works well, as do most of the other set pieces. I thought there are relatively few moments of fake tension and the focus is put on how things happened rather than if so-and-so is going to survive or not. There’s even a heist-like movie sequence towards the end of the film, as things we think we know get constantly switched around.

Overall, though, I can’t say any moment felt memorable. Yet I did enjoy it and I think that is because of where my expectations were set. The actions scenes are fun, the jokes made me laugh – though it’s hard to recall any – and the plot worked but wasn’t groundbreaking.. Hmm, a film that was entertain, but not super memorable…that sounds like an average blockbuster!

I get that the “Star Wars” name carries a lot of weight for some people, and I understand the hope that each edition will be a great film. That’s how I felt about the “Pirates of the Caribbean” franchise, and I slowly died watching four terrible sequels.

Unfortunately, the fact is that “A New Hope” was a force on pop culture that wasn’t matched until “Harry Potter. Something like that is rare and to expect that every time is only going to leave one disappointed. Especially as Disney drives down the one film per year path (for now), these things aren’t going to be once in a decade rarities anymore. Take a breath. Enjoy the increased output, Who knows when it will happen again.

Are all the films great? No. But if they can at least be fun, isn’t that enough?