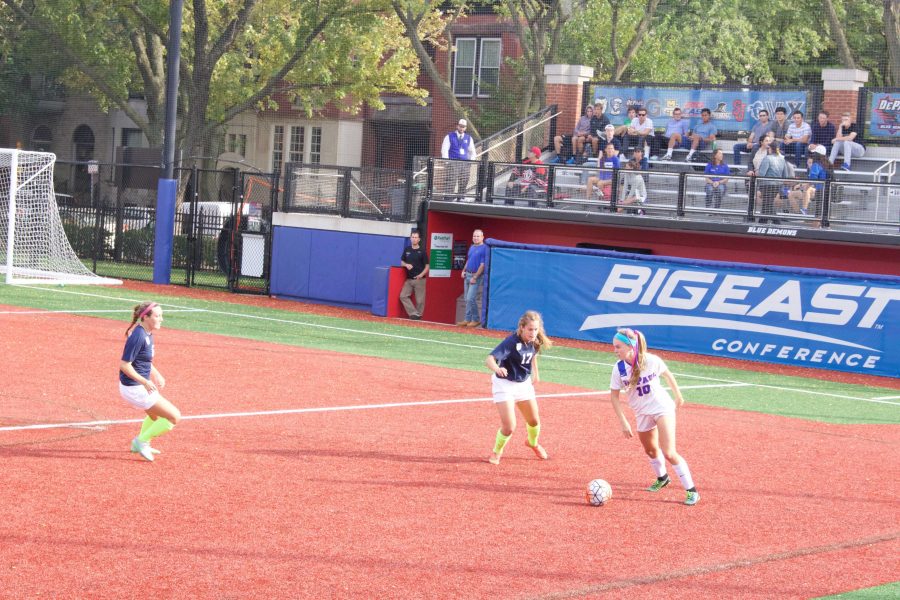 Senior Franny Cerny (right) scored her third goal of the season in the win against Illinois. (Josh Leff / The DePaulia)

As the DePaul women’s soccer team gets ready to open its regular season this week, the preseason awards are coming in.

DePaul senior Franny Cerny was unanimously named to the 2018 Preseason All-Big East Team, as voted on by the Big East women’s soccer coaches.

The announcement came Thursday after Cerny led the Blue Demons last season with 10 goals and 22 points and was tops in shots on the team with 55. Adding to an already good season, Cerny also had four game-winning goals and was voted onto the 2017 All-Big East First Team.

DePaul, who qualified for the Big East Championship for the sixth consecutive year in 2017, were picked to finish fifth in the conference in the preseason coaches’ poll.

Two-time Big East champions Georgetown were once again picked to finish first with nine first place votes after allowing just two goals over nine league contests last season. Just behind Georgetown sat Butler, who was the only other team to receive a first place vote, as well as, Marquette and Providence.

DePaul beat Northwestern in an exhibition game on Friday, but will travel to SMU on Thursday for their season opener before returning to host UMass Lowell and Illinois.