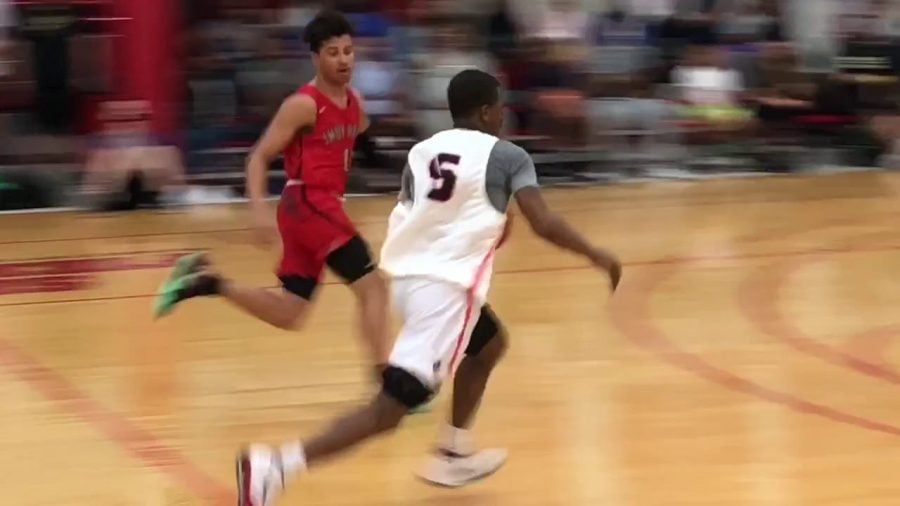 How does a 6-foot-6-inch, hyper-athletic stud who played high school ball in a city famous for its basketball talent slip through the cracks and warrant no high-major Division I offers until after his senior season of basketball concluded?

“I’m not sure,” Lincoln Park High School head basketball coach Pat Gordon said about his former star forward Terrence Shannon Jr. who is the guy who lived the above scenario. “I saw it his sophomore year when he was on the junior varsity team that he was going to be a Division I guy. It was just a matter of time before everybody figured it out.”

There’s a happy ending to the story. Amid an AAU season this spring and summer where Shannon Jr. averaged 14.0 points, 5.7 rebounds, and 2.1 assists with the Mac Irvin Fire, the big-time programs finally began to bite.

First it was the Florida State Seminoles offering him a scholarship on April 30. Wake Forest, Virginia Tech, Illinois, Maryland, Texas A&M, Louisville, and DePaul followed suit with offers of their own after that. DePaul eventually won the sweepstakes for the suddenly hot commodity when Shannon Jr. announced his verbal commitment to the Blue Demons on Sunday via his Twitter account.

He’ll join the Blue Demons in the fall of 2019 after a one-year stop at prestigious preparatory boarding school IMG Academy in Bradenton, Fla.

Shannon’s future plans are no longer a mystery, but the paradox of how this kid wasn’t recruited sooner when he averaged 15 points, 7.5 rebounds, 2.7 assists, and 2.3 blocks per game his senior season at a high school that plays in the notoriously strong Chicago Public League remains one.

The reclassification mentioned above is one important clue. IMG Academy where Shannon Jr. will attend school next year has produced NBA players Dwight Powell, Jonathan Isaac, Anfernee Simons, and Trevon Duval (Duke product who is currently on a two-way contract with the Milwaukee Bucks). If he works hard, stays aggressive, and improves his ball handling and gets his release higher on his jumper (advice from Coach Gordon) he should improve. Plus, he’ll be one year older, more mature being away from home, and more prepared for the collegiate game once he finally enrolls at DePaul in fall of 2019.

But outside of this strategic reclassification, Gordon offers an even simpler explanation for why schools didn’t offer Shannon Jr. until late in the recruiting process.

“It’s easy to overlook somebody that’s right in your backyard,” Gordon said. “Some of the outside programs overlooked him because [they wondered why] nobody in the state offered this kid if he’s that good. He had to let the smoke clear a bit, let the high school season clear and people got to see him more on the AAU circuit and get a different look at him.”

This diluted the pool of suitors as DePaul ultimately won over Shannon Jr. with their consistent and persistent approach to recruiting and their ability to convey to him the family atmosphere of their program.

“I felt like with the other schools they would be good with me or without me,” Shannon told Chicago Sun-Times writer Joe Henricksen in an article written on Sunday. “I felt more needed at DePaul, and I want to help build the program back up.”

Besides the appeal of reclassification and the diluted field of suitors because Illinois and DePaul didn’t set the tone by offering early, the key to figuring out why Shannon Jr. became such a hot commodity late in the recruiting process probably lies in the timing of injuries he sustained last summer and then again over Christmas Break which sidelined him for much of his senior season.

“That was the big reason,” Gordon said.” Those injuries held him back from people seeing him and really getting a look at him.”

Overall in Shannon’s case, the end point is more important than the means to getting to that end point. Per 247Sports.com, Shannon Jr. is now the 90th-ranked prospect in the nation for the class of 2019 and most importantly for the Blue Demon crowd he has given his commitment to DePaul. Coupled with fellow 2019 recruit Romeo Weems (No. 40 in the country per 247Sports.com), the Blue Demons have a formidable, potentially program changing recruiting class to look forward to in a year.

However, nobody will remember when and how Shannon Jr. was recruited if he’s helping the Blue Demons rack up W’s sometime down the line.