DePaul holds on for 2-1 win in final exhibition game 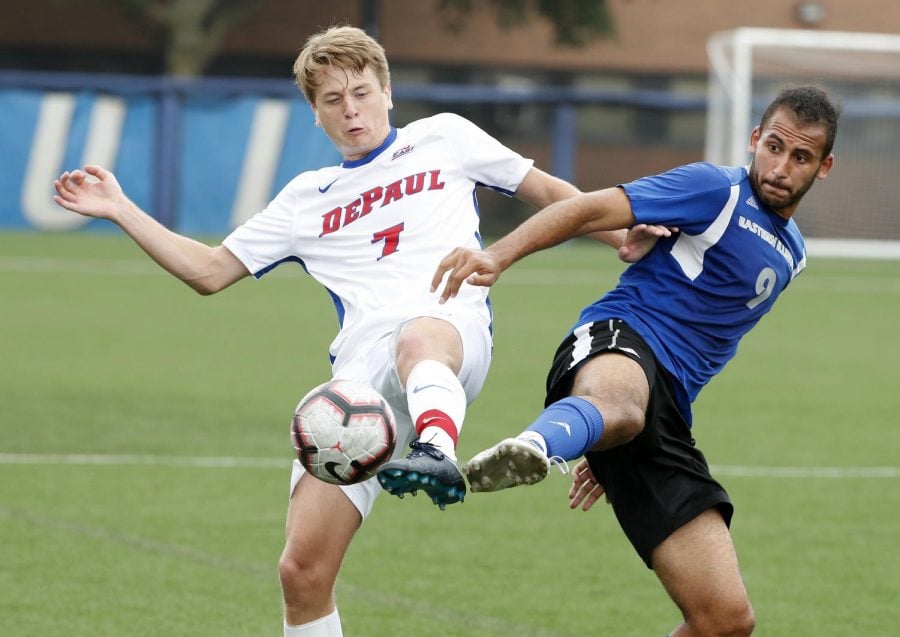 Freshman forward Jake Fuderer recorded his first assist of the season for DePaul after also notching one in an exhibition win over EIU. Photo courtesy of DePaul athletics.

In their 2018 home opener, DePaul men’s soccer held off a late rally from Eastern Illinois to hang on a 2-1 win in their final exhibition game at Wish Field before opening the season at Kentucky.

For the second straight game, DePaul opened the scoring in the 10th minute off a header junior defender Max de Bruijne on a corner kick. The Blue Demons added a second goal midway through the first half with a tap-in goal from Timmy Iscra who finished off a cross from the right corner.

Scoring first has been something sophomore midfielder Timmy Iscra said has been a point of emphasis for the new coaching staff.

Eastern Illinois added some intrigue late with a goal from with just over six minutes remaining and had two opportunities to tie the game on corner kicks with less than two minutes to go. DePaul head coach Mark Plotkin said even though this was just an exhibition game, the competitive juices were still flowing but he was proud of the way his players hung on down the stretch.

“Obviously you want to win every game and the competitor in you and no matter who’s out on the field those are your guys. I still have their backs even though it got a little hairy at the end we gave up the goal late which obviously you don’t want to give up. We’ve been talking about set pieces a lot,” Plotkin said. “I’m proud of the guys for sticking through it and even in the last six minutes to grind out the win. We talk about that a lot, sometimes it doesn’t necessarily matter what it looks like as long as we have one more goal than the other team.”

Over the course of two exhibition matchups against Western and Eastern Illinois, Plotkin was pleased with the jump his team took from game one to game two in terms of their understanding of strategy, discipline and organization as a group. Those are the types of signs he is looking for more so than wins and losses.

“We talk to the guys everyday just about each day we want to improve,” Plotkin said. “I’m not necessarily worried as much about the results just more about what the product looks like. (The exhibition games) just gave us a great chance to give every player who’s healthy an opportunity to play and kind of see what we are working with this year.”

Looking at what has worked the past two games, junior defender Max de Bruijne said the added competition at practice has been a big reason the team has seen some success in the first two games.

“We have a lot of incoming guys that help us during practices which makes us better,” de Bruijne said. “Coaching staff is great and I think our group, how we behave as a family how we want to fight for each other on the field makes us a team and that’s what makes us beat people.”

Among those newcomers, two freshman, midfielder Patrick Watkins and forward Jake Fuderer, were in the starting lineup on Tuesday afternoon. Plotkin has been pleased with how they have adjusted to practice so far and the first two exhibition games.

“I thought they were fantastic,” Plotkin said. “Patrick has been really developing extremely well in training and emerging as one of our most solid defensive guys, he’s extremely coachable and competent on the ball. And Fuderer has been great because he has never played that position ever and he has just taken it in stride and been doing fantastic.”

Tuesday’s win also marked the first home win for Plotkin, albeit it was an exhibition game, he said it still felt good to be back on the sidelines at a place he knows well.

“Feels pretty awesome,” Plotkin said. “It was fun being back out on Wish Field on the sidelines now as a coach so it feels pretty special, it’s awesome to be home and it’s always great to start 1-0 at Wish.”

With the exhibition games in the rearview mirror, the Blue Demons open the season Friday night against the Wildcats. Iscra believes they are ready for that challenge with a few more tweaks.

“I definitely think we’re ready,” Iscra said. “We got a couple more things we are going to go over but we are definitely in a good spot this year to be a good team.”