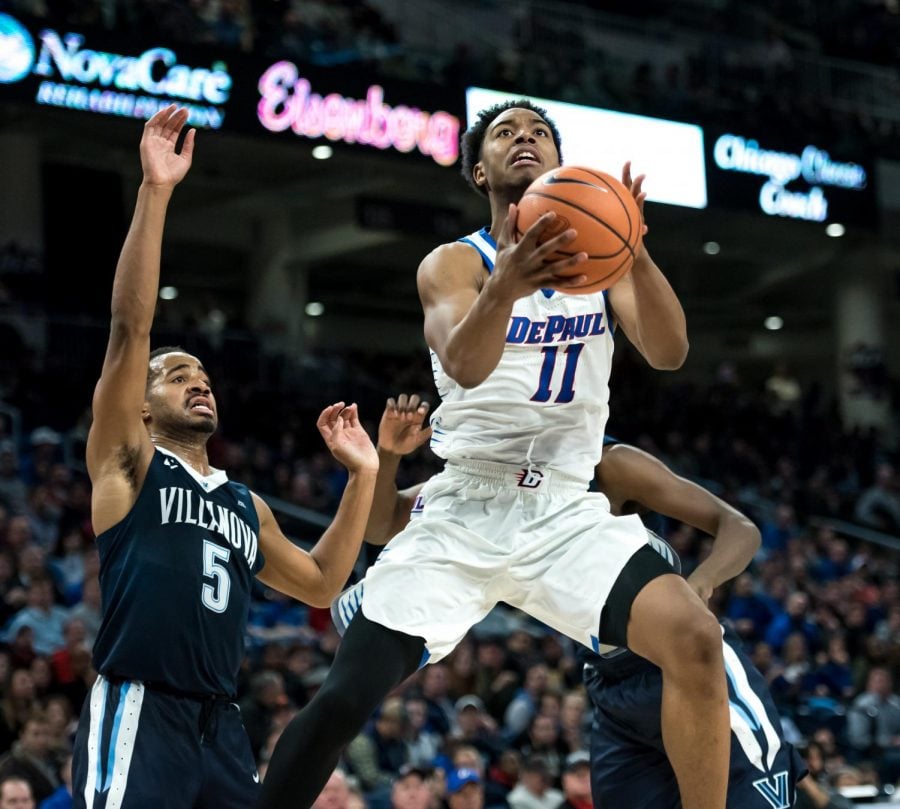 Eli Cain drives to the basket against Villanova. (Konrad Markowski / The DePaulia)

This season, the Blue Demons want to win regardless of whether they are supposed to. They now know what they’ll have to do to make that happen.

The Blue Demons 2018-2019 nonconference schedule will feature nine homes games, two away games, and an exhibition contest against Rockhurst University on Nov. 1.

Here’s the schedule in its entirety:

Here are the top five games that Blue Demon fans can get excited about for next season.
5. Dec. 14 versus University of Illinois at Chicago
With the departures of Tai Odiase (graduation) and Dikembe Dixson (turned pro), the UIC Flames will likely take a step back this year after finishing third in the Horizon League last season.

The game between these inner-city rivals last season screamed Chicago-brand basketball. Defenses dominated (both teams shot below 42 percent from the field), both teams battled through injuries to key players, and since graduated DePaul senior Peter Ryckbosch took charges left and right while Odiase swatted six shot attempts. It was the manifestation of the gritty, blue-collar style of basketball for which Chicago is known.

Regardless of personnel, there’s something perpetually special about college basketball matchups featuring two Chicago teams. In a nonconference slate that’s arguably five deep in terms of games to get excited about, the Blue Demons matchup against UIC easily makes this list.

Welcoming an Atlantic Coastal Conference team into your home arena is always cause for excitement.

It helps that Boston College is kind of good. They went 19-16 last season (7-11 in a tough ACC), and return four of their six leading scorers from last season (granted one of the guys they lose is Jerome Robinson who went 13th overall to the Los Angeles Clippers in the NBA draft this summer).

But for Blue Demon fans, consider this game an early Christmas present. It’s a good measuring stick for the Blue Demons ahead of what should be another grinder of a Big East schedule.

In its three years of existence, the Big East and Big Ten have tied 4-4 each year in these games. The Big East was up 4-3 last year, but DePaul was unable to secure bragging rights for its conference in the final game as they succumbed to Illinois 82-73.

DePaul is still searching for its first Gavitt Tipoff Games victory and hasn’t beaten a current member of the Big Ten Conference since a 2013 win against Northwestern. They can kill both streaks by beating Penn State.

Last season, Notre Dame shimmied into Wintrust Arena and comfortably took care of the Blue Demons after a competitive first half. It was the first-ever regular season game played in Wintrust Arena, and the atmosphere of the game did justice to the magnitude of the moment.

This season, the matchup moves to South Bend, Ind. DePaul is seeking its first signature nonconference win in the Dave Leitao era part two and beating Notre Dame would cross that item off the list.

We all remember what happened last year.

Max Strus’ 33-point performance and the most lively Wintrust Arena crowd to date couldn’t negate the ugly ending. But, the game was a reminder of the specialness of this longstanding rivalry. A rivalry the programs rightfully reincarnated three seasons ago after a four-year hiatus.

Expect more memorable basketball this season as Northwestern looks to defend its turf, win its fourth straight against the Blue Demons, and add an important bullet point to its resume as the Wildcats look to reclaim the title of best college basketball team in the Windy City.