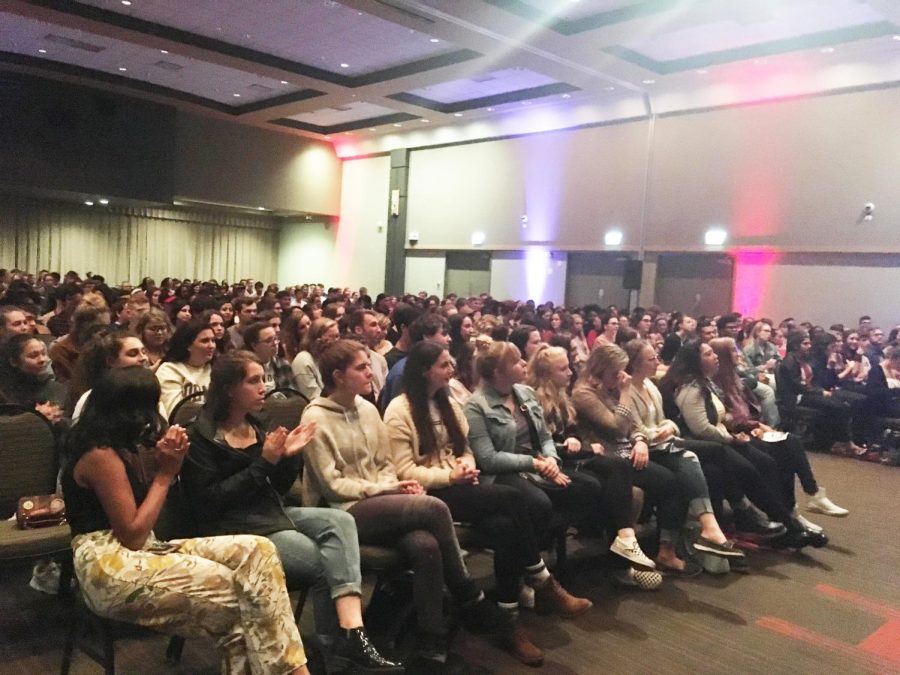 The crowd of DePaul students quicky filled the largest room in the Student Center as showtime approached for The Second City.

Chicago is often called the birthplace of modern improv. On Friday, Sept. 7, DePaul students got an introduction to that facet of the city’s history when The Second City’s National Touring Company took the stage in Lincoln Park.

A line of excited students formed over an hour before show time, stretching through the Student Center. For the first time, instead of students traveling off-campus for the show, the performers came to DePaul. In addition to taking place in a central location on campus, traveling on public transportation in large groups can be difficult at times, especially for those new to the city.

“As a [Resident Advisor] it’s really convenient that it’s here now,” said third-year student and second-year RA Meher Din. “Getting all the residents on the CTA so early in the school year is really difficult.”

The switch may be surprising to students who are used to having to travel to see legendary acts throughout the city. The locale change is due in large part to the new academic relationship between DePaul and Second City. Intended as a way to teach filmmakers the skills and applications of improvisation, the College of Digital Media is now offering a Comedy Filmmaking degree. The only degree like it in the country, it requires that students take classes for credit at DePaul, Cinespace Chicago Film Studios and The Second City Training Center.

Gary Novak, the Director of the School of Cinematic Arts, opened the show by introducing attendees to the new offering. Comedy Filmmaking is also being offered as a minor according to Novak, so all students can “find their funny” without committing to switching majors if they’re already well into their college careers.

In typical Second City fashion, the show was a mix of improv and sketch and sought to highlight the unique strengths of both art forms. The six performers took the stage with the breezy confidence one can expect from such skilled improvisors.

The material ranged in topic from race and gender inequality to the issues with sex education in America, at times getting highly political. Prior to intermission, an auction-like bidding war ensued within the audience over the suggestion for the next scene. In the end an animated crowd gathered over $50 for a scene about Elon Musk and Grimes. After the scene was over, a performer simply stated that “we are going to be donating this money to Black Lives Matter whether you like it or not,” before exiting the stage to raucous applause.

Serving as the finale to the official Welcome Week at DePaul, it easily had the largest crowd of the week’s festivities.

“I’ve been to a few Welcome Week events so far and I’m surprised the turnout is always so low,” said transfer student Holly Ovellette.

For Ovellette, who is originally from Colorado, sketch and improv are an entirely new performance style. Comedy is huge in Denver but “it’s mostly stand-up,” she said.

For many like Ovellette, this was the first introduction to the legendary Chicago institution.

“I feel like it’s a lot of people’s first times so they don’t really know how to embrace it,” said Ovellette after the bidding war took place in the audience.

For others, the group’s reputation precedes them.

Ruhe, a Chinese and political science double-major intends to take some of the Second City offerings here at DePaul. The show represents a nice introduction on what to expect, she said.

After nearly two hours of comedy, the show concluded and students quickly filed out. First-year students Tessera Jiles and David Schonberg left intent on making this Second City show their first of many.

“I knew coming to Chicago that I wanted to see a show at Second City but I didn’t realize DePaul was going to be able to have them come here,” Jiles said. “I expected to laugh because of their reputation, but even then they surpassed that.”