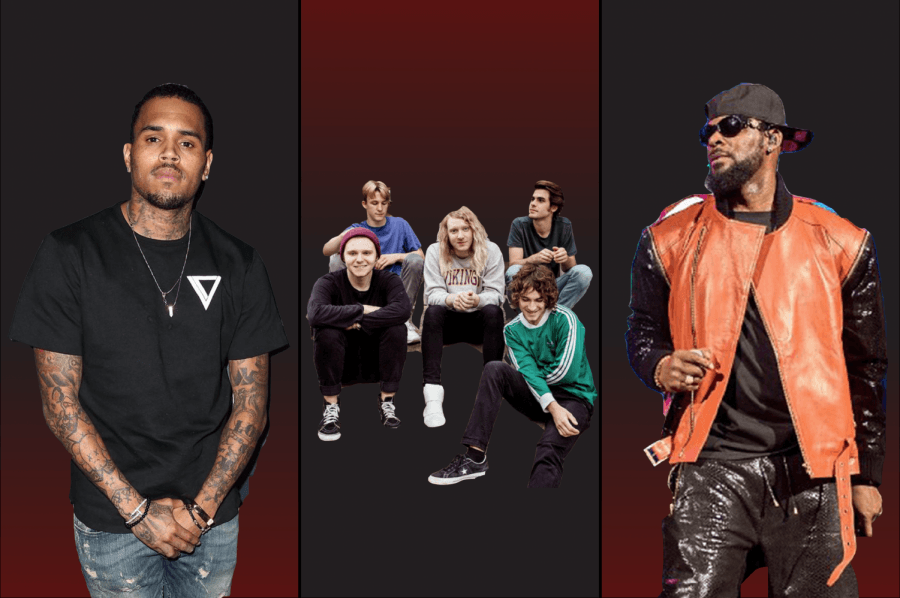 Sex, drugs, rock and roll: The unchecked abuse of the music industry

After a year of national attention on sexual abuse in the film industry, major music artists continue to sustain successful careers even in the wake of allegations of their own.

When the New York Times published their exposé of the crimes of Harvey Weinstein in late 2017, bringing the #MeToo movement into the national spotlight, the idyllic façade of Tinsel Town was tainted by the harsh truths of reality. In the months that followed, with stories emerging that incriminated major players in Hollywood, studios have taken action against the accused. While the careers of many actors, directors and producers have ended in response to public outcry, abusers in the music industry still fly under the radar, just as they have for decades.

Since the boom of the film industry in the 1930s, movies have been viewed as a reflection of culture, while music, after the birth of rock, has been criticized as a deviant alteration of culture. Parents have been concerned about their children’s morality being lost ever since Elvis shook his hips on live television.

However, it’s Hollywood that is feeling the pressure to restructure, while R. Kelly sells out shows and Chris Brown gets featured on “Freaky Friday,” Lil Dicky’s summer hit that has been streamed nearly 300 million times on Spotify since its release in March. Without the accountability that is being forced on Hollywood, the systemic culture of abuse within music continues to fester.

Where is the disconnect between these two entertainment behemoths, and why do musicians seem to be immune to the career ending ramifications of abuse allegations?

“Hollywood is all about the personality. You’re watching people. Music is about the art,” said Deena Weinstein, a sociology professor at DePaul and author of “Rock’n America: A Social and Cultural History.” “We’ve known what happens behind the scenes for years. We just don’t want to admit it, but we’ve decided that if it’s really good music, it’s really good music.”

The separation of art from artist is central to the pervasion of abuse in music. Elvis Presley, John Lennon, Iggy Pop, Steven Tyler, Jimmy Page, James Brown, Michael Jackson, and David Bowie are just some of the long list of music legends with severe allegations against them. All are still idolized.

Some believe the reason for the lack of accountability is the nature of the industry itself. “Music is just so personal. When you connect with a song, you connect with the artist,” said Nina Goodhue, a senior at DePaul. “We romanticize the music and we choose to ignore everything else.”

The sexual nature of the music industry has been widely documented, especially within rock music, but the subsequent abuse lacks clarity. “These rock stars are treated like gods as soon as they start making music. After a while, they start to believe they’re invincible,” said Weinstein. “If God was real, could he handle the fame?”

While major changes are needed to alter the fabric of an industry so ingrained with abuse, small steps are being made. Two weeks ago, the DePaulia published an article about the documents incriminating The Orwells, an up-and-coming rock band from Chicago, that contained allegations of years of sexual abuse. This has led to the band separating. Additionally, emo group Brand New’s front man Jesse Lacey was accused of sexual exploitation last year. He apologized and the band faced some criticism, but is back on tour and will be in Chicago in October.

In May, two women, both young artists trying to make it in the industry, accused producer Noel Fisher, also known as “Detail,” of physical and sexual abuse. In the wake of the allegations, the only legal actions taken against Fisher have been restraining orders between him and the women, further alienating them from the industry they desired to make it in.

While the mainstream culture hasn’t called for much change, some people are taking the moral issue into their own hands.

Jared Gooding has been a DJ since he was 15 years old. He currently works for DJ Chicago, a company active in the Chicago bar scene. Gooding says he has recently removed R. Kelly from his sets.

Kelly is one of the high-profile predators in the industry. Since the 90s, he has been the subject of numerous scandals alleging abuse. In 2017, BuzzFeed’s Jim DeRogatis published a lengthy investigation into the allegations of Kelly operating a sex cult. On October 26, Kelly will be performing at the Celebrity Theatre in Phoenix. The cheapest ticket available is $97.

“I think we’re witnessing the beginning of a movement in music,” said Gooding. He is still hesitant, however, about the traction it can have in the industry. “There’s a more supportive climate right now in Hollywood. But people that speak up in music, they’re blacklisted.”

It’s not only the survivors of abuse who are hesitant to speak out; it’s the journalists as well. Weinstein, who had previously worked as a songwriter, claims that the reporters who know about the systemic abuse within the industry, but are often unwilling to sacrifice their jobs to attack it. “If you get the access, you know what’s happening, but as soon as you write about it, the access is taken away. People don’t want to take that risk.”