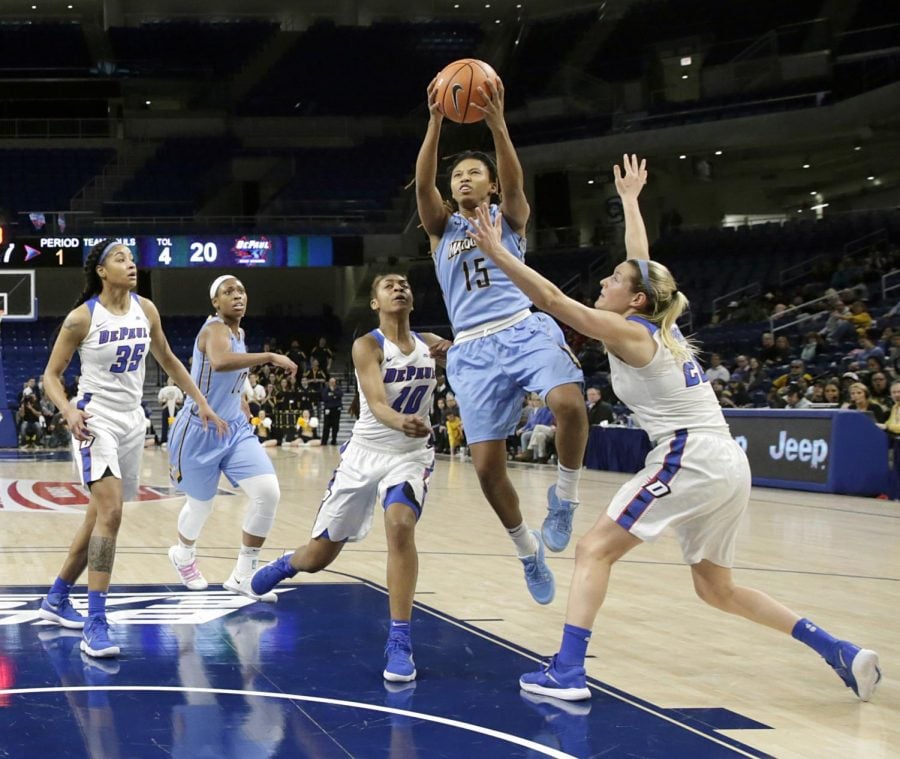 When the DePaul women’s basketball schedule came out last week it was no surprise that the Blue Demons once again have another grueling schedule ahead of them. DePaul will face some of the best teams in college basketball this season, especially in the non-conference slate where they will host defending National Champions Notre Dame and also travel to face Connecticut.

Last season was no different for DePaul in terms schedule strength. They played Oklahoma twice, once in the regular season winning 111-108 in overtime and then again faced the Sooners in the first round of the NCAA Women’s College Basketball tournament, defeating Oklahoma 90-79. “What a tough schedule teaches you is what the level of competition needs to be, in order to be the best team in the country,” head coach Doug Bruno said.

The Blue Demons will begin their regular season on Nov. 9 at McGrath- Phillips Arena against the Green Bay Phoenix. The last home meeting for the Blue Demons took place in 2008, where DePaul defeated Green Bay 76-68. DePaul leads the all-time series, 11-6.

“It will be interesting to see how they will adjust to our three-making inside of their pack-line defense,” said Bruno. “Green Bay is a really difficult opening game. If we can win it, it would be a great RPI win, because of the amount of games they are going to win, and they should win their league.”

Consistency has been the brand of basketball for the Phoenix, winning 20 straight Horizon League conference regular-season titles and eight straight conference-tournament titles.

In just the third game of their non- conference schedule on Nov. 17, DePaul will play Notre Dame at Wintrust Arena. The Blue Demons defeated the No. 7 Notre Dame at home in 2011, but since then the Irish have won the last 10 meeting.

In the Final Four last season, Notre Dame star Arike Ogunbowale hit two game-winners in the semi-final and the National Championship game. After the final, Ogunbowale was named the tournament’s Most Outstanding Player, averaging 20.8 points and 5.4 assists last season. The Fighting Irish return six players from the season prior, and hope to make another deep run in the tournament this season.

“They make you focus on the little details,” said senior guard Ashton Millender. “Whether it’s being strong with the ball or rebounding, since we are small those are important keys for us.”

After the Notre Dame game, the Blue Demons will go through one of its toughest stretches of the season, playing five games in a week, including appearing in the Cancun Challenge from Nov. 22- 24. The Blue Demons will face three challenging games against Princeton, Kansas State and Syracuse. Both Syracuse and Princeton made it to the big dance last season, however, both were one-and- done, losing their first round matchups against teams seeded lower than them. DePaul will come back home on Nov. 26 to face Savannah State before going on the road on Nov. 28 to play Connecticut.

The Huskies are one of the premiere team in women’s college basketball, winning a record 11 Division I National Championships and winning four straight titles from 2013-2016. UConn also holds the record for the longest winning streak in college basketball history winning 111 straight games from Nov. 23, 2014 to March 31, 2017, when Mississippi State hit a buzzer-beater in overtime during the final four.

“Playing them early on and getting the experience under our belt, will help us out through the season to know how to finish games,” senior forward Mart’e Grays said.

DePaul will begin Big East play with two home games against Creighton and Providence on Dec. 29 and 31 before embarking on their first road trip of the season beginning on Jan 4 against Marquette.

Last season these two teams met three times, twice in the regular season and in the Big East tournament final, the Blue Demons lost the first meeting against the Golden Eagles’ but won the final two meetings later in the season.

“Marquette is similar to us, a smaller team that likes to play with pace. It’s always a physical game against them,” Grays said.

The first time DePaul faced Marquette last season the Blue Demons got off to a really slow start, going 5-22 from the field in the first 10 minutes. The Golden Eagles got off to a hot start, grabbing a 10-0 lead before DePaul could even blink, closing out the quarter with a 28-13 lead. Ultimately that slow start cost the Blue Demons a chance to win, as Marquette proved victorious with a final score of 93-81.

“Coach Bruno would say if we are going to shoot fast, we need to rebound and defend well,” Millender said. “They are individually skilled, so when we match up against Marquette we need to do a better job with one-on-one defense.”

The DePaul women’s basketball team will play their final two games at Wintrust Arena when they host Xavier on Feb. 22 and Butler on Feb. 24, where the Blue Demons will honor seniors Rebekah Dahlman, Tanita Allen, as well as, Grays and Millender.

They will conclude the regular season with two road games against Providence on March 1 and against Creighton on March 3. The Blue Demons swept both of those matchups last season.

For the second straight season the Big East tournament will also be held at Wintrust Arena.

Last season DePaul took advantage with the tournament being played in Chicago, and went on to win the tournament over Marquette in the finals 98-63. The Blue Demons dominated the tournament, winning all three games by double-figures against Seton Hall, Georgetown and Marquette.