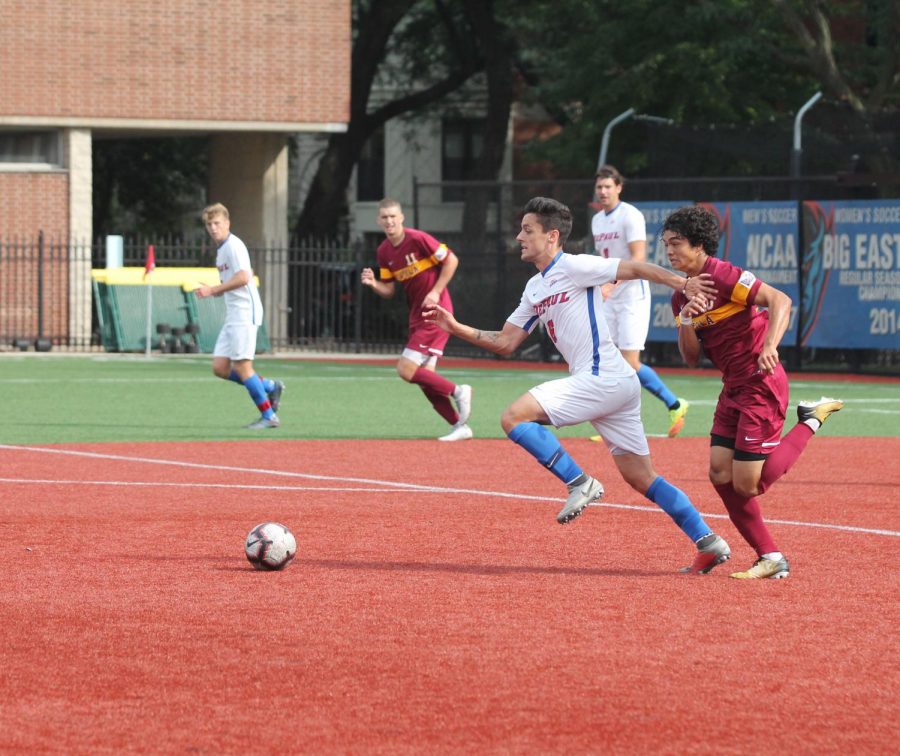 Both Loyola and DePaul struggled to create many goal scoring opportunities in the first half, with the Blue Demons not registering one shot. With both teams visibly frustrated with the lack of chances they created in the first half, the alternative option was to be more physical in the second half. In the second half and overtime alone DePaul and Loyola combined for seven yellow cards.

Ultimately with the game being tied after 90 minutes, the game went into overtime with the golden goal rule in effect. It didn’t take long to find a winner in overtime, where in the 93rd minute Loyola scored the winner off a corner from Fabian Lifka – Grant Stoneman headed past sophomore goalie Drew Nulle.

“Lack of discipline on the last play, it was late in the game and we were a little bit tired, we were turned off a for a second and we got punished for that,” sophomore defender Brayden Callipari said. “It’s unfortunate to lose like that, but we can learn from the mistake.”

In the end, DePaul lost the shots battle 13-4 to Loyola, with their lack of chances to score ultimately costing them in the end. This is the sixth time DePaul has been outshot this season, and in four of those occasions DePaul has gone onto lose the game.

Even though DePaul ended up dropping the game, Nulle shone brightly as he made four key saves in the game. Nulle transferred over from Indiana this season and has fit in perfectly with the Blue Demons. His six- foot-five frame has worked well for him and has helped him make 25 saves this season.

Head Coach Mark Plotkin had nothing but praise and respect for his new goalie.

“All we ever ask him to do is give us a chance to win the game, and he came up with some big saves for us in moments where our defense got broken down and that’s what he’s here to do,” Plotkin said. “Having him in-net gives us a ton of confidence. Just understanding you have a guy behind you – if you do make a mistake – he’s got your back. Drew is a great leader, has a great attitude, great work ethic and challenges the guys in front of him.”

Throughout the season DePaul has struggled to keep its momentum following impressive wins. Coming off the dramatic win over Providence on Friday to kick off Big East play, DePaul was riding high heading into Tuesday, but couldn’t keep that energy going against the Ramblers’.

“After the match against Providence we wanted to find a bit more consistency, there were a lot of great moments that we had [against them] but it wasn’t our best game,” Plotkin said. “Today we tried to focus on putting together a more consistent performance and unfortunately we didn’t do that.”

Tuesday’s loss was the third time DePaul has lost a game coming off a win in the previous game. The longest win streak the team has had this season was winning two games in a row against Loyola Marymount and Drake.

“It’s what we’ve been doing all year, you win a game, you lose a game,” Plotkin said. “I think our guys have shown that we do respond when we’ve put in moments like this when we don’t win. So, we are going to go back to drawing board tomorrow morning and we’ve got an awesome team we are going to play on Friday, Georgetown – one of the best teams in the country, and it’s back to Big East play so I know our guys will be ready for that.”

On Friday DePaul traveled to the nation’s capital to take on Georgetown. For the third time in a week the Blue Demons played in an overtime game; however, for the second game in a row DePaul lost 2-1 in overtime. Nuelle was once again a busy keeper, facing 14 shots on his net and managed to save all but two, Nuelle leads the Big East in saves, 35, after two games into the season.