King of the Court 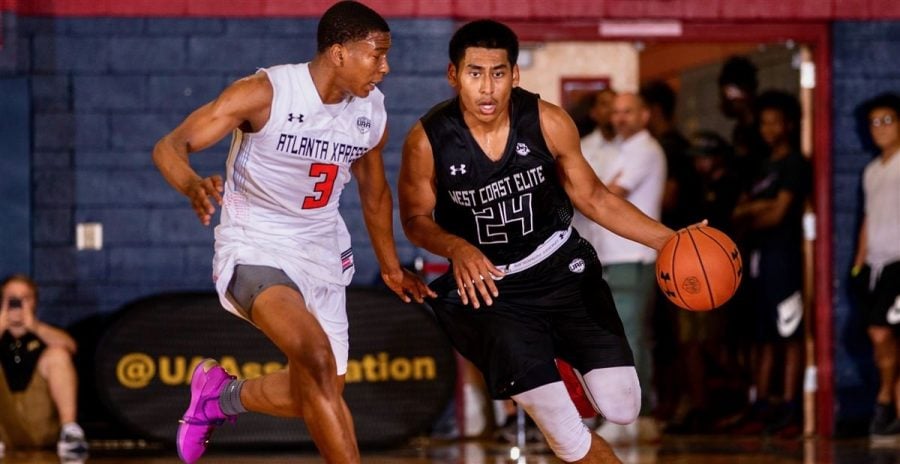 There are lions in Chicago.

Two iconic bronze lions have guarded the entrance of the Art Institute of Chicago for 124 years. Four miles north, real lions prowl about at the Kovler Lion House at Lincoln Park Zoo. But now, there’s another lion in Chicago. Well, not a real lion. Not even a depiction of a lion like the Art Institute statues. Rather, a kid, a basketball player, who is affectionately referred to as “the lion” by coaches and teammates.

“It was a high school game and the director from West Coast Elite Ryan Silver, he came to watch me because he was recruiting me to come play for his team,” Oscar Lopez Jr. said recalling the origin of his nickname. “One game I just had a great game and then after that he came and talked to me and he was like I’m going to give you a nickname. You’re the king of the court, so you’re the lion and he just gave me that nickname.”

What qualities made him the king of the court during that and many other games?

The class of 2019, 6-foot-5-inch wing player gave a verbal commitment to DePaul University and head coach Dave Leitao on Wednesday. The Torrance, Calif. native took an official visit to DePaul on Sept. 21 and has now picked the Blue Demons after fielding offers from Colorado, Georgia Tech, and several other smaller schools.

“When I came on my visit, right when I came I just felt like I was comfortable,” Lopez Jr. said about DePaul. “Like I was home, talking with the coaches and talking with the players. Chicago is a great city, I love the city of Chicago. I went on my visit to Colorado too and just after comparing everything I chose DePaul from there.”

The commitment was a long time coming. After flying under the recruiting radar for his first 2.5 years of high school, the offers finally began pouring in when he joined the West Coast Elite Under Armour AAU program last spring. Coaches from West Coast Elite weren’t available for comment by the deadline of this article.

“They just believed in me, when other AAU teams weren’t looking at me,” Lopez Jr. said. “I didn’t know what I was going to do with AAU because no other teams recruited me or wanted me to play with them. West Coast Elite came along and gave me that opportunity to play with them. Ever since then, I told myself I need to get a scholarship to play basketball and just get my education paid for. Every time I step on the court, I was just thinking about that and I just played hard, played the right way. And then 22 (college) offers came.”

Lopez Jr. currently attends Veritas Prep in Anaheim, Calif. (started this year by his West Coast Elite head coach George Zedan), and previously attended Lynwood High School in Lynwood, Calif. for his freshman and sophomore years of high school and national basketball powerhouse Bishop Montgomery in Torrance, Calif. his junior year (was an All-Conference selection the one year when he was there) before his move to Veritas.

In 11 games with the U17 squad at West Coast Elite, he averaged 9.6 points per game on 57.6 percent shooting from the field (40.9 percent from 3-point land) while grabbing 5.2 rebounds per game and dishing out 2.2 assists.

When he arrives in Lincoln Park next summer, he’ll compete for playing time in what’s becoming a crowded group of Blue Demon perimeter players. His ability to play three positions (point guard, shooting guard, and small forward) could help him stand out.

“Lopez is a 6-foot-5-inch wing-type with very good ball skills, an innate passing ability, and he is as tenacious a competitor as you will find,” PrepHoops.com writer Joel Francisco wrote. “While on the block he knows how to carve out space, can finish with either hand, and he has terrific hands. On the perimeter, he can screen and cut with aplomb, and his perimeter shot has become more dependable.”

Lopez joins highly-touted recruit Romeo Weems in the Blue Demons 2019 recruiting class. On Sunday, former Kansas commit and another top 100 guy in the class of 2019 Markese Jacobs made his decision to stay home in Chicago (he attends Uplift Community High School in Chicago’s Uptown neighborhood) and commit to the Blue Demons. Arkansas transfer Darious Hall rounds out a Blue Demon class of 2019 that is 15th in the nation according to 247Sports.com (third best in the Big East Conference behind Villanova and Xavier).

It’s going to take some work for the lion to become the king of the court in Chicago. But that’s a good “problem” for the Blue Demons to have.