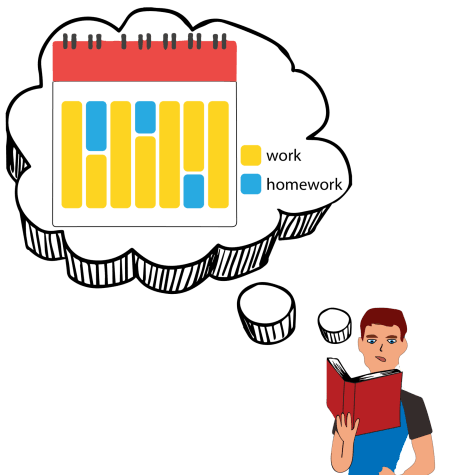 Students are working more now than ever before, and for the first time, according to an HSBC Bank study published last month, students spend more time working than going to class. The study revealed that nearly 85 percent of college students are working while enrolled in school and that many of those students have now prioritized paid work over their school-related responsibilities.

Yet, for many students at DePaul this statistic isn’t shocking or enlightening, it’s actually exactly what you’d expect.

“It wouldn’t surprise me if we were above the national average,” said Karyn McCoy, assistant vice president of DePaul’s Career Center. “It’s just a part of DePaul’s population and the type of students we attract.” In her eight years here, students working consistently while also taking on a full course load and extracurriculars has always been the norm, she said.

The most recent data available, the post-graduation survey of the Class of 2017, reveals that 92 percent of graduates worked at some point while they were in school, including both full and part-time positions.

For many students, working isn’t as much a decision as it is a necessity. Isabella Valdes, a junior public relations major works between 24 and 35 hours each week. She is taking a full course load and is still on track to graduate a year early. As a commuter student, Valdes avoids rent costs and other bills that come with living in the city which allows her to focus on more daunting financial burdens.

“I’ve actually been paying all of the interest in my student loans every month,” Valdes said. “That’s where most of my money goes.”

The strain of student loans is felt across college campuses nationwide and students are increasingly being forced to carry that burden alone.

Robert Kallen serves as the co-director of the master’s program in economics and policy at DePaul. He spent nearly six years studying the student debt crisis up close through a personal connection with President Barack Obama’s former secretary of education Arne Duncan.

Throughout his research, Kallen was able to watch the crisis balloon over time until it finally reached today’s total of nearly $1.5 trillion owed by Americans.

“It used to be in the old days that you could actually work, pay off your tuition and come out of college debt free,” Kallen said. “That’s no longer the case.”

Kallen also noted the serious setbacks that students have post-graduation when it comes to paying off student loans.

“Obviously it’s much easier to create income when you don’t start the game with debt,” he said. Currently, Valdes is determined to limit those setbacks for herself.

“I think I’m a pretty good student so it’s not like my grades have suffered because I’m working, but if I didn’t pay the interest I would have thousands of more dollars to pay back,” Valdes said. “At least I’m getting a head start.”

While obviously not the ideal situation for many students, DePaul has cultivated an environment that encourages and normalizes this lifestyle.

“I feel like at DePaul, a lot of people [work] but a lot of my friends from high school don’t really work, their parents take care of things for them,” Valdes said. “But it’s kind of a different atmosphere at a state school than it is here.”

The work-school balance can be difficult to manage. Students who work often must split their attention and focus causing lower quality work at both their jobs and in the classroom, impacting the ability to meet deadlines as well. Consequently, the value of the education they’re working so hard to afford decreases.

“There has to be a balance. If you’re sacrificing what you’re actually paying for, it doesn’t make sense,” McCoy said. “When you’re paying for something but you’re not giving it the attention and work to help you get the most out of it, then there’s something wrong with that system.”

Still, McCoy says that the skills you develop by doing that as a student can help you for years to come. Often, employers will report back to the Career Center noting the impressive work ethic of DePaul students, making them more valuable employees.

“[Students] are balancing their studies and working and participating in extracurriculars and doing all of these things and it really is pretty amazing,” McCoy said. “It demonstrates the ability to manage their time, their ability to prioritize and a really strong work ethic. On the positive side, it sets students up with things that are important to companies.”

As students combat loans and other costs by working while earning their degree, the next best step may be to market that time as integral to career development, making you a more appealing job candidate.

“Students need to talk about this,” McCoy said. “You look around and see your classmates doing the same thing so you don’t necessarily think it’s something valuable or worthwhile to talk about.”