Midterm election disconnection: College students want to vote but avoidable challenges stand between them and the ballot 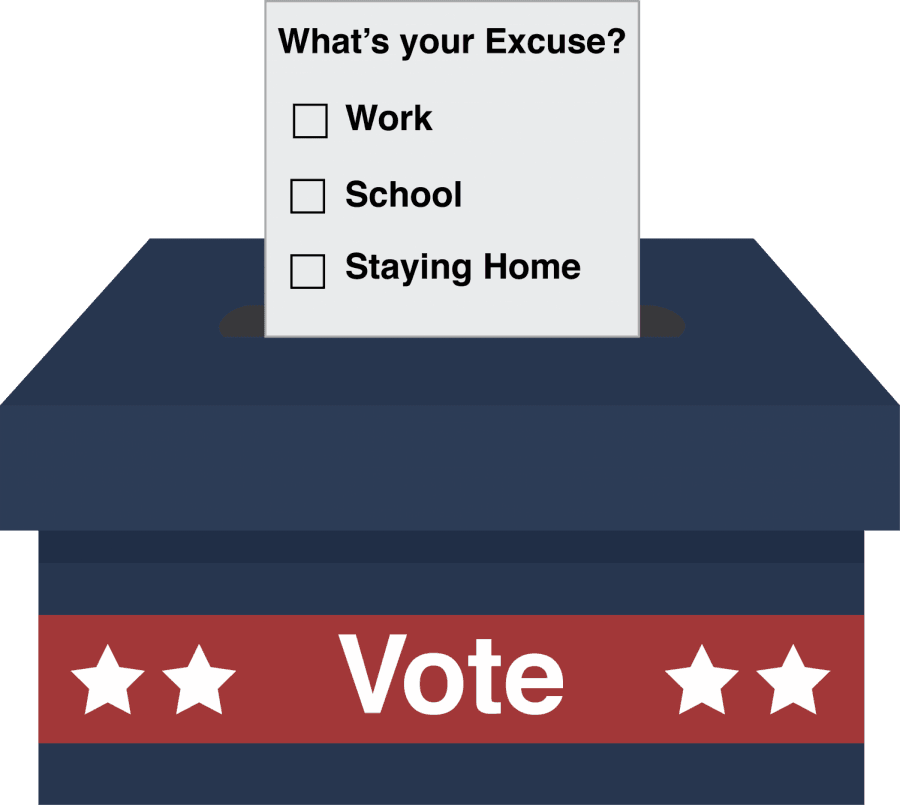 Graphics by Victoria Williamson | The DePaulia

As with any election, low voter turnout plagues the nation because of wasted opportunities. In the 2016 presidential election, 42 percent of registered Americans did not vote, according to data compiled by the U.S. Election Project. The advantage to this is that it could help mobilize those who missed their opportunity two years ago.

Historically, young voters make up a large percentage of missed opportunities. The 2016 election saw some mobilization with young people’s support of Democratic candidate Bernie Sanders, but after he lost the primary, many felt at odds with the system and did not vote in the general election or voted third-party. Others saw the election differently, as some type of burden they could not make the right time for. Work, school and other things got in the way, and the trip to their polling station was not in their game plan. But this is exactly the problem: college students in particular simply do not feel inclined to vote. They cannot risk missing work, school and even sleep when their tight schedules and impending deadlines supersede a trip to their polling station.

While it is easy to allow priorities like work and school fog up your interpretation of voting’s relevance, no matter what is going on in the day, it is uninformed and ignorant to not vote. Even if most students express a desire to vote, a fraction of them follows through because of outside factors like applying for an absentee ballot for out-of-state students.

As with any election, out-of-state college students must apply for an absentee voter ballot in order to vote in their hometown without being there. But this must be done well in advance because, in Illinois, the absentee ballot must be mailed in to and received by officials seven days before the election. This information is all readily available, yet misconceptions about how to vote still persist online.

“I knew I wanted to vote because I have the right to so I don’t know why I wouldn’t,” said Tessa Knox, sophomore. “I had to get my absentee ballot from Wisconsin sent to my apartment, take ten minutes out of my day to fill it out, and send it back to them so I could vote here. It was not difficult, but I can see why people would forget and then regret it.”

In 2018, absentee ballots still have to be mailed in instead of online or in person. As we progress deeper into a technologic future, the way we vote still seems stuck in the paper-based past. Voter turnout might soar if absentees are allowed to register in person for their home state while still in their current state. Some even urge for voting to be welcomed onto the internet and allow voters to cast their votes on their phones, and this would motivate even the laziest voters.

Associate teaching professor in the School of Public Service Nick Kachiroubas thinks it is not that easy. Even if voting could take place online, complications arise because of districts, technology and time.

“Certainly location plays a role in [voter turnout], but there’s a lot of things that have to happen before [online voting] can happen,” Kachiroubas said. “We couldn’t institute an online voting program tomorrow, but it certainly would make the voting process easier. You could say ‘well, [voting] is not easy so I’m not going to do it,’ but then you have to suffer with the consequences of the outcome.”

With about three weeks left until Election Day, it cannot be easy to forget to vote. In Illinois, the Democratic candidate for governor J.B. Pritzker and his campaign videos are literally inescapable. Even if his commercials touting his honesty and good-natured demeanor are easy to see through, it’s impossible to not know of the upcoming election.

“What has happened in the last two years, people are polarized one way or the other,” Kachiroubas said. “They are certainly paying attention. The biggest thing is that it’s easy to post on social media and tell everyone what they should do, and that’s fun and great, but if you don’t make the arrangements to show up at the polls because of an assignment or homework that day, that’s what really what matters.”

Registration deadlines differ from state-to-state, and people will post other state’s information without fact- checking their own. Recently, there were many social media posts regarding the deadline to register in person, and many assumed the entire registration deadline had passed. Some students could have seen this and gave up on voting entirely because of misinformation online. While social media is a beneficial tool to mobilize college students and entice them to vote, much information is miscommunicated and many students will remain uninformed. The duty falls, as it always should, on the student to ensure they are receiving the correct information on voting.

What is not incorrect information is that Illinois polls are open from 6 a.m. to 7 p.m. A full 13-hour day is open for the people to vote. Finding time to vote isn’t difficult. Getting past the apathy might be though.