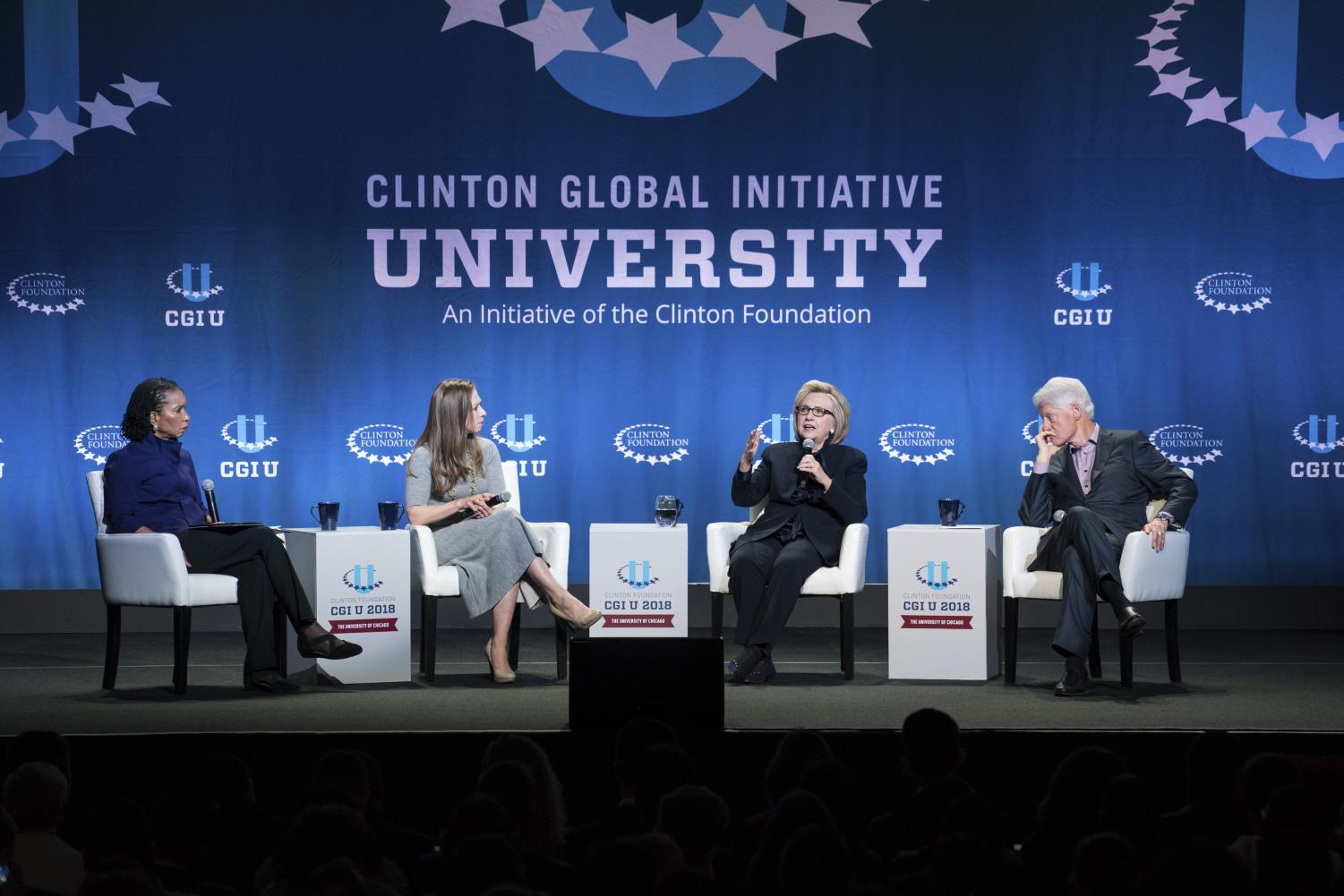 In a packed gymnasium full of students, press, and Americans searching for optimism, the Clinton family gave insight on matters both political and personal.

From Oct. 19 through Oct. 21, The Clinton Foundation hosted the annual Clinton Global Initiative University (CGI U) at the University of Chicago. The meeting addressed relevant global issues, with students, university administration, celebrities and topic experts converging to find solutions to said issues, according to the official CGI U website.

The discussion was moderated by Helene Gayle, the CEO and president of the Chicago Community Trust. The Clintons were asked questions from both Gayle and students attending the event.

A central topic was optimism in the face of strife, with Chelsea Clinton citing the passion of students as a main source of positivity.

“I think there are about 1,100 reasons in this room today to be optimistic,” Clinton said. “I believe that so strongly because of the quality of commitment that all the students have made and their passion and their optimism that is contagious in the best sense.”

Hillary’s answer mirrored that of her daughter, stating that she has a strong belief in the power of individuals to make a change.

“I think we’re living in a time when, unfortunately, there are forces at work that would like to reverse a lot of that progress, and, yet, I don’t think you can undermine the yearning for human freedom and dignity, and therefore I’m optimistic,” Hillary said. “I believe that if we get up everyday with a strong conviction that each of us can play a role in bringing about change…I think we’re unstoppable.”

Clinton said that the best method to combat the issues pressing the world today is to be a force of positive change.

“There’s a battle going on, and it’s good to be an advocate,” the former president said. “There’s a lot of things to be upset about, but the best way to win an argument is to exemplify the change you see.”

When asked about the apparent lack of public faith in democratic institutions, President Clinton emphasized the importance of voting in democratic elections.

“If you live in a democracy, the first and most important thing you can do is to fully participate” President Clinton said. “If you don’t vote because you think it doesn’t make any difference, you help to ensure that it doesn’t make any difference. Except it does. You make it more likely that everything you don’t like about today will happen tomorrow, but with greater force.”

Secretary Clinton followed, stating that the lack of trust in public institutions can often be exploited by those looking for power.

“The decreasing trust and belief in institutions is often warranted. There’s grounds for disappointment, for disapproval about what is happening,” Secretary Clinton said. “It’s also a scare tactic for those who want to undermine faith and basic institutions and cut societies loose from any connection with or respect for the institutions that are operating within that society.”

The Clintons, while boasting a career longevity most politicians can only dream of, are a highly polarizing political dynasty. President Clinton was the subject of a national scandal when, in 1998, he was found to have had an affair with a 22-year-old White House intern Monica Lewinsky.

Hillary was also the subject of scrutiny during her 2016 presidential campaign when it was discovered that she had used her personal email for official communication when she served as secretary of state, rather than the official State Department server.

“When a politician has dealt with controversy that questions the politician’s honesty and integrity, that negative view on their values makes citizens questions where else has that politician not been forthright with values, information, and decisions that impact society,” said Ashray Reddy, a founding member of MeaningFull Meals, a Chicago-based nonprofit. “Honesty and credibility takes only a few incidents to erode and take a long time to repair.”

The Clinton family hold a complicated legacy as it pertains to the #MeToo movement, with President Clinton’s aforementioned affair considered by many to be an act of sexual misconduct. Secretary Clinton further strained this issue in a recent interview with CBS’ Sunday Morning, in which she stated the Lewinsky affair was not an abuse of power on President Clinton’s part, due to Lewinsky being an adult at the time of the affair.

Secretary Clinton’s statement has been met with widespread backlash, with #MeToo founder Tarana Burke deeming Clinton’s remarks “tragic and wrong.” Despite the decades of controversy following their careers, the Clintons have made it clear that they are here to stay, and hope to to inspire a new generation.

“The most important thing to remember is that, if you’re breathing, you can change tomorrow,” President Clinton said. “As long as you believe that the interdepence of the world requires of to choose diverse, group cooperation, instead of homogeneous, tribal separatists.”