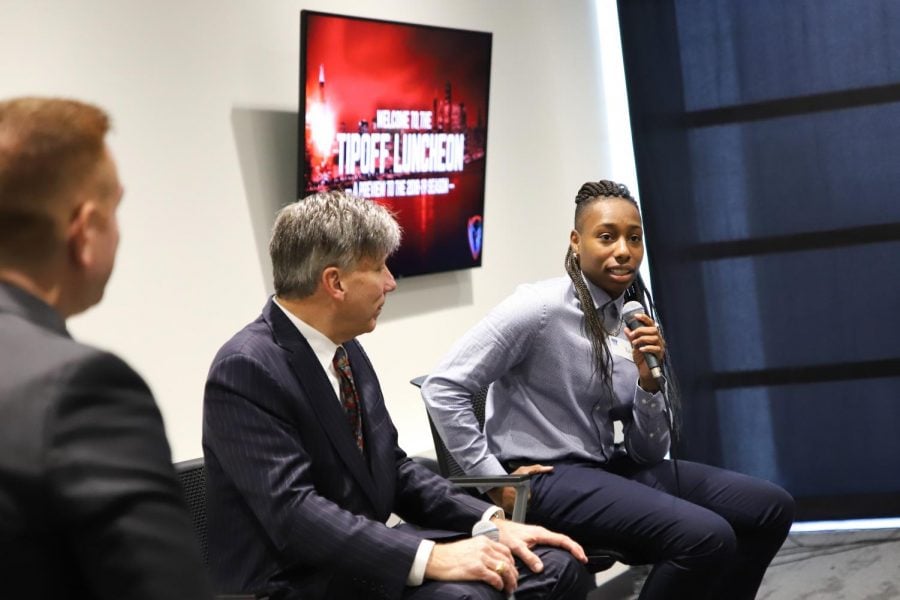 After appearing in their 16th straight NCAA Tournament and winning the third most games in school history, the goals are once again incredibly high for DePaul Women’s Basketball.

“Our goal this year is to make history, so it’s really big for us,” Campbell said. “Our women’s basketball team has never won 30 games before, so we would love to win 30 games and then make it past the Sweet 16 – so that would be our first step.”

While a tough non-conference schedule awaits with games against UW-Green Bay and Notre Dame early in the season followed by several tough matchups, Coach Doug Bruno knows the challenge will be steep beginning with their first game.

“If we can figure out how to pay attention to details between now today, Oct. 16 at this magnificent event and Nov. 9 when we open up one of the most rigorous schedules in our program history, against a 27 to 30 win Green Bay team,” Bruno said. “Then one week later we got No. 1 Notre Dame right here in Wintrust followed by the likes of UConn’s of the world, Syracuse ranked, Oklahoma ranked, a murderous schedule…”

Attention to details is going to be a key talking point for Bruno and his staff this year if they want to achieve the lofty goals like winning 30 games or advancing deep in the tournament.

Bruno cited a story from Monday night where his assistant coaches let the players know the attire for the luncheon was business casual, so no gym shoes or yoga pants. When three players showed up in gym shoes and yoga pants, Bruno said these are the types of things he’s preaching about.

“I think we have a chance to be pretty good but we have to pay attention to details,” Bruno said. “That includes figuring out what to wear when your coaches tell you what to wear.”

There’s a reason for this too, Bruno admitted his team was a Sweet-16-caliber team a year ago that won 27 games and blew out Marquette by 36 points in the Big East Tournament Championship. They did not actually reach the Sweet 16, however, and Bruno pointed to their matchup against Texas A&M in the round of 32 where they blew a 17 point lead as one of the reasons paying attention to detail is such a point of emphasis.

“Having them down, this team did a lot last year,” Bruno said. “At the same time we went down to a higher seed’s home gym and had them beat and didn’t finish the job because of details, and that’s why I’m on my tangent about details. You want to win in March, you have to be ready to win in November and December and you have to pay attention to details.”

The players are aware of the challenges that face them beginning Nov. 7 against UW-Green Bay, but Allen has praised the leadership of the team and the mindset of the freshman as well.

“One thing about this team we all have the same mindset and it’s not just about what Kelly said those are our goals,” Allen said. “We want to make history, we want to go further than any other team have gone before, we want a home seed, we want all these things but we know that it is going to take work but we’re willing to put in the work and I’m really excited about what we can bring this year.”