In a cozy California-style set, actress Busy Philipps takes on an entirely new role as host of her own show on E!, “Busy Tonight.” Philipps attempts to stand apart from her fellow late-night hosts by straying away from topical discussions and instead creating relaxed and informal interviews with her guests.

Instead of focusing on Trump, politics or any of the other topics that seem to dominate discourse today, Philipps essentially presents the exact opposite: a show that’s about nothing in particular. Instead, she attempts to create a show that ends the day on a high note, an increasingly rare characteristic in today’s media. Perhaps setting her apart the most, though, is that each episode ends with Philipps in a nightgown singing a lullaby to her audience. An interesting production decision, to say the least.

Most importantly, “Busy Tonight” attempts to break up the repetition that plagues late-night talk shows. While far from perfect, the show at least attempts to bring something new to the table. If you’ve grown tired of tuning into a white man in a suit and tie to make you laugh before bed, “BusyTonight” might just be the show you’re looking for. 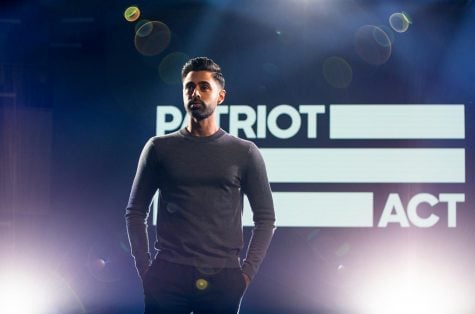 Joining the already crowded late-night landscape on Netflix, Hasan Minhaj attempts to carve out his own spot when it comes to politically relevant comedy today. Fresh off a very successful run as a “Daily Show” correspondent and his hugely successful stand up special “Homecoming King,” Minhaj combines the two things he’s known for into one show. That’s where “Patriot Act” comes in.

Minhaj’s candor and humility make him stand out amongst his peers. “Homecoming King” was deeply personal and was performed in a more informal manner, different from the traditional “one man, one microphone” stand up performance style. This continues with the “Patriot Act,” placing Minhaj in his on-stage comfort zone immediately. Minhaj is also considerably younger than his late-night peers, infusing his show with a youthfulness and energy that is hard for his counterparts to match.

Netflix has struggled to find a foothold in the late-night arena with failed shows over the last few years coming from Chelsea Handler, Joel McHale and Michelle Wolf. Perhaps Netflix has finally found a host in Minhaj that fits into the perfect late-night show equation.