The onus is on DePaul to attract fans 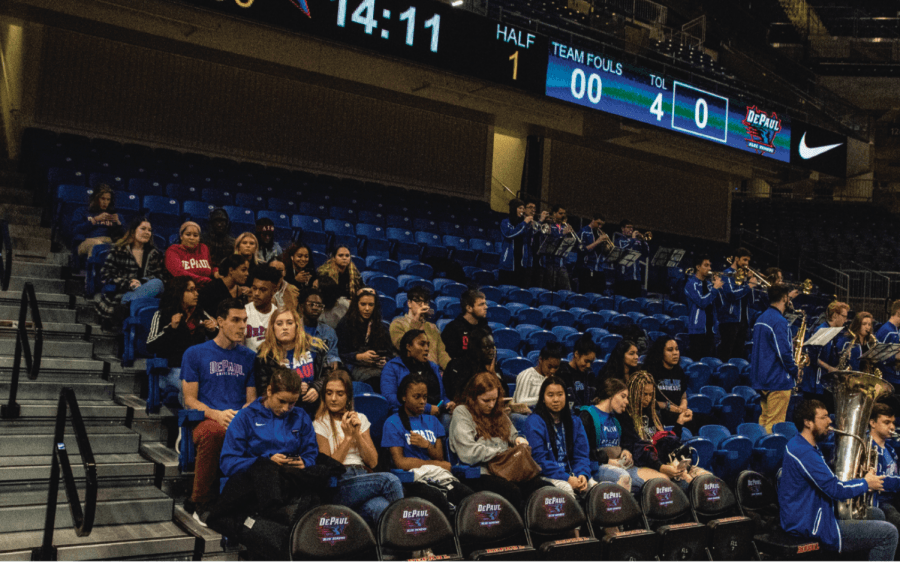 Last spring, basketball fever infected the North Side of Chicago. A city-dwelling team was catapulted into the national limelight during their miraculous March Madness run, Lincoln Park bars were packed with college-aged students cheering on the underdogs. The men of DePaul’s basketball team joined them as it was the Ramblers of Loyola University that caught the city by storm while the Blue Demons missed the tournament for the 13th straight year.

Sports have a beautiful way of uniting communities, and with the onslaught of negative press surrounding DePaul in recent years, a return to success by the former powerhouse of a program could be just what the student body needs to be proud of the Blue Demons once again.

Marty Murphy, who works for DePaul as the Associate Athletics Director of Ticket Sales and Operations, graduated from DePaul in 2006. His affinity for Blue Demon basketball, which he speaks about with unparalleled passion, started during his undergraduate experience back when the program was thriving. Now, Murphy has the challenging job of encouraging a community to care about a perennial disappointment.

“The pressure was there to get as many people to come to games as possible and to make the ticket revenue numbers that we needed to do and the team needed to turn around and started getting more W’s,” Murphy said.

In an unscientific survey of 100 students conducted by the DePaulia, 85 percent of students reported that the basketball program played no factor in attending the university and 65 percent stated they don’t care about Blue Demon basketball. For a storied program, and one of the most successful in history, it’s time to get back on track. The school needs it. The students deserve it.

The team’s first season at Wintrust Arena drastically underperformed in terms of attendance projections. To be fair, there were increases from the record low average attendance during the Allstate Arena’s final season hosting the team.

“I’m not gonna lie, we’re not where we need to be. We need to keep growing that trend, but it’s a good start,” Murphy said. “As the empty arena hemorrhaged money last season, school spirit wasn’t the athletic department’s biggest concern, but maybe it should have been.”

Ally Hursh, a junior at DePaul, has been on the dance team for three years and performs at all the home basketball games.

She believes higher attendance could contribute to better performance by the team.

“When a lot of people go to the games, it’s exciting,” Hursh said. “The team likes to have that hype and support and I definitely think they would play better.”

Apart from paid individuals in the athletic department, some students have taken on the responsibility to cultivate some school spirit, and they do it for free. Michala Leber is the president of Blue Crew, DePaul’s fan organization whose mission is to spread school spirit and pack games as much as possible.

“I would definitely say that having a strong basketball team increases student mood. We have some cool tricks up our sleeves to get people to games this year,” Leber said.

While she stated that she couldn’t share exactly what those tricks were, she did admit that execution has been an issue in the past. She is making it her mission to ensure they are all enacted this year.

“It’s my job to get people to games and overall, spread school affinity,” Leber said. “I know it’s out there.”

The hope is that if/when the team starts winning constantly again then that will translate to more students to come to games and support the Blue Demons.

“The history and tradition of DePaul men’s basketball is so big that you have people all across the country that remember Ray Meyer and Mark Aguirre and Dave Corzine,” Murphy said. “We get the men’s program back to where they want to be, it could be a very big sense of pride for the university. Students waiting in line for student section tickets, that’s my dream.”

After the $82.5 million move from Allstate Arena to Wintrust last year and the arrival of a slew of new talent, many are saying that this could finally be the year for the program to get back on track. This sentiment was reiterated by Murphy, Hursh and Leber. Preseason optimism has become a DePaul basketball trademark, but consistently poor play has left the fan base and student body dissatisfied year after year. There is no point in predicting how the team will perform anymore. Results are what is needed to prove to the students that they have something to be proud of and something to unite them.