The focus in midterm elections is often on national trends, and congressional and state races. But way down the ballot are elect- ed officials who have a surprising amount of power, but who few voters actually vote for.

If you are pulling a ballot in Lincoln Park, for example, there are 59 judges up for election, ranging from seats on the Illinois Supreme Court to bankruptcy judges. Un- like federal judges who are nominated by the president and confirmed by the Senate, judges in Illinois are elected by voters. This means that if you don’t like a judge’s politics or you think they do a bad job, you can vote to fire them. But this rarely happens. Voters haven’t removed a sitting judge since 1990, according to the Chicago Tribune.

“I usually just skip over the judges,” said voter Jackie Reese as he just left early voting in Hodgkins, Illinois. “I know it’s not good, but I don’t know enough about any of them to justify voting for them. (…) I wonder how many people actually vote for them.”

Judicial candidates don’t create laws or regularly seek media attention like other politicians do. But the way judges vote has far-reaching impacts. Are you concerned about mass incarceration? Check to see which judges hand down harsh sentences for petty crimes, and which ones lean toward probation. Worried about gentrification in your neighborhood? Check a judge’s record on zoning matters.

Luckily, legal groups and state and local bar associations do all the dirty work for vot- ers. For sitting judges, they will sit in on their courtrooms for a few days to observe how they carry themselves. They interview all the judges up for election and review their past rulings. The input of lawyers who have argued cases in front of the judges is also taken into consideration.

There is a local bar association for almost every demographic; there’s one for black women, one for Puerto Ricans and lesbian and gay bar association, all serving just Chi- cagoland. You can see all of their ratings at voteforjudges.org.

“Before elections come up I read the voting guides in the Sun-Times,” said voter Mary March, 86. “If I ever go before a judge, I want to know they’re a good one!”

Illinois is also one of 38 states who votes for state Supreme Court judges for their 10- year terms. Only one Supreme Court justice is up for reelection this year: Anne M. Burke, the wife of powerful alderman Ed Burke.

None of the state bar associations responded to The DePaulia.
The unqualified judges
Shannon O’Malley

Affter he lost a 2010 judicial election in Will County, Phillip Spiwak needed to find a new way to win. So he legally changed his name to Shannon P. O’Malley for his upcoming battle in the reliably-Republican 13th Sub-Circuit Court election.

“The advantage of an Irish-sounding name in Cook County has long been accepted as gospel truth,” wrote researcher Albert J. Klumpp in a 2011 study for the DePaul Law Review.

Judicial elections of Cook County past have tended to favor female candidates more than males. Having both an Irish and female-sounding carries a 24.7 percent advantage, a much greater advantage than political affiliation, according to the study.

So Spiwak, seeking an edge over his male competition, decided to dump his Polish surname and mascu- line-sounding given name for one more pleasing to Chicago voters’ instincts, and dubbed himself Shannon P. O’Malley. 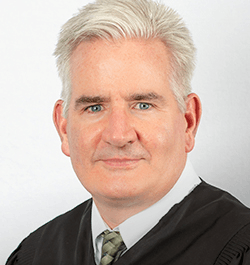 Matthew Coghlan first found his behind on a bench in 2000. But it is what happened in 1993, when he was still a prosecutor that earned him the lowest overall approval rate of any judge up for reelection this year.

Coghlan was a gang prosecutor at the time. A lawsuit filed by two men who were exonerated after 23 years in prison allege Coghlan stood idly by as a detective convinced an informant to falsely accuse them of the crime.

Injustice Watch also found that the cops who find themselves on the wrong side of the law tend to get off easy in Coghlan’s courtroom. One Chicago police officer had hit and killed a 13-year-old boy on a bike while he was drunk and fled the scene. Coghlan gave him only three years.

But if you’re a black man before Coghlan’s bench for marijuana possession, it wouldn’t be unlikely if you got one year in jail.

Now, even his own party is dumping him. Jacob Kaplan, the executive director of the Cook County Democrats, told the Chicago Tribune that this was the first time the party has recommended to vote “no” on a member of their party in the last 40 years.

Maura Slattery Boyle is one of only six criminal judges seeking retention this year.

Injustice Watch, a nonprofit journalism organization that exposes wrongdoing in the courts, analyzed Slattery Boyle’s case history and found that of the 23 criminal judges in Cook County, she regularly issues the harshest sentences.

34 of her decisions have been reversed by a higher court, nearly three times more than Matthew Coghlan, who had the second most amount with 12.