The nation has been in recovery this past week a er a violent shooting at Tree of Life Synagogue/Or L’Simcha, in Pittsburgh that left 11 dead. While so many are left shaken and disturbed by this tragedy, this act was not uncalled for. So much of the political rhetoric of our time is laced with blatant anti-Semitic language, thus “condoning” heartbreaking acts such as this.

“It’s no secret that throughout its history America has had its share of issues with racism and discrimination against minority groups,” said Jamaal L. Craig, the Executive Director of the Pennsylvania Interfaith Impact Network (PIIN). “We cannot ignore the anti- Semitic and racist rhetoric dog whistling that is out there.”

As a member of the Pittsburgh community, Craig has noticed the tension that has set throughout the city after the shooting. 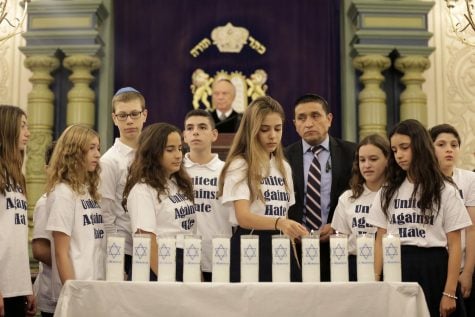 “There is not a place you can go where people are not in disbelief about the trajectory incident that took place.”

Yet, Craig said that this event, no matter how devastating, has brought Pittsburgh natives together in support for those affected. Within the Jewish community, Craig has noted the immense strength that has come from this loss.

“I would say that the tragic event has caused people to draw closer together in our faith,” Craig said. “The principles of compassion, love, justice, and peace are certainly on display throughout the faith community.”

The hateful speech from nationalist groups are what motivated Robert D. Bowers, 46, to open re in the synagogue with an AR-15-style rifle, taking the lives of those peacefully practicing their faith. According to police, Bowers shot indiscriminately into the crowd of worshippers, shouting “kill Jews”.

“I’ve always been worried about something like that happening but I still wasn’t ready for the news,” said Michael Adato, DePaul Hillel President, about the shooting. “I was also angry because the fact is that Jewish people shouldn’t have to deal with these sorts of things on a semi-regular basis.” 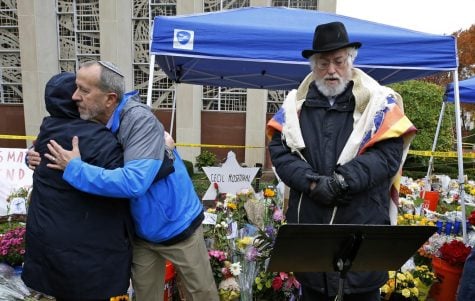 “The Jewish community at DePaul felt a collective outpouring of sadness over the few days afterwards. We rallied together and made sure that we had student leaders and staff and Jewish leaders from around the community come to our DePaul Jewish Life room throughout the week.”

Since the shooting it has been reported that Bowers was compelled by the false notion that Jewish people were helping to bring refugees into the U.S. Similar insightful messages have come from Trump’s Twitter account, ranging from caravans filled with gang members to dismissing the actions of nationalist protesters in Charlottesville.

Similarly, some of the few comments Trump tweeted a er visiting Pittsburgh in loo of the shooting where about the kindness of the city, the “small” size of the protests and a show of support for Republican Representative Keith Rothfus who is running for reelection on Nov. 6.

Those in Squirrel Hill have not been impressed with the actions of Trump’s response to this and other shootings. Rabbi Jeffrey Myers reportedly blames Trump’s speech for empowering people who, like Bowers, continue to commit devastating crimes out of hate.

Wecannot ignore the anti- Semitic and racist rhetoric dog whistling that is out there.”

While the shooting has been devastating for so many across the nation, it has become a reason to unite against hatred. Globally, the hashtag #ShowUpForShabbat was used around the world to condemn the violent act and show solidarity with the members of Tree of Life Synagogue. In the U.S., two prominent Muslim groups, CelebrateMercy and MPower Change, were able to raise over $200,000 to help victims and their families a er the shooting. 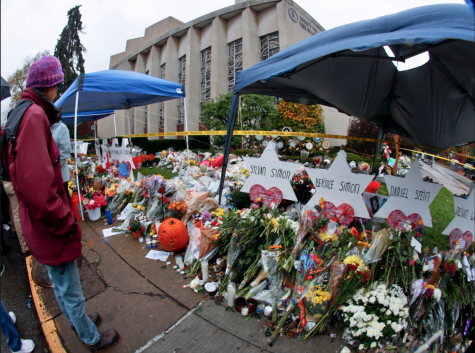 Keith Srakocic | AP
This photo made with a sheye lens shows people standing beside hundreds of bouquets of owers stacked in front of the memorials for victims of the deadly shooting a week ago at the Tree of Life Synagogue after an outdoor service on Saturday,Nov. 3, 2018, in Pittsburgh. Eleven people were killed and six others injured in a shooting during services last Saturday.

Despite the divisive language that is being used in today’s political scene, the communities that have come together out of love has proven to be more powerful. For Adato, these actions have helped him cope with the tragedy.

“The biggest help to me has been the response in the non Jewish community here. DePaul Muslim and Christian Life showed up to support us and it means a lot.”