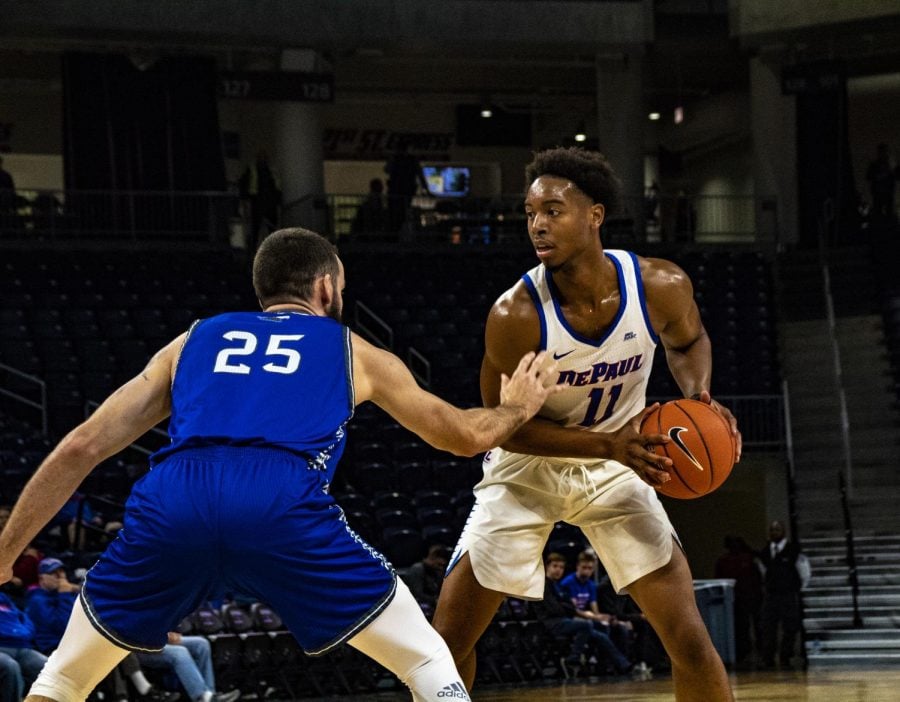 The wait has been long and forgettable for DePaul fans who have been longing to witness a winning season since 2007.

Once again the Blue Demons enter a pivotal season with head coach Dave Leitao moving into his fourth year back with the program, accompanied by a trio of talented seniors in Eli Cain, Max Strus and Femi Olujobi.

While there are only five play- ers still on the roster who played meaningful minutes last season, the additions of Jalen Coleman- Lands and Lyrik Shreiner, and others, the roster is deeper than previous years.

“[We have]a few older guys that have been around college bas- ketball for a long time,” Leitao said. “We’ve added some pieces whether they were redshirts, or things of that nature, that allows you to be a lot more optimistic than we have been.”

That’s great, but with a coach in his fourth year and two elite scorers entering their final season, 2018 should be a make-or-break season for the program. With a winning season, everything Leitao and DePaul Athletic Director Jean Lenti Ponsetto have preached could come to fruition with improved attendance, recruiting and the opportunity for DePaul to build on the foundation set in 2018. However, another season at the bottom of the Big East stand- ings will make it next to impossible for Lenti Ponsetto to justify Leitao’s place on the sidelines in 2019 — or her own.

Positive reports have emerged about the mindset DePaul players during practice, with Cain ac- knowledging there has been a new focus and attention to detail not present in previous years.

“I think talent has been through this program for previous years but the mindset wasn’t there,” Cain said. “I think the mindset of the guys we have now and the staff that we have now is really going to push us and this culture forward.”

Talent has come through the program before in the form of Myke Henry, Tre’Darius Mc- Callum, Marin Maric and Billy Garrett, all of whom have played professionally after DePaul, with Henry being the only one to find himself on an NBA roster.

As talent has rolled through the program, however, so have the losses. The narrative began to shift, however, with five-star commit Romeo Weems potentially signing with the school later this month, the Blue Demons need to establish a culture of winning with not much of a veteran presence waiting in the wings.

The players are well aware of where DePaul has been the past decade, namely their nightmarish experience in the Big East where they’ve amassed a 31-167 record in the conference since their last win- ning season in 2007. That is also their only winning season since making the jump from Confer- ence-USA.

“Our main goal is to win and win as much as possible,” Strus said. “Everybody on our team has their mind focused on that.”

Strus added nobody on the team is focused on themselves, which is a key source of the optimism.

As a whole DePaul has all the talent they need to compete in the Big East especially with Xavier losing head coach Chris Mack to Louisville and senior leader J.P Macura while Villanova is reloading after saying goodbye to a historic senior class led by Kris Jenkins and Jalen DePaul senior Eli Cain squares off against Rockhurst defender Auston Rushing. Brunson.

Not that players weren’t expecting it, but DePaul received a harsh reminder at Big East Media Day that their perception is still not where it needs to be. Not that pre-season rankings are the be-all and end-all of a season, but it certainly isn’t the best way to start.

“Coach has been on us the whole preseason about having a sense of urgency,” Strus said. “No- body is going to give us anything —we’ve been ranked 10th in the Big East already, nobody respects [us] so we don’t really have time to not have a sense of urgency.”

With the senior leadership of Cain and Strus, DePaul has a great opportunity to take advantage of the experiences they have been through.

Leitao admitted the team, while filled with players who have experience, have not played in this system or on this stage, which is where they need to rely on Strus and Cain to step forward.

“I said this early on that we’re not and won’t be where we need to be until we continue to grow that way so it is still going to take us a little bit of time,” Leitao said.

Things have been rocky at best for DePaul this offseason and leading into the year. The DePaulia reported last year that the NCAA was investigating DePaul, however details are still unknown. Two assistant coaches Shane Heirman and Tim Anderson were also accused of paying former five-star recruit Brian Bowen II prior to being hired at DePaul during the recent trial of Christian Dawkins, James Gatto and Merl Code in the NCAA corruption scandal.

Despite some of this turmoil that has surrounded the program, DePaul still possesses a tremendous opportunity to be part of a turnaround that Cain admitted would mean the world to the play- ers to be a part of that turnaround.

“I think we have a really good chance to make it happen but I think we just have to seize the moment and live day by day,” Cain said. “It’s not going to be easy there are going to be bumps in the road just like it was previously, we’re going to take our hits but this is the team that can change the program for years to come.”

After close to decade of wait- ing, DePaul has the opportunity to begin a new chapter — one they hoped would begin a year ago with the unveiling of Wintrust Arena, one reminiscent of the Ray Meyer era when the Blue Demons were perennial contenders and not basement dwellers.

If that chapter doesn’t begin this year, it may have to happen with a new coach and athletic director.