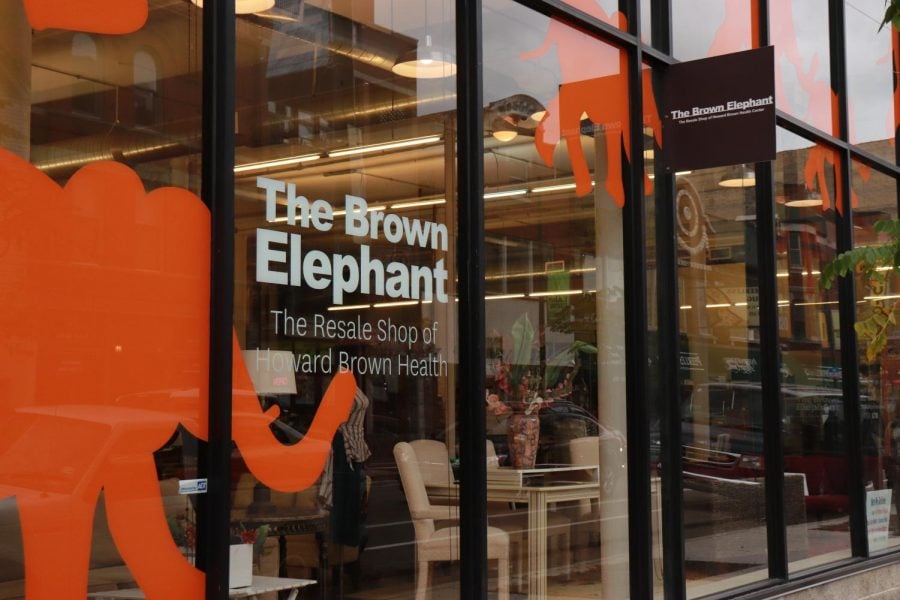 Resale store The Brown Elephant serves the people of Chicago not only with low prices, but with access to health services.

The Brown Elephant, founded in 1982, is an extension of The Howard Brown Health Center, a non profit medical organization with an emphasis on eliminating healthcare imbalances experienced by members of the LGBTQ community, according to the Howard Brown Health website. The stores sell a wide array of thrifted items, including furniture, clothing and dinnerware, among other items. There are currently three store locations, in Lakeview, Andersonville and Oak Park.

All of the proceeds from The Brown Elephant are received by Howard Brown Health, which are then used to provide care for uninsured or underinsured patients.

“[The Brown Elephant] was really born out of basically the need of community since Howard Brown’s origin is rooted in fighting the AIDS crisis and providing care for people living with HIV,” said Erik Roldan, the Director of Marketing and Communication for Howard Brown Health. “In the late 1970s and early 1980s, people were dying of AIDS and not being able to find compassionate healthcare anywhere. People were dying, and their families and friends wanted to give back to the organization that helped their loved ones pass on. We turned it into our business model as a resale shop.”

The promotion of sexual health is a major component of The Brown Elephant and Howard Brown Health. Their Oak Park and Andersonville stores give weekly HIV and STI tests, provided by an outreach team from Howard Brown Health. Locations occasionally have bowls of complimentary condoms near the cash register, in order to encourage patrons to practice safe sex.

Roldan said that the issue of sexual health remains important to the clinic partially due to healthcare struggles often faced by members of the LGBT community.

“Sexual health is just part of health,” Roldan said. “LGBT people in particular face a lot of discrimination in healthcare settings, so we really try to address people in an affirming and holistic way.”

Roldan said that one of the ways Howard Brown Health attempts to lessen the medical disparity faced by memebrs of the LGBTQ community is by providing specific services to transgender and non-gender-conforming patients.

Howard Brown Health also enables transgender and gender-non-conforming patients to be addressed by their chosen names, an issue often faced by members of each respective community in healthcare centers.

“In all our intake forms, we ask people what their gender identity is and what their chosen name is,” Roldan said. “We make sure that info is made available to all of our staff they may interact with, and staff are trained to ask about those things.”

Sexual health is especially relevant to college students. College students are within the age group with the highest risk for contracting sexually transmitted illnesses, according to an article by BMC Health Services Research.

“It is extremely important that young people have access to healthcare and a healthcare center when relating to sexual health,” said graphic design major Brett Vander Wielen. “It provides a low-cost option where people know they won’t be discriminated against for being who they are and loving who they love.”

“I’ve faced a ton of barriers in safe sex discussions and education about contraception here on campus, because we’re a Catholic campus,” said communications and media studies major Kate Graham. “Our RA’s and staff aren’t allowed to provide birth control to students, which I think is a huge health hazard to the student body.”

Testing for HIV and other sexually transmitted illnesses remains relevant to the gay LGBTQ community, with some thinking that there needs to be a greater emphasis put on sexual health.

“In the gay community, there needs to be more of a stress of getting test for HIV/AIDS for young men and transwomen,” said environmental studies major Al Russell. “This is something still that hasn’t gone away and needs to be talked about more.”

The Brown Elephant keeps a strong clientele due to their commitment of providing accessible healthcare, according to Rolden.