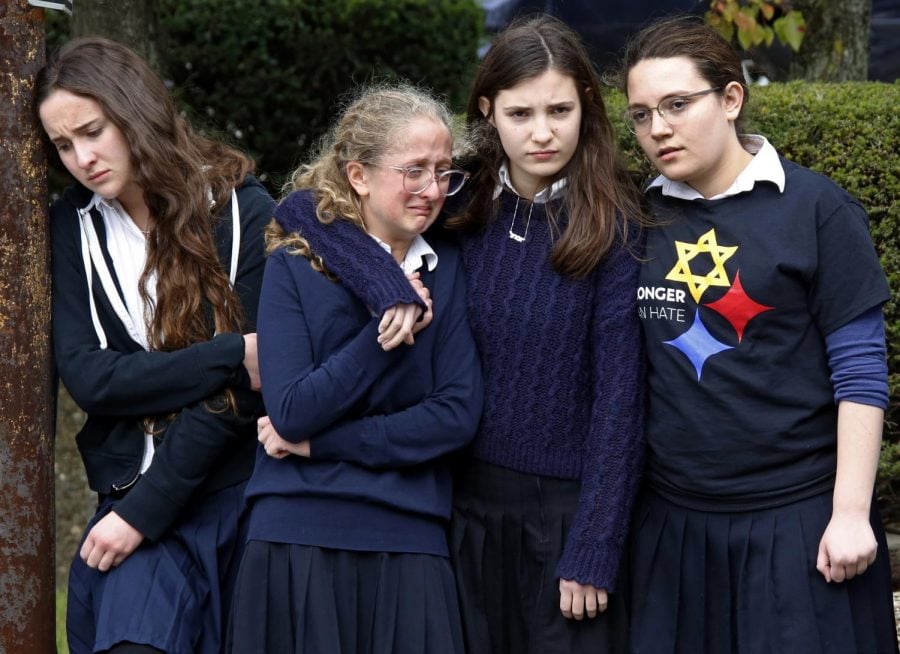 Students from a school near Squirrel Hill react following a funeral service at the Jewish Community Center on Tuesday Oct. 30, 2018.

At 13 years old, I didn’t have a care in the world. I was living with my family in the town of Deerfield, on Chicago’s North Shore, going to school, cheerleading practice, Deerfield Square after class – and synagogue. In heavily-Jewish, affluent Deerfield, I never thought twice about being Jewish.

Most of my friends were Jewish, and we all went to Hebrew school, had our Bar/Bat Mizvot and wore our Star of David necklaces freely. At Shepard Middle School, on a particularly snowy Thursday, end-of-the-day announcements over the PA system listed which synagogues had cancelled Hebrew School classes that evening. I was Jewish, and that was that.

In the bubble of the North Shore, I never felt like I was ever going to be at risk for being Jewish. Anti-Semitism was ancient history. I had no idea that there was a sect of Americans that wanted me dead. I had no idea that Trump’s America would make these people brave enough to threaten and even murder Jews in an affluent, Jewish community like Squirrel Hill in Pittsburgh.

That’s not to say I knew nothing about anti-Semitism before. Of course I had learned about the Holocaust. In synagogue and school alike, we heard the horror stories of Nazi Germany. I was disgusted and sad, but I didn’t relate to the material any more than I did to biblical stories of exodus from Egypt.

My grandfather had a different take. He met Morris Goldner, a Holocaust survivor, through my grandmother. When Goldner learned that my grandfather was a writer, he asked my grandfather to write his story. This story became the novel “A Match Made in Hell,” profiling Goldner, a Jewish boy turned resistance fighter in 1940s Poland. At 13, my mother finally decided I was old enough to read it, and when I was assigned by my English teacher to write a piece based on an author’s writing style, I decided to work with “A Match Made in Hell.”  I couldn’t capture the voice any author better than my own grandfather.

While I read the book and wrote my own tale based on my grandfather’s prose, I was struck by the similarities between Goldner’s pre-war life and my own. Suddenly, European Jews were not ancient figures from textbooks, they were real people like my family, my friends, and myself. They lived lives not unlike mine until the Nazis murdered them. My grandparents knew Morris Goldner, who had witnessed these horrors. This was real.

I vividly remember sitting in my English classroom on the second floor of Shepard Middle School, surrounded by my peers and friends, writing my story in my grandfather’s language.  Suddenly, I imagined Nazis rounding us up and putting us in train cars, Jewish middle schoolers who I knew and loved, who fought our parents for the newest Juicy Couture sweatsuit or for money to buy vending machine ice cream. I pictured my mom, who I had yelled at that morning for not leaving the house fast enough on the way to school, my dad, my brother, my sisters, all walking past “Arbeit Macht Frei” at gunpoint, entering Auschwitz. We were no different than Morris Goldner’s family, other than living in a different time and place.

On Saturday morning, eight years after my assignment, I sat in my living room watching news coverage of the shooting at the Tree of Life Congregation in Squirrel Hill. A congregation like mine, in a community like mine, attacked by a man saying he wanted “All Jews to die”.

I found myself feeling all those same feelings as I did at 13. I could picture my family, my fellow congregants and myself, fearing for our lives at what should be a safe, sacred place.  Synagogue has always been a refuge for me. Going to Shabbat services, like all of those people in Squirrel Hill did on Saturday, gives me a break from the whirlwind of school, work and current events where I can connect with and be grateful for the present moment. By entering a synagogue full of people praying on the sabbath and shooting, Robert Bowers destroyed that refuge. After Saturday, not even a synagogue can be a safe place to pray and practice Judaism.

Even as a Jewish woman from an affluent Jewish community, I suddenly feel afraid of being Jewish. I feel afraid of going to synagogue, of wearing the chai necklace I wear every day, in America, in 2018. Under our current administration, domestic terrorists feel safe.  And I, and others like me, cannot.

When I spoke to my grandfather today, to tell him that I was thinking about writing this essay, he reminded me of a famous poem by German Martin Niemoller from 1934:

First they came for the Socialists, and       I did not speak out—

Because I was not a Socialist.

Then they came for the Jews, and I did not speak out—

Because I was not a Jew.

Then they came for me—and there was no one left to speak for me.

I am Jewish, and I am afraid.  My black friends, my Muslim friends, my Hispanic friends, my LGBTQ+ friends—we are all afraid. Too many people with minority identities have lost their lives. No one else needs to die. So I am speaking out, so we all must speak out, before there is no one left.