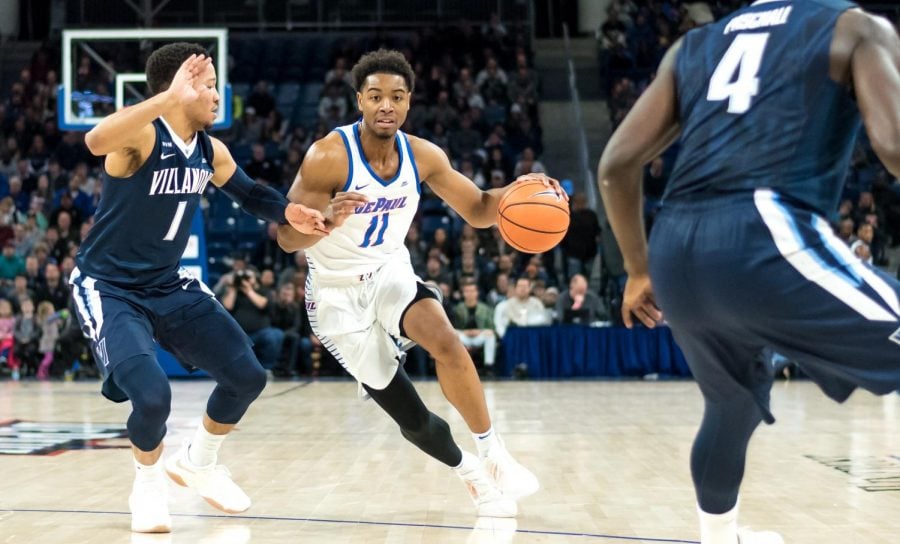 Mired in a back and forth stalemate with Big East Conference rival Xavier on Saturday, things took a turn for the worst when DePaul Blue Demon star Max Strus picked up a fourth foul with 7:52 remaining, forcing head coach Dave Leitao to yank him from the game at a critical juncture

Thank goodness for Eli Cain. The 6-foot-6-inch senior willed his team on a 9-2 run in which he scored or assisted on all nine points to inflate the Blue Demons advantage to 61-55 with just over five minutes to play. The Blue Demons wouldn’t win the game, but Cain’s personal heroics kept them competitive late.

Cain’s most impressive play of that sequence? Arguably, it wasn’t the off balance, fallaway jumper just below the free-throw line that led to a three-point play and bailed the Blue Demons out at the end of the shot clock. Rather it was this play, a no-look feed to big man Femi Olujobi that resulted in an easy layup.

The play offers a microcosm of the new reality of Cain’s game. Over the last two seasons, he’s evolved into one of the Big East Conference’s best playmakers, a stark contrast to his first two years at DePaul when his contributions on offense mostly came in the form of scoring.

“I think this year, everything has fallen in place,” Cain said. “I’m pretty much just showing my whole game. I’m scoring the ball pretty well, still assisting, my assists are higher than last year. I think this year I’m putting all the things I’ve learned through the years into one and so far I think I’m doing a pretty good job at it.”

Cain’s 4.5 assists per game leads the Blue Demons this season and is good for the fourth-highest mark in the Big East. He tied his career high with 11 assists against Chicago State on Dec. 12 and has distributed four or more dimes in seven of his 12 games this season. He’s done all of this despite wielding a career-low usage percentage of 21.0 (the number of plays a player uses while on the floor; basically a measure of how involved a player is offensively).

The ability to balance the passing with averaging 14.2 points per game is something Leitao has noticed about the evolution of his game from his freshman to his senior year at DePaul.

“His ability as both a distributor as he was last year and to be able to get back into the mold of one of our primary scorers,” Leitao said when asked what has changed with Cain’s game during his time at DePaul. “There’s still a lot of work to be done on that end from a consistency standpoint but I think he’s done a really good job of balancing this year which isn’t a really easy thing for somebody who is used to scoring. It’s difficult to decide every time down [on offense] should I look at the rim or should I look at my teammates.”

Cain also continues to march up the Blue Demon’s all-time list in career assists. He came into his senior season with 286 total assists, good enough for 22nd all-time in DePaul history. The 54 assists he’s distributed this season has ballooned his total to 340 which has catapulted him to the No. 16 spot on the all-time list.

It’s an impressive transformation for a player who didn’t flash that part of his game much his first two seasons at DePaul. Regardless, Cain said playmaking has always been part of his game, it just took the right situation for it to blossom.

“I think if you asked anybody who saw me play they would say that I’ve always passed the ball,” Cain said. “That was always one of my biggest strong points. My freshman year, it’s just different in college because there are so many different scouting reports and guys are stronger, faster and more athletic. It was hard my freshman year. I would try to throw those same passes I’d throw in high school and they’d get tipped and stolen. I think I began to figure out the game and everything slowed down. I began to see things better than I used to.”

Early on in his Blue Demon career, passing the ball wasn’t a focal point of his game.

On teams lacking a large quantity of weapons offensively, Cain was mostly called on to score his first two seasons at DePaul. The combined total of assists he tallied in his first two seasons with the Blue Demons (140) was lower than his total from the 2017-2018 season (146) when an early season injury to Devin Gage forced him into the de facto point guard role.

With Leitao reticent to overplay freshman point guard Justin Roberts last season, it was Cain who had to relearn on the fly the position that he had played so well in high school. Even with Gage back healthy this season, Cain frequently captains the offense from the point guard position. Nobody has emerged as a consistent true point guard option behind Gage this season, so when the redshirt sophomore sits it’s Cain who is left running the offense.

Cain and Gage have combined to distribute 54 percent of the Blue Demons total assists this season. Their teammates appreciate how much both guys have made their lives easier offensively.

“My teammates put me in really good position,” Olujobi said. “They draw a lot of attention driving the ball and I have the easy job just catching and finishing.”

The other layer of playmaking is not turning the ball over. It’s something that Cain has done better this season than at any other point during his career. He’s averaged a career low 1.9 turnovers per game, had just two games where he’s had more turnovers than assists, and sits at fourth in the Big East Conference with a 2.3 assist-to-turnover ratio.

“Honestly, I think if I had to pick one basketball pet peeve I think that would be it [turnovers],” Cain said. “I hate turning the ball over, that’s something I’m really conscious of. Like I said, everything is just really the game slowing down. I’m not forcing anything. My teammates make it pretty easy if I throw a bad pass they’re going to catch it and finish. It just instills more confidence in me that if I throw a pass, guys are going to finish. Just the experience, watching film, talking to coach Tim [Anderson] and coach Leitao. Knowing my guys. Knowing where they like their spots [have all helped me commit less turnovers this season].”

With an ability to explode for 20 or more points on any given night, a consistent 3-point shot, and athletic ability that manifests in circus layups and big dunks, Cain’s playmaking isn’t the flashiest part of his game.

But behind many Paul Reed alley-oops or Max Strus threes this season, there will be an Eli Cain pass that made the highlight reel play possible.