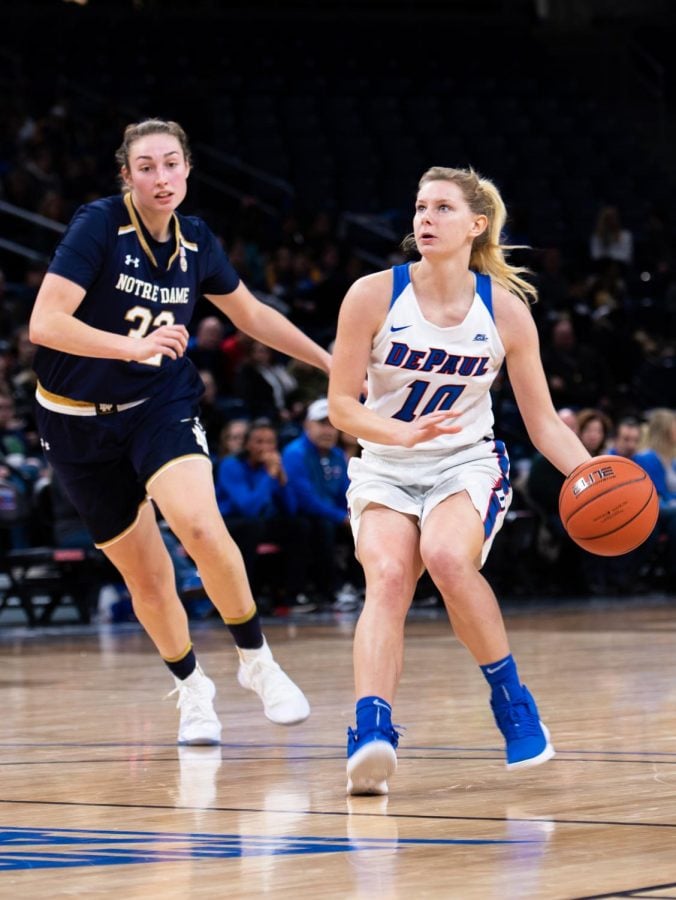 DePaul freshman Lexi Held pulls up for a jumper against Notre Dame on Nov. 17 at Wintrust Arena.

DePaul women’s basketball has been a perennial powerhouse in the NCAA for years. Having won six consecutive Big East regular-season championships and two straight Big East tournament championships, DePaul head coach Doug Bruno has created a program that attracts some of the best young players in the nation.

This year is no different for Bruno and his squad, having landed talented freshmen who are eager to make their impact on the court right away. DePaul has six freshmen listed on their roster for this season, but the two who have played the most this season are guards Lexi Held and Sonya Morris.

When the season began in November, Held and Morris had different roles on the team than they do now. Morris began the season starting six out of the first seven games before being replaced in the lineup. Held, on the other hand, has had to be more patient.

“Sonya started some of our earlier games because of her competitiveness and her motor,” Bruno said. “Lexi was given some opportunities and she did a great job of scoring the ball in those limited early opportunities.”

In her limited minutes, Held was able to provide Bruno with evidence that she can really play. Because of that, she stayed confident that her time to shine was soon coming.

“He [Bruno] kept reminding me that I’m good enough to play here and that I had the ability to play, but I had to build my confidence up and by getting on the floor and my teammates and the coaching staff encouraging me it gave me confidence to play my game,” Held said.

Not until the sixth game of the season did Held see extended minutes on the floor, and in 23 minutes of action against Savannah State she had a career-high 28 points on 11-18 shooting and shot 5-10 from the three-point line. Although the game ended as a blowout in DePaul’s favor (124-61) Held gained valuable experience and her confidence skyrocketed.

After that game against Savannah State, Held began seeing more playing time and had arguably her best game of the season against Oklahoma. In the second half, the Sooners went on a big run that cut the Blue Demons lead to six points, and Held contributed by knocking down big shots to keep DePaul in front. She finished the game with 17 points, shooting 7-11 from the field and 3-4 from the field.

However, when it comes to playing for Bruno, both Morris and Held have realized that Bruno will give players playing time based on their performance that specific game. 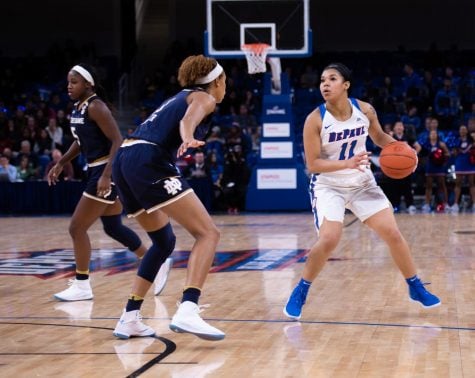 “Bruno doesn’t choose who he plays, we have to make him play us,” Morris said. “I really like it because he really pushes me mentally and physically, he expects a lot from everybody, he expects hard work and for everyone to compete.”

Bruno expects his players always to play hard and  has said numerous times this season that he has no problem benching them during the game.

“I really believe every game is a life of its own, I say that and I preach that to the players and every season has a life of its own,” Bruno said. “Coach’s time is practice time and that’s when we work to help the players and then when the games start to me it’s player’s time. I try to put them in positions to play to their strengths and stay out of their way the best way I can. I’m going to play the players that make me play them and they are the ones who determine their minutes. The players determine when they get in and how long they stay in for by the mpact they are having on the team”

When discussing their move from high school to college basketball, both Morris and Held mentioned that the biggest adjustment for them was the speed of the game.

The speed of the game is now amplified even more with the start of conference play. Now that the Blue Demons have played three Big East games this season, going 1-2, both of the freshmen have noticed the change in play and how tough it is to get wins in the conference.

“The teams don’t get easier at all,” Morris said. “We kind of had a rough start to conference play, so after a lot of team meetings we understand that we just have to get our stuff together, especially if we want to make the NCAA tournament. We just got to be ready to play each game, we have to be prepared and take any adversity that comes our way and turn it into a positive.”

With 15 games remaining before the Big East tournament, Morris, Held and the other freshmen will be looking to continue improving their games and having an impact on the court whenever they check in. However, Bruno has pointed out that he will play freshmen to give them experience, but he won’t risk playing them if it doesn’t contribute to the team winning games.

“I want to play to their strengths while we work on their weaknesses and give them a chance to play,” Bruno said. However, at the same time, our program is too far along for us to take losses over freshmen getting experience, so whether the game is going to be won or lost has to become a priority over whether or not you will give them time to play.”