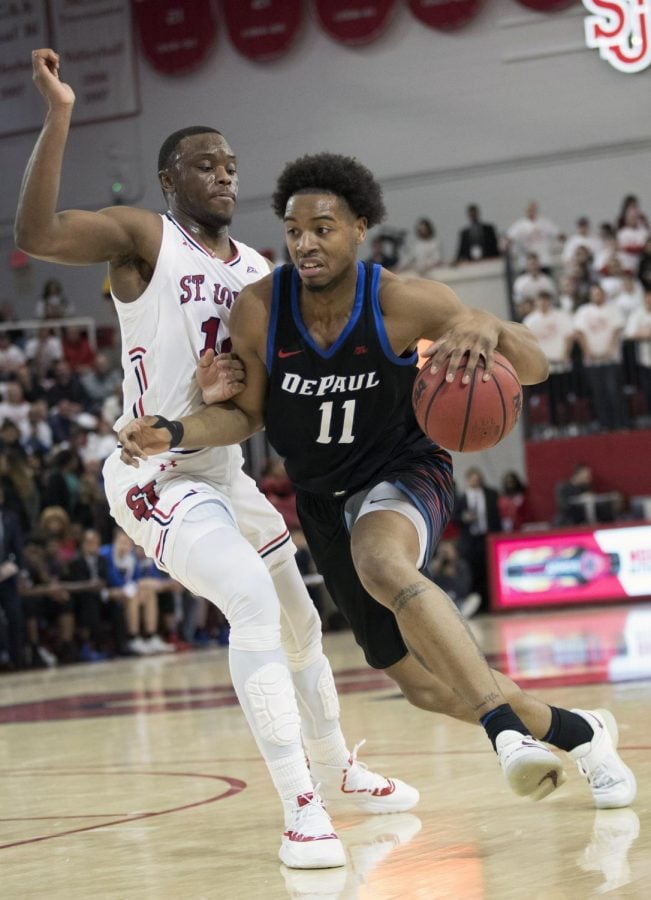 Throughout the first 14 games of DePaul’s (10-5, 2-2 Big East) season, the Blue Demons were searching for a complete game that they controlled for the entire 40 minutes. In game 15, against the No. 24 ranked St. John’s, DePaul finally delivered with undoubtedly their best win of the season on Saturday. The Blue Demons dominated from start to finish, winning 79-71 in the end at Carnesecca Arena.

Prior to the game, though, DePaul, received some good news when St. John’s announced that leading scorer Shamorie Ponds would not play due to a lower back injury. Ponds has clearly been St. John’s best player this season, averaging 20.6 points and six assists per game. In conference games, Ponds’ however, averages 23.5 points and six assists per game.

“I found out today,” St. John’s head coach Chris Mullin said of Ponds being unable to play. “Obviously he is a great player, so without him, we approach things a little differently. Any time you take your best player off the team, it has an effect. We came out and we played okay. A little passive, I thought, but overall, in the second half, we picked up our energy. We just need to play through.” 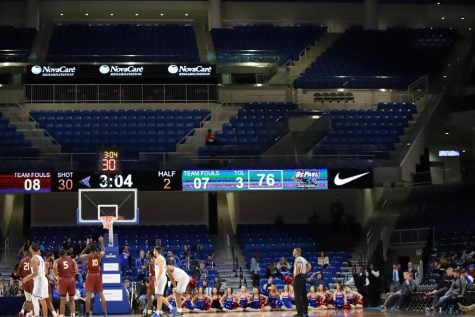 When DePaul got news of the injury they had to shift their focus from Ponds to the rest of the St. John’s team who still proved to be a tough out for the Blue Demons. The  Blue Demons, for the most part, were able to limit St. John’s from going on any big, momentum shifting runs, they still had to account for LJ Figueroa and Justin Simon who combined for 43 of the team’s 71 points.

“Right before game time,” DePaul head coach Dave Leitao said on when he learned Ponds would not be playing. “You still have to play, we obviously changed a couple of coverages because he’s such a special talent, but overall we still had to execute on offense. We thought we could get the ball inside and we were still able to do that. We felt like we needed to execute and we did a decent job of doing that. Then our defense made a couple of last-minute adjustments without [Ponds], but at the same point of time we had to guard the three-point line because they shoot it so well.”

Coming out of the gate, both teams struggled to score from anywhere on the floor as both defense’s were able to stifle the opposing offense in the first half. St. John’s, who had a height disadvantage against DePaul, was still able to block six shots in the first 20 minutes. However, after a 15-minute break the Blue Demons came out more prepared and with more energy in the second half, and it showed with them putting up 48 points in the final half.

However, when both Reed and Olujobi came out of the locker room to begin the second half, the two stepped up their game. The pair dominated St. John’s inside combining for 31 points in the half. Every possession down Reed and Olujobi traded opportunities down low, attacking their defenders and getting any shot they wanted inside five feet.

Olujobi, who is from New York, was playing in front of 50 friends and family members on Saturday, and looked like he was trying to impress them with his dominant display.  Ultimately, Olujobi finished with a season-high 27 points and eight rebounds while Reed recorded his first  career double-double with 18 points and 10 rebounds.

“We have been talking all along that we have three guys, not just those two, that we can go to down low,” Leitao said. “As good as they are at scoring, they are unselfish and they will share it when they draw double teams. A guy like [Femi] is very good who we went to, Paul, very good, one-on-one particularly against a team that has a disadvantage size-wise they were able to come through.”

With the size advantage that Olujobi and Reed had over St. John’s, they were able to punish the Red Storm inside, but also were getting fouled at the same time because St. John’s had such a tough time compensating. Within the first 10 minutes of the second half, the Red Storm had already racked up 10 fouls. The Blue Demons ended up taking 23 free-throws in the half while St. John’s only took three.

“They got whatever looks they wanted down there,” St. John’s redshirt junior guard Justin Simon said. “They also got offensive rebounds. We just didn’t box out, didn’t rebound and they punched us in the post.”

DePaul was able to punish St. John’s on the glass throughout the night — especially on the offensive glass where the Blue Demons had a 14-6 advantage on the night. Reed, Olujobi and senior guard Max Strus combined for 30 of the team’s 40 rebounds.

Another key concern coming into the game was whether DePaul would be able to slow down a St. John’s group that entered the game shooting over 40 percent from behind the arc this season, the second-highest in the Big East. The Blue Demons this season has struggled to defend the three-point shot, allowing teams to shoot 35 percent from behind the arc, which ranks 244th in the country. However, without Ponds, who shoots 40 percent from the three-point line, the Blue Demons held the Red Storm to only 26.3 percent.

St. John’s was able to stay close late in the game as they went on a run to cut DePaul’s lead to five with a minute to play. But the Blue Demons did a good job of closing out their second straight win in the Big East — something they haven’t done since Jan. 2015. The win over St. John’s gave DePaul their first win over a ranked opponent since Feb. 2, 2016.

“We are still going to focus on everything that has everything to do with each day,” Leitao said. “Tomorrow we are going to wake up and we are going to watch film, get rest and get ready for Wednesday. This league requires you not to look ahead or rest on our laurels, even when you lose to not get too down on yourself because tomorrow brings another high quality opponent.”

DePaul will be back in action on Wednesday to host Butler, where they will look to improve to 11-5 overall and 3-2 in the Big East.