Snap back to reality: DePaul falls to Bulldogs at Wintrust 87-69 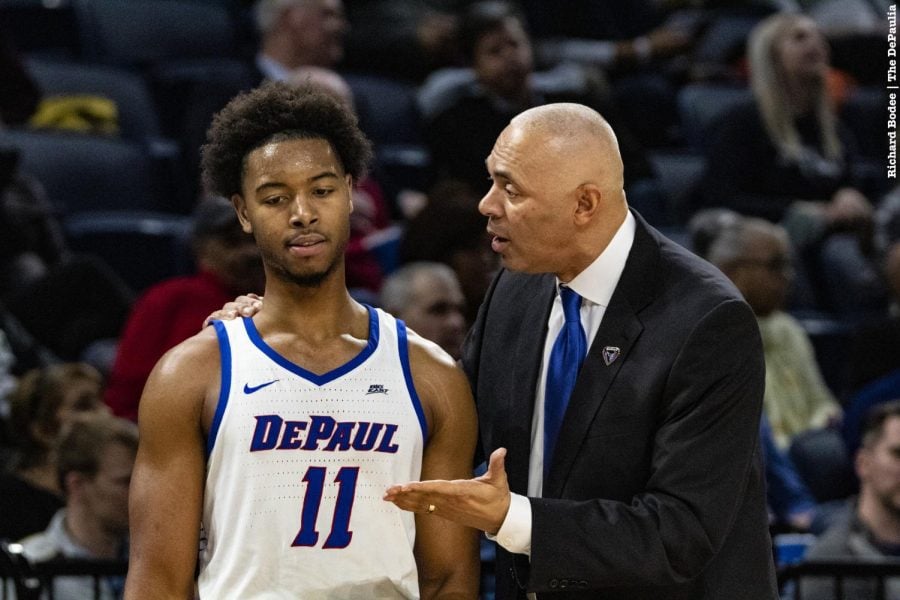 DePaul fell to Butler 87-69 at Wintrust Arena on Wednesday night, snapping a two-game winning streak. Richard Bodee I The DePaulia

Riding the wave of a two-game Big East Conference winning streak, a 87-69 loss for the DePaul Blue Demons (10-6; 2-3) against the Butler Bulldogs (11-7; 2-3) at Wintrust Arena Wednesday night felt like a reality check.

“Every single game is its own entity” Blue Demon head coach Dave Leitao said after the game. “It’s going to take a yeoman’s effort both in preparation and in execution. There’s no gimmies. There’s no assumptions, so you have to take every possession in this league extremely seriously. If you don’t, it’s going to bite you in the rear end. It was our turn to get bit and we have to be able to respond.”

A familiar script sunk the Blue Demons early in the second half: they surrendered a splurge of 3-point field goals and slumped through a long scoring drought, digging themselves a hole they weren’t able to climb out of.

In the first five minutes of the second frame, Butler hit five of the first six field goals they attempted from 3-point land. The last three of those were part of a 17-0 run across 4:10 of game time that featured a 4:29 scoreless drought for the Blue Demons and vaulted the Bulldogs to a 15-point lead as Blue Demon point guard Devin Gage broke the scoring drought with a free throw with 12 minutes to play.

“I think it was transition,” Butler head coach LaVall Jordan said after the game about that run. “We put Jordan [Tucker] in the starting lineup and he’s helped on the glass and that allowed us to really get up the court and play in transition. The beginning of the half was all about us getting stops and finishing possessions which was a big emphasis coming into this one.”

It’s a disappointing result after 75-74 and 79-71 wins against Seton Hall and St. John’s respectively last week gave the Blue Demons their first two-game winning streak in Big East play since January 2015. Guard play was particularly bad tonight with Eli Cain, Devin Gage, and Max Strus combining to shoot 8-for-37 from the field for the game and two points in the second half.

The Blue Demons scrambled out to a 26-19 lead by the under eight-minute timeout in the first half behind eight points from Olujobi including two 3-pointers (he hit three in his previous 15 games this season). Butler took their first lead of the game at the 2:32 mark in the first half off a contested 3-pointer from Tucker.

When the dust settled and the teams retreated to their respective locker rooms at halftime, DePaul held a slight 40-36 advantage behind 10 points on 4-for-6 from the field from Olujobi and an efficient 4-for-7 for 12 points from Strus. DePaul outrebounded Butler by three but shot 5-for-13 from the 3-point line to negate Butler’s 6-for-17 showing from that range. Butler turned the ball over seven times in the first half after only averaging 10.6 turnovers per game in their previous 17 games (14th lowest in the nation coming into tonight).

“Yes, I think all three of us playing together with how well we play as well as Max [Strus], he plays the four it’s not just scoring the ball we just come in and all have certain specialties that are better than the others,” Olujobi said when asked if he thinks he, Reed, and Butz are the best big man unit in the conference. “They complement each other very well and whenever we play we end up in a good position.”

DePaul’s next game is Saturday against Seton Hall. The Blue Demons beat the Pirates 75-74 at Wintrust Arena on Jan. 6.