Femifest gears up for fifth anniversary 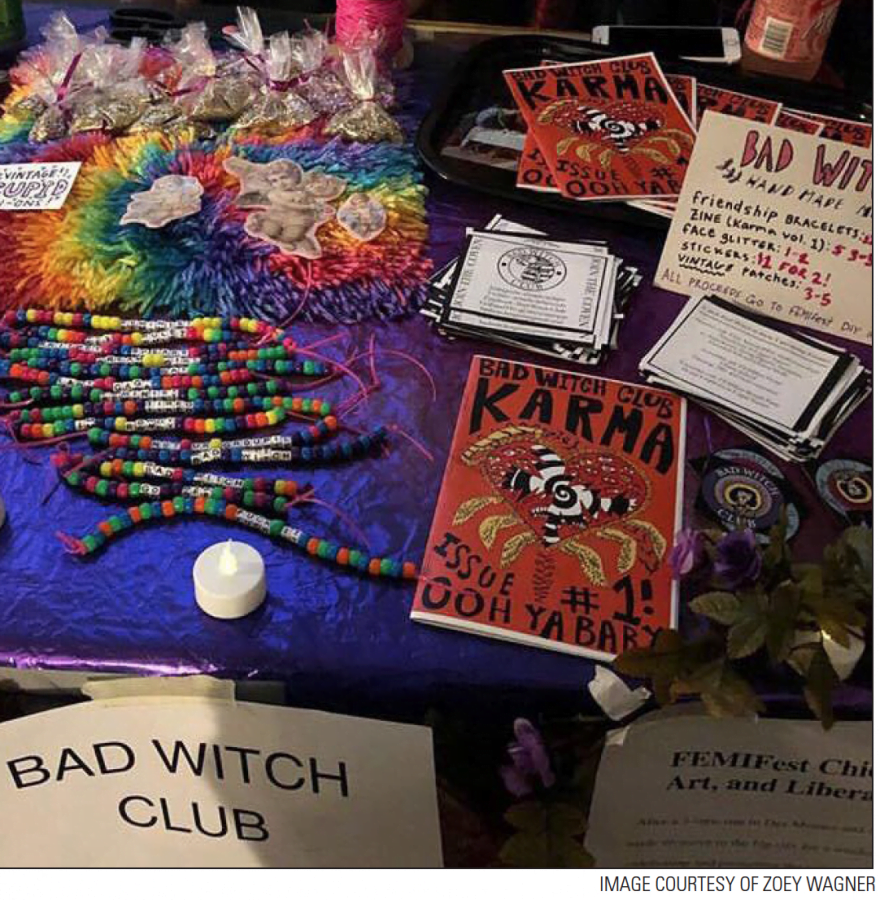 A stand of Bad Witch Club memorabilia at the goth prom fundraiser.

Nestled in a quaint, unassuming Ravenswood apartment, Zoey Wagner, Elma Husetovic and Archie Budzar work tirelessly in preparation for their latest celebration of queer and femme liberation in music and arts, known as Femifest.

Based in Des Moines, Iowa, Femifest began in 2015 as a benefit for the young feminist club at Wagner’s high school.

“The DIY scene in Des Moines had just started booting up again,” Wagner said. “I was really fascinated with the idea that you could create a space for art and music literally anywhere.”

What began at a dive bar in downtown Des Moines eventually made its way to Chicago when Wagner—now at Columbia College—began studying at DePaul in 2017. Wagner met the members of pop group Drama Moth, Michael Brandt, Budzar and Husetovic, while they were also studying at Columbia.

“Music was always our main ‘thing’ as a friend group and I think that’s what really brought us together,” Budzar said. “We wrote and produced our first EP entirely in our dorm and I completely fell in love with it.”

Coming from different musical backgrounds, the trio came together to form this experimental pop group to create spacey tunes while also advocating for LGBTQ+ representation.

“It’s been great to step into the place of the artists that I didn’t really have growing up,” Budzar said. “When I was a teenager just getting into music, there weren’t many people that I could say ‘they’re like me,’ so I hope that other people can kind of see themselves in us.”

Wagner held the fourth edition of the festival at Caliwaukee—a popular DIY venue in Logan Square—last February. Per its mission, the lineup was comprised of queer and femme artists and the event featured an art gallery, crafts and tarot card readings.

“My first DIY show was actually Femifest,” Husetovic said. “I used to go to bigger shows to see artists that everyone wanted to see, but once I started going to DIY shows with queer artists I realized this is how it should be.”

After the successful show, Wagner booked a summer tour for Drama Moth but wanted to build a new brand for themselves.

“We were all at this park in Archie’s hometown and they were talking about a band that they were performing with called HXXS,” Wagner said. “They have this song with this line, ‘you can’t keep a bad witch down’ and I thought it was so cool. They let us use the lyric as the name of our new project.”

After toying around with some names, the project came together almost magically.

“As soon as she said Bad Witch Club we knew it was what we wanted to be called,” Husetovic said.

Aiming to empower marginalized individuals within arts and music, the trio now utilizes Bad Witch Club for all its creative endeavors.

“It basically was a preview to Femifest,” Budzar said. “While it was only one night and there wasn’t a gallery, it gave everyone an idea of what to expect. And some of the bands will be playing Femifest.”

Femifest will take place on Feb. 15 and 16 at DIY venues Auxiliary Arts and Hostel Earphoria in Logan Square. Beach Bunny, Drama Moth, Glitter Moneyyy and String Figures are just some of the acts slated to perform. In addition to the live music, the festival will once again have an art gallery featuring up and coming LGBTQ+ artists along with interactive booths and craft vendors.

Amidst the intense preparation for this year’s festival, the trio is already planning the future of Femifest.

“I never thought that it would become what it is becoming,” Wagner said. “I think our next event after the festival will be a block party. What I would really love is to get our neighborhood involved because I think it would be really cool to feature queer, female and non-binary artists from around the Chicago community and make it like a family event, not just something college kids can have a good time at.”