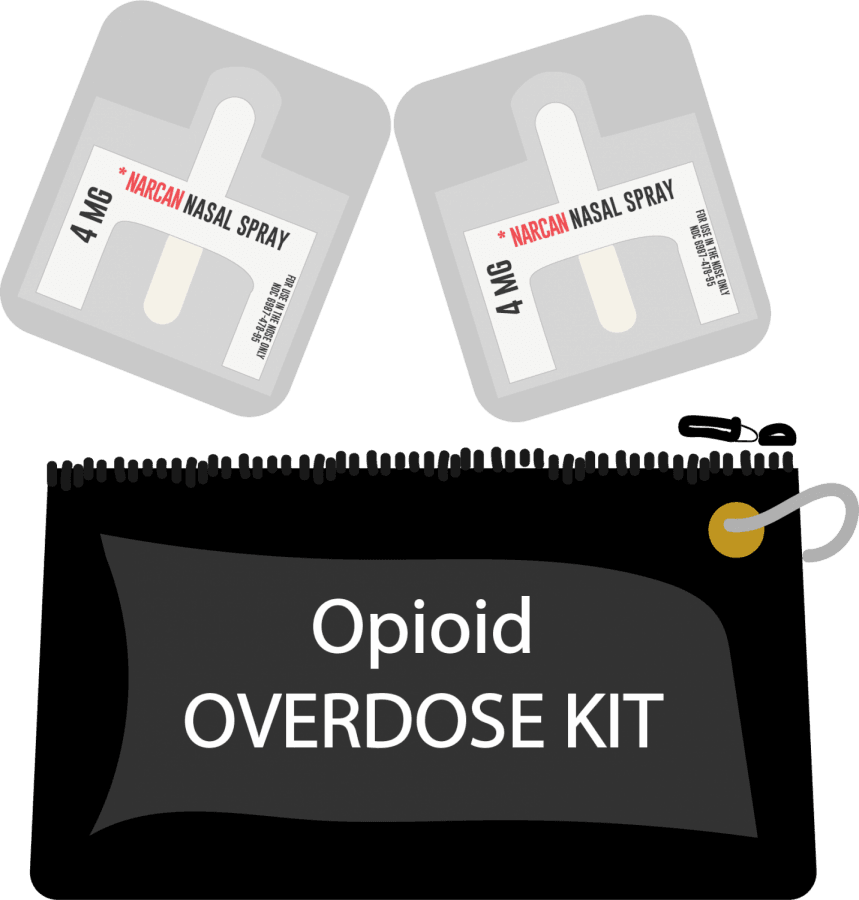 In November 2018 in Chicago’s Wrigleyville neighborhood, there were five opioid overdose deaths recorded in the span of two days. One of those deaths was a 22-year-old DePaul graduate. He became one of 13,181 20-30-year-olds to die of an opioid overdose in the U.S. this year.

Every day, more than 130 people in the United States die after overdosing on opioids. In Illinois, opioid overdoses have killed nearly 11,000 people since 2008, according to the Illinois Department of Public Health. Students at DePaul try to embody the Vincentian mission, asking what must be done? Dominique Coronel is one of the students taking it upon himself to do exactly that.

Coronel, a vice president of Students for Sensible Drug Policy at DePaul, decided to take it upon himself and his organization to push the University administration to change its policies regarding the opioid crisis.

“The opioid crisis has been going for so long, and people tried to advocate for it for so long, but there wasn’t a lot of pressure on the administration to really get the ball rolling,” Coronel said. “What we did as an organization on first day of school of fall quarter, we met with the dean to let her know that it is something that needs to be addressed.”

To address it themselves, Coronel and Students for Sensible Drug Policy [SSDP] worked with Roosevelt University and DePaul’s Student Government Association to draft a new policy for the university. Their goal was to make DePaul change its policies to permit students access to naloxone and naltrexone, so-called “opioid-antagonist drugs,” in residence halls. Since the number of opioid overdoses continues to grow, Coronel believes this new policy is good precautionary measure for DePaul to take.

“As a result of our advocacy and hard work, President Esteban has personally approved a plan to roll out the medication throughout our university,” Coronel said.

Esteban and senior administrators have given full support for implementing an opioid overdose reversal program at DePaul. The effort was coordinated by the Department of Student Affairs under the direction of Vice President Gene Zdziarski.

“The opioid crisis is very real in our country and having resources on our campuses that could possibly save a life was an action senior administrators wanted to take,” Zdziarski said. “With input from students and student organizations, including Students for Sensible Drug Policy at DePaul and SGA, and from our student health care provider, we developed a program during the past couple of months to have opiate overdose kits available on both campuses that could be used when a member of the DePaul community or a member of the public was in an opiate overdose situation.”

There are 32 opiate overdose kits in 29 locations on both the Loop and Lincoln Park Campuses, and more than 100 people have already been trained to use the kits. They include Narcan, a Naloxone nasal spray that can counteract opiate overdose symptoms. The kits have four doses of Narcan, as multiple doses may be necessary.

“This past December, one hundred first responders were trained to identify the signs of an opioid overdose and how to administer the nasal spray when necessary,” said Shannon Suffoletto, director of the Office of Health Promotion and Wellness. “First responders include public safety officers, select staff in Housing Services and Student Centers, as well as professional staff and Residence Directors in Residential Education. A comprehensive training aimed at educating our community at large will be offered for all those interested in learning more about this epidemic, including addiction and recovery, as well as how to administer Narcan.”

But that’s not the only thing that DePaul students have done. According to Coronel, SSDP wants to achieve more substantial change at DePaul and continue to educate students about the opioid crisis. One of these new initiatives is a partnership with the Office of Health Promotion and Wellness as well as with SGA to develop a task force dedicated to campus education programs. On February 12, this task force will host a town hall hosted by SSDP to speak with students about the opioid crisis and what they can do about it. A representative from the Office of Health Promotion and Wellness will speak at the town hall on this new opioid overdose prevention program.

Coronel is particularly looking forward to the guests who will attend the event, including officials from SSDP.  “At the national level, we have our drug educational manager, who’s going to come and talk about the holistic approach [to addressing the crisis],” Coronel said. “And we are also going to have Campus Mission and Ministry there to lead us in prayer, and honor the lives of those lost to opioid overdose.”

According to Coronel, the event will serve several purposes. In addition to being a educational opportunity and a chance to share progress SSDP has made with the university, it will be a safe place for people who have been directly impacted by the warn drugs and the opioid crisis.

There are people who are dying because opioids every day, but not so many are aware of it. Illinois state Rep. Kelly Cassidy said in a TV interview on Chicago Tonight that we need more change.

“We need to do a lot of things, including more public education, a lot more thoughtful work,” Cassidy said. “We have fallen down on the behavioral health and treatment side of things.”

According to Coronel, people generally react positively to the work that SSDP does. He says that after every speech he gives to students about drug overdoses, he gets people approaching him to say how thankful they are for the outreach work being done.

“You have students come up and thank us for the work, as they say hey, I’ve lost my brother to opioid overdose, dad, etc. Me personally, I lost my mother to drugs,” Coronel said. “That’s the big reason why this work is so impactful to me, and I see that in souls and voices of so many people, related to me… us.”

Even though SSDP has been working on this project since September, many students are still unaware of the new changes that DePaul administration made. This seems mainly to be because there hasn’t been any coverage to deliver the news to students. Coronel said that it makes him feel very sad and somewhat angry of the fact that students work so hard to push for this movement for it’s not being acknowledged.

“Being the largest Catholic School, DePaul is very careful of how they go about things” Coronel said. “Once we said that we will protest, lining out on the quad with people representing the death those lost to opioid, DePaul decided to legalize it, not to have a bad press.”

With these new administrative policies in place, it would appear Coronel’s activism with SSDP was effective in bringing about change on campus.

“In developing the program, we’ve spoken with other schools and realize we’re on the forefront of this type of initiative, which in many ways is an expansion of our approach to drug and alcohol prevention education, and our philosophy and commitment to Take Care DePaul,” Zdziarski said.