Sullivan Menard is trying to put Alaska basketball on the map 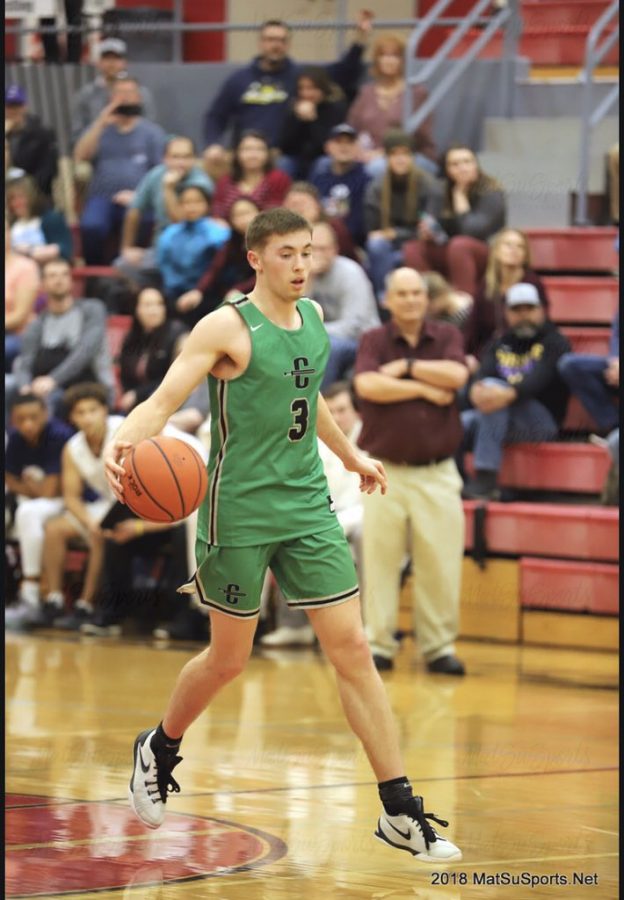 Sullivan Menard from Palmer, Alaska will be a preferred walk-on for the DePaul Blue Demon men's basketball team next season.

Sullivan Menard, the latest recruit to pledge his services to the DePaul Blue Demon men’s basketball team, has an A-list story to tell about how the union between himself and DePaul University came about.

“My cousin’s girlfriend’s sister’s fiancé is [Blue Demon assistant] coach Shane Heirman,” Menard said. “One day my uncle called me, we were in Arizona for a tournament in high school, and he was like hey I have a connection to DePaul and I was just like hey that’s cool they probably aren’t going to look at a kid from Alaska. I’m nothing that jumps off the board, just a 6-foot-3-inch [player]. I’m athletic, but nothing crazy. I was like we’ll see [if he actually looks at me.] I’ll send it [a highlight tape] out to him. So I talked to my cousin and he was like yeah send me your tape, coach Heirman can help us even just get your name across there. My cousin sent it out to Shane and Shane hit us back up and was like hey I can help you, I think you can help us here. What do you think about a preferred walk-on position? That’s kind of how it all happened. It was definitely spur of the moment and it kind of all happened in three or four weeks. I went on a visit and just thought this was the right place.”

Approximately 500 miles separate Alaska from the mainland United States. Unless a prospect owns transcendent talent, it’s difficult for Division I programs to justify expending resources to travel all that way to watch him play. According to the RealGM.com database, there are currently seven players from Alaska at Division I basketball programs. Only two of those players, Brandon Huffman of North Carolina and Kamaka Hepa of Texas play in major conferences [Pac 12, Big 10, Big 12, SEC, ACC, or Big East]. Huffman had the advantage of finishing out his high school years playing ball in North Carolina, while Hepa played his final two years of high school ball in Oregon.

There’s been one Alaskan-born player who has made it to the NBA (Mario Chalmers) and three NBA players have attended high school in Alaska (Chalmers, Carlos Boozer, and Trajan Langdon).

Menard, a guard from Palmer, Alaska which is a 47 minute drive from Anchorage if you hop on Glenn Highway and drive southwest, doesn’t have a recruiting profile on 247sports.com or Rivals.com. Last year, he marketed himself through his Hudl.com profile which consists of an extensive Facebook-like timeline complete with quick-hit highlights of him hooping. There is some information on him on MaxPreps.com. The self-advertising coupled with the chance connection with Heirman helped Menard get attention in a state that doesn’t always garner a ton of attention on the basketball front.

“[I’m] super excited because the kid deserves it, he knows it’s a great opportunity, certainly there’s not a lot of Division I kids out of Alaska,” Menard’s head coach at Colony High School Thomas Berg said. “We have had a few more as the years have progressed but certainly that’s a big deal. He’s worked really hard for it. For a lot of kids in this state it’s a question of do you go to a good Division II school or do you go to a good NAIA program or do you push yourself? Sully [Sullivan Menard’s nickname] has always been a kid that pushed himself, he’s always done what we’ve asked plus more than we’ve asked so that part is always good.”

“So, for us it shows our state that if you work your tail off you don’t always have to be the physical specimen or have the elite physical characteristics that allow a lot of those guys to play at that level. You can work your tail off and certainly have a little bit of help and have the right person see you. This year in particular, we’ve beaten some pretty good teams, we beat St. Rita down there in Illinois and we beat that team out in Texas that is No. 2 in 6A [United High School in Laredo, Texas]. All of those things add up, there is no one single thing that has defined Sullivan up to this moment. It’s the four years and really truthfully the six or seven years of deciding that it was important and then deciding it was important enough to go to a camp and then it was really [important] enough for him to decide to go work on his own when no one is watching.”

Menard is the star player on a Colony High School basketball team that sits at 19-2 and is one of the best teams in class 4a, the largest class in Alaska.

Menard and his teammates have found success this season through adversity. A magnitude 7.0 earthquake on Nov. 30 caused major structural damage to Colony High School’s gymnasium, shutting it down indefinitely and forcing school officials into a scramble to find facilities for the basketball team to use so they could proceed forward with their season.

Middle schools in the area became venues for practices. For awhile, every game was on the road.

“That was tough on us, we didn’t get to play a home game until 19 games in,” Menard said. “So we were traveling around, every weekend we were going to somewhere new. So that was tough for us, but I think that brought us together and we’ve had a successful year. This past Monday [Feb. 11], we are actually in our gym now, so it’s been a blessing.”

“It’s been a lot of fun actually, we’ve grown as a team together,” Menard’s Colony High School teammate Julian McPhail said. “I guess you could say it’s almost been good that the earthquake happened, it’s just made us a closer team because we are always with each other. On the other side of this we are almost with each other so much that we’re starting to get annoyed by each other but we always eventually come back to these are the guys you are playing with so you have to respect them. The team bonding has been exceptional because we’ve had all sorts of situations that we have been put in where we’ve been able to go through them all together. Since we all experienced that together, it’s definitely brought us a lot closer.”

At Wintrust Arena, his soon-to-be new home gym, structural damage from an earthquake shouldn’t be an issue. He’ll have other things to worry about anyway. As a preferred walk-on from a state not known for pumping out basketball talent in a DePaul recruiting class dripping in talent, Menard knows he has something to prove. But he’d have it no other way.

“This opportunity is great and the reward can be great but it’s not going to be easy,” Menard said. “For me, I want to be the best teammate that I can be. DePaul has some pretty great teammates at the end of the bench with Pantelis [Xidias]. It’ll be pretty easy for me to give off that energy the first couple of years. I’m definitely looking forward to just competing with these great athletes and improving and seeing where that can take me. I think that by the end of it I can be a [contributing] piece for DePaul.”

Before the season, DePaul senior guard Max Strus said one of his goals was to put DePaul basketball back on the map. Menard has the same goal with the added layer of putting his entire state on the high school basketball map as well.