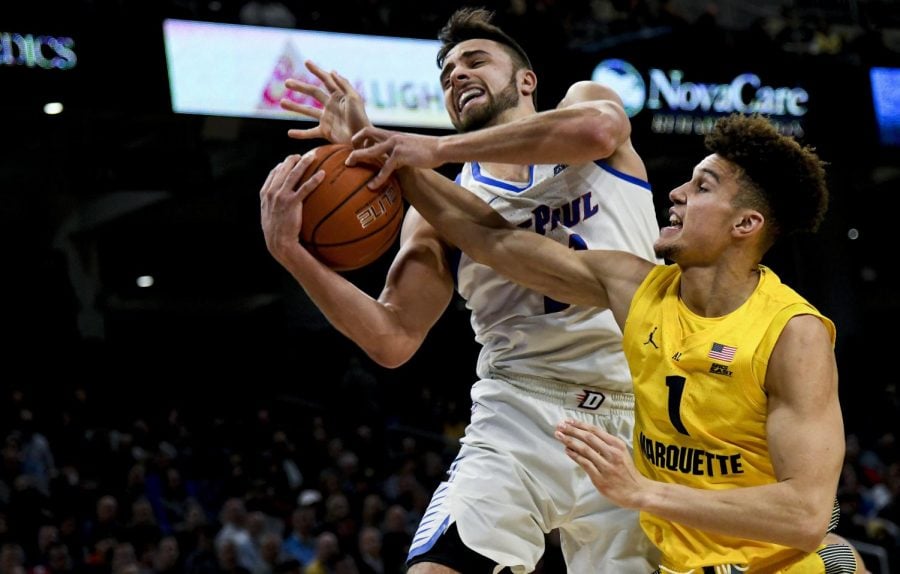 Coming off of two straight wins against Providence and Xavier, there was a buzz in the air not felt an awful lot in recent years as DePaul’s game hosted No. 10 Marquette Tuesday night at Wintrust Arena, with a chance to win three straight conference games for the first time since the 2014-2015 season.

Once the game started, however, Marquette quickly took control with four 3s from both Sam and Joey Hauser, as well as Sacar Anim and Markus Howard as the Golden Eagles jumped out to a 13-4 lead.

The 3-point barrage didn’t stop there, because the Golden Eagles finished 12-of-29 from the 3-point line and never trailed in the end coasting to a 92-73 victory. Coming off of a landmark win for Marquette, DePaul head coach Dave Leitao said his team ran into a “buzzsaw” Tuesday, while also not executing well enough offensively or defensively to come out with a win.

“The combination of their first two possessions defensively (…) sometimes you get one play behind. We were more than one play behind and they got two open 3s; they made them confidently,” Leitao said. “I don’t know that (…)[other than] maybe a spell here or spell there, we did anything to distort their rhythm or their confidence.”

After forcing Howard to turn it over eight times in their matchup, they saw the very best from Howard on Tuesday. The Big East’s leading scorer was in top form at Wintrust, topping 30 points for the fourth time in five games with 36 points, four rebounds and two assists. Coming in, DePaul senior guard Max Strus said the plan was to force other Golden Eagles to beat them.

“Take the ball out of his hands,” Strus said of the plan with Howard. “He’s a good player, he played good tonight.”

As DePaul looks to take the next step as a program, Marquette presented an opportunity that will come around again. To knock off a top 10 program for the first time since taking down Kansas in 2006, the Blue Demons can take valuable lessons from their loss to Marquette.

“What Marquette has done is learn how to play well consistently and learn out to close out games,” Leitao said. “In order to counteract that, you don’t have to play your A+ game, but you going to have to play well and (…). I would have to look at the film, but I don’t know possession-by-possession if did it enough critical areas. I don’t know that our focus was near where it needed to be to beat a team like this. I guarantee you our execution wasn’t where it needed to be, where it has been.”

The Blue Demons shot just 38 percent from the field, almost seven percentage points lower than its season average, and also turned it over 16 times, also well higher than they had in conference play.

On the other side of the spectrum, after forcing 19 turnovers in their first meeting, DePaul forced just six on Tuesday night.

“We took much better care of the ball, the first game we had 19 turnovers,” Marquette head coach Steve Wojchiechowski said of the difference between the two matchups. “They are really good when you allow them to get out in transition. When they’re in transition, Strus and Cain, their two senior leaders, are dynamic, and so coming into the game, we really wanted to take much better care of the ball, which we did.”

The good news for DePaul is it has plenty of games of significance heading down the stretch and the opportunity to secure more program-boosting wins over the next month. Entering Monday, DePaul was projected as a No. 6 seed in the NIT Tournament according to DRatings but dropped out following the loss to the Golden Eagles.

That still leaves plenty for DePaul to play for down the stretch, and is one of the reasons Leitao said his focus is solely a day-by-day approach rather than looking at where the Blue Demons are in the grand scheme of things.

“When you set a GPS and go on a drive, you don’t start marveling at the beach that you arrived at until you get there,” Leitao said. “We’re in the middle of a battle, day-by-day, 10 teams going back and forth. If you ask me, are we better than we were, ok yeah, but that doesn’t mean anything. It means that tomorrow is another day, and I don’t know exactly what is going to happen tomorrow.”

Leitao added that he’s taking a page out of Doug Bruno’s book and tries to go 1-0 every game and every day.

After the Feb. 16 game against Butler, the Blue Demons have just five games left before the Big East Tournament and sit in tie a for seventh with Xavier.