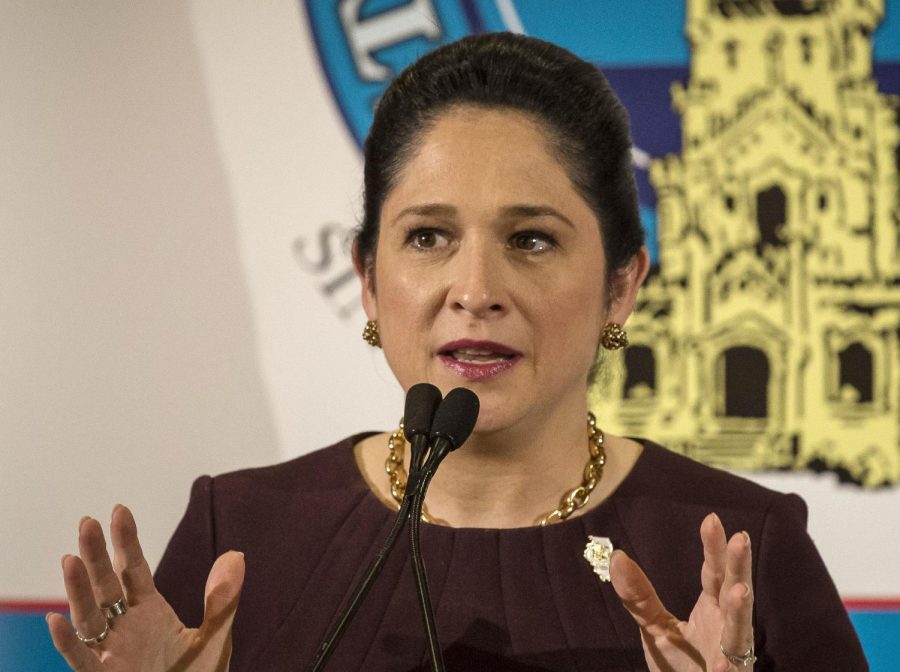 Illinois Comptroller Susana Mendoza speaks to the City Club of Chicago on March 20, 2017

Susana Mendoza’s political career is already historical, and becoming mayor would just add to her list of firsts as a Hispanic woman. With a total of 14 candidates who made it to the ballot, there has been quite the competition, with Mendoza as one of the leading candidates.

While simultaneously making history, her story is also conventional as she climbed the political ladder. Along this endeavor, she made alliances with old-school Democratic leaders.

“I think Susana goes where the power is,” said retired City Clerk Miguel del Valle in a Chicago Tribune interview.

It goes both ways, however, and political powers seek her for her diligence and hard work ethic. Mendoza began her political career in 1995 when she became press secretary for a state representative running for the 12th Ward at the time, after seeing many errors in a bilingual brochure critical of him.

In 2001, Mendoza joined the Illinois House of Representatives, representing District 1 for nearly a decade. During her time as a representative, Mendoza served on a handful of committees such as bio-technologies, international trade and commerce, public utilities and labor.

As a state representative, she also co-founded the Illinois Legislative Latino Caucus. DePaul’s Alliance for Latinx Empowerment (DALE) is hopeful as to what she could bring to the community as mayor.

“If Mendoza got elected, it would mean a lot in terms of substantive and descriptive representation in Chicago,” said Robbie Merkel, the vice president of DALE.

As a first generation Mexican-American, she would represent a population of the city that has not had a mayor reflective of them before.

“Mendoza supports improvements in public education which is a topic that mostly affects the Latinx and Black populations,” Merkel said. “An issue that is important to Latinx students at DePaul students is the affordability to live in the city or commute to a university that is taking up the majority of our expenses.”

In 2016 she made history again as she was the first Hispanic woman to be hired as a comptroller — a government position that oversees and handles finances. Over the governor’s veto, she fought for the Debt Transparency Act which enforced state agencies to no longer report annually, but monthly the amount of unpaid bills they have. This was a “a historic first unanimous veto override of a sitting governor in that chamber,” according to her website.

Like any political figure, their statements about themselves and their competition must be checked for truth. Politifact partnered with the Better Government Association, or the BGA, to create an Illinois Truth-O-Meter. With only four statements checked, it appears overall Mendoza is in the clear.

The truth-o-meter does correct her recent Jeopardy ad where she claims that Bill Daley, one of her opponents, “wrote the blueprint for Rauner’s record Springfield gridlock.” This was determined to be guilt by association.

On the other hand, candidate Toni Preckwinkle put out an ad that completely misrepresented Mendoza’s stance on the death penalty. Politifact rated Preckwinkle’s ad “pants on fire,” which is the worst rating someone can get. With selective editing, the ad made Mendoza look like she said she was in favor of keeping the death penalty in place rather than her explaining how she is not okay with an innocent person being executed.

Last month, an old video of Mendoza resurfaced where she is hugging Ed Burke, who was recently federally charged with attempted extortion. After the charges against Ed Burke were made public, Mendoza released the statement saying “it is time for him to fully focus on the charge against him and resign his chairmanship of the Committee on Finance.” Although being close to the alderman in the past, she has tried to make it clear in the public that that is no longer the case.

With the mayoral race drawing to a close, Mendoza’s supporters remain confident that she will transform the position and bring prosperity to the city.

“We are 100 percent confident Susana will be in the runoff,” Slater said. “We need a mayor who is concerned about the next generation and not just the next four years.”