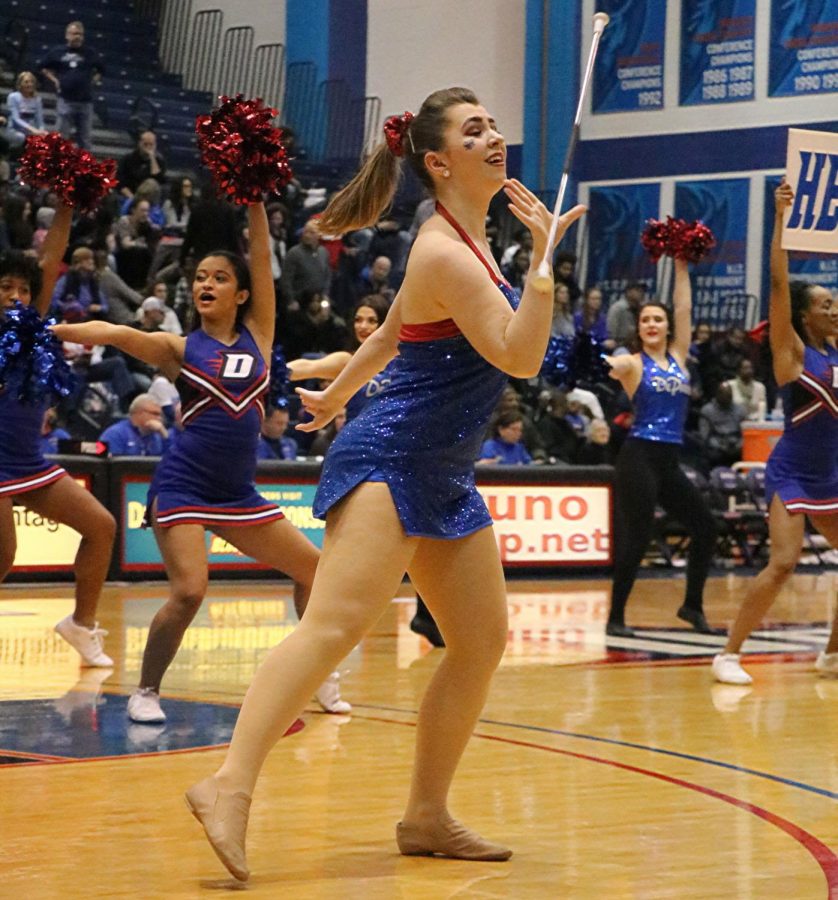 As a young girl growing up in Newport, New Hampshire, Danielle Cherry began her baton twirling career at the age of 10 after watching the Red Star Twirlers do their annual Christmas show. Even though she was younger than the other girls, she was determined to join the team.

“They do a Christmas performance in my town and I was like that’s really cool. Wow I wanna try that,” Cherry said.

“I just started the club, you could say,” Cherry said. “It’s new this year because of me. I came in and said, ‘this is what I do.’ Can I come and do it?’ And they said yeah,”

Cherry began twirling in her hometown with her nationally-recognized team, the Red Star Twirlers. Her fast-developed skills caused her coach to lower the age limit on the team so that Cherry can join. Twirling has brought Cherry out of her shell. Her coach, Gina Hutchinson, has watched her grow since the age of 5. Hutchinson says it has been a complete joy watching her grow up over the years.

“She was a little girl when she started, and she has made her mark at her high school where they had never had a twirler,” Hutchinson said.

Cherry has brought twirling into her life wherever she goes. In high school, she was a championship-winning twirler in Twirl Mania at Disney World in Orlando, Florida. She represented DePaul at a college-level championship at Disney World earlier this month. She was a part of the college division level at the ESPN Wide World of Sports, also at Disney World.

“It went well for my first collegiate competition with the top twirlers. I placed 6th in three baton and top 12 overall for my college performance,” Cherry said.

The Red Star Twirlers has been so successful that it has even left the country to compete in championships, giving Cherry the opportunity to travel to Paris.

“Because we did so well a few years back they actually invited us to be the first twirl team to go to Disney Paris and perform there,” Cherry said.

Cherry has become nationally-recognized for her twirling. She has five national titles, numerous New Hampshire state and New England regional titles. Her team has five international titles and Cherry won the High School Classic Championship of 2018, which gave her the title as Best High School Twirler in the country. Her best friend and fellow Red Star Twirler, Madelyn Moedebeck, has been by her side during every win.

“Danielle is a vital part of our team for countless reasons,” Moedebeck said. “Her God-given leadership abilities have led the team to numerous big wins and led us through some of our more difficult times.”

Back home, Cherry works as a server at the Salt Hill Irish Pub, the only one in her small town of Newport. She has to bring in $10,000 each year to help pay her tuition. On top of serving, Cherry volunteers every year by helping put on her town’s annual Christmas show, where all proceeds go to the Willey-Perra organization, which works to make sure every child in Newport gets presents for Christmas. Cherry has put in over 100 hours of community service to this organization.

“Also, what makes the program special is that the families get five gifts per child and they only need to sign them up, no proof of economic issues required, ” Cherry said.

Cherry is bright and has a sparkle in her eye when you talk to her. She is passionate about twirling, school, charity work and being involved in her hometown. Twirling specifically has given her new doors leading to opportunity. Cherry competed in her hometown’s annual Winter Carnival Pageant. She twirled during the talent part of the competition and won the contest, becoming the 101st Winter Carnival Queen.

“I actually was a princess when I was little, so when I saw the pageant I was like ‘I’m going to do that – I’m going to be that girl’,” Cherry said.

Her coach runs the annual pageant and was able to see her twirling performance at the carnival.

“I got to see her become our town’s 101st Winter Carnival Queen in large part because she brought the house down with her twirling,” Hutchinson said. “My mom was the carnival queen in 1946, so it was really wonderful to see Danielle join the sorority of queens,” Hutchinson said.

Cherry has worked hard to be where she is today. She has used all of the experience she’s gained to help further her dreams. Before Cherry, DePaul had not had a twirler on campus, much like at her high school. She is now able to perform with the dance team at all of the school’s basketball games during halftime shows and 30-second timeouts.

“The dance and cheer teams are excited about the variety and talent the baton twirlers bring to the in-game experience,” said Shanon Lersch, DePaul’s cheer and dance coach. “Together they entertain the crowd, bring up the excitement level of the game, and encourage fans to cheer on their teams.”

Cherry was recognized, along with the rest of the female athletes at DePaul, during National Girls and Women in Sports Day.

“She is selfless, charismatic, kind-hearted and has so, so much love to give,” Moedebeck said. “She knows what she wants for herself, and nothing is going to get in her way of reaching those goals.”

Cherry plans on expanding the DePaul twirlers and focusing on her degree in film. After college, she has every intention to continue twirling and coaching children in the sport she has excelled in.

“She is humble, motivated,” Hutchinson said. “She goes for opportunities as opposed to letting them pass her by.”

Hutchinson said she fully believes that all these great qualities about Cherry will make her bigger than ever, even landing her a spot at the Oscars someday.

Twirling at DePaul could become as big as cheer and dance one day,adding another wow factor to halftime shows and giving students another program to join.

“We encourage it to grow and increase numbers of participation,” Lersch said. “Just as the dance and cheer programs have grown and developed, I see the twirling program doing the same. More features, community performances and competitions are all in the works for this program.”