Legal sports betting on the horizon, but money may not follow 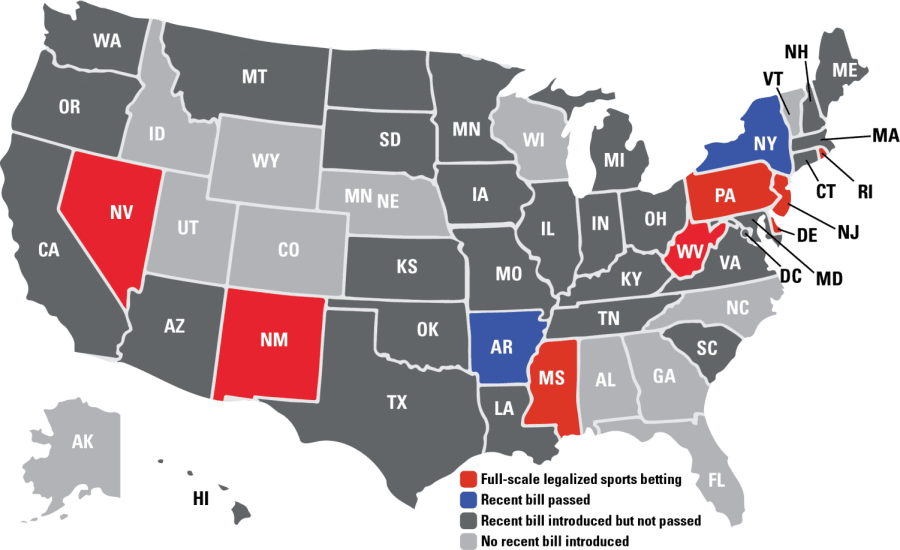 The DePaul Blue Demons took on the Creighton Bluejays on Feb. 20 in a basketball game that didn’t go DePaul’s way. However, in sporting events across the country, there is a game within the game. Billions of dollars a year are bet on sporting events around the world. In the past, the way to place these bets would be a shady bookie or a questionable website. However, these could be a thing of the past for the state of Illinois.

The Supreme Court struck down the Professional and Amateur Sports Protection Act of 1992 in May. This act outlawed sports betting nationwide. However, once the act was struck down, eight states now have laws that allow full-scale sports betting. Two more bills have recently passed in Arkansas and New York to legalize sports betting in those states in the near future.

Illinois could soon be the next state in line to pass legislation. During Gov. J.B. Pritzker’s budget address, he called on the legislatures to pass his budget, which includes the legalization of sports betting.

“I am calling on the legislature to take this up immediately so that Illinois can realize hundreds of millions of dollars, create new jobs, and bring sports betting into a regulated environment that will protect citizens from bad actors,” Pritzker said. “If we do it this year and become the first state in the Midwest to move on this initiative, we can realize more than $200 million from sports betting fees and taxes in FY 2020.”

New Jersey is one of the states that Pritzker is surely keeping an eye on. New Jersey legalized sports betting on June 11, 2018. Just a few days, later they opened their first sportsbooks on June 14, 2018. Since then, over $1.6 billion have gone through the sportsbooks in New Jersey. The sportsbooks have made over $100 million in revenue from these wagers. With the tax of 8.5 percent, New Jersey has walked away with over $13 million in taxes.

DePaul professor Michael Lynch explained that the money coming to the state is really not a whole lot.

There needs to be a huge amount of bets for the state to realize the $200 million goals that Pritzker laid out in his plan.

To get to $200 million, people need to become interested in sports betting. Brandon Alpert is the CEO and founder of Booga, which is a hedge fund that doesn’t bet on stocks but instead on sports. Alpert explained that there is a new interest in sports gambling because it has gone mainstream.

“Sports gambling is being talked about on major sports news sources all the time now,” Alpert said. “The popularity of this form of entertainment is getting more people to want to bet on games.”

Interest can grow even more if Illinois were to legalize sports betting. Lynch broke down the interest of gambling into the three As.

“The three As of gambling are acceptability, accessibility and availability,” Lynch said. “[If legalized] People would be more comfortable and they would have the idea to give betting a chance.”

When more people bet, more tax money will go to the state of Illinois. However, the states that have passed laws so far have certain restrictions. Only four states currently allow for sports betting online. Also, many states have restricted bettors from placing wagers on teams that come from the state. In New Jersey, you cannot place a bet on any team, pro or college, that comes from the state, even if the game is being played somewhere else.

The future for sports gambling in Illinois is still up in the air. However, fans can look towards the future for what may come soon. During the Feb. 20 basketball game, graduate student Phil Prombo explained his thoughts on if he would bet on the game if it was legal.

“I don’t think I would gamble but I know a lot of people who would,” he said. Prombo went on to say that if the availability to bet on sporting events is easier, it would be a lot more “enticing” to bet.

One Response to “Legal sports betting on the horizon, but money may not follow”