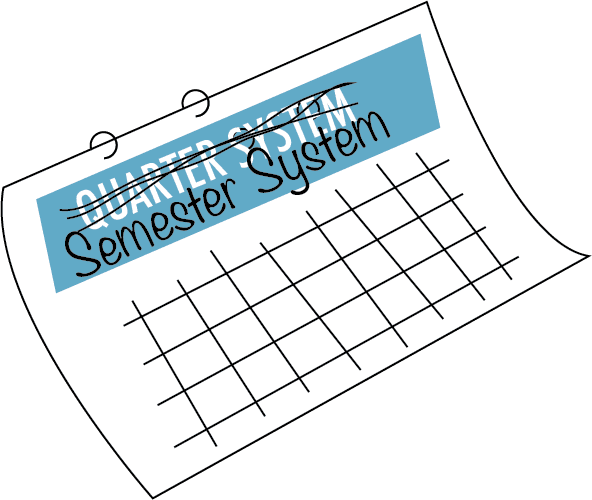 Graphic by Annalisa Barnowski for the DePaulia

The Faculty Council is mulling over the pros and cons of switching to a semester-based academic calendar and adjustments to spring break scheduling.

Faculty council addressed a possible four-day spring break as well as the much-debated quarter-to-semester change at its March 6 meeting.

The proposal included two different versions. Version A creates the possibility for winter courses to start Jan. 2 with a full week of Spring Break. Version B would have winter courses starting Jan. 3 with a 4-day Spring Break from Tuesday to Friday. Both would occur during the 2022-2023 academic year.

According to Miller, the Associate Deans Council proposed and supported Version B.

According to the document from the discussion, those in favor of Version A argued that the schedule would accommodate students who study abroad over Spring Break. The document also said a full week is a necessary split between the end of Winter Quarter and the preparation for Spring Quarter. Students would also be able to know their grades from the Winter Quarter before the spring.

The document said those in favor of Version B support the late start; it would accommodate new transfer students who need to adjust their schedules as well as students who need an extra day after the holiday to return to the university, particularly international students.

Quarter-to-semester taskforce members Mary Ann Papanek-Miller and Caryn Chaden provided updates as to what the taskforce has done so far.

Papanek-Miller, chair of the Art, Media, and Design department, said the task force’s impetus is a part of the Strategic Plan which addresses studying the change. Papanek-Miller referred to the shift in calendar as “energetic.”

According to Papanek-Miller, the taskforce charges will be to examine the higher education landscape and relevant data; identify specific factors to consider in a transition; analyze the impact of a transition on pedagogy, learning outcomes, alignment with other universities and other pertinent factors; and produce a report describing academic pros and cons of a possible transition for further consideration.

Papanek-Miller said the taskforce plans to complete its work by June 7 of this year. She encouraged faculty to complete the climate survey.

The taskforce has interviewed staff from Ohio colleges and universities who recently transitioned from quarters to semesters in 2015, Papanek-Miller said, as well as Provost Marten denBoer, who participated in planning the process for California Polytechnic State University at Pomona.

Peg Birmingham, a philosophy professor, said she was disappointed that the committee’s charge did not include observing the impact that the switch will have on research time and productivity.

Chaden, an associate professor of English, said the survey would include questions pertaining to the impact, specifically about scholarship.

Sean Kirkland was on the subcommittee in the philosophy department that put together the self-study about how the change would affect the graduate program. Kirkland suggested that the greater number of courses the students take should be more diverse in study, because it is a principle virtue of DePaul.

Kirkland, a philosophy professor, said diversity of study is a virtue the university is not capitalizing on.

“I think one of the best things that can come out of this is that whichever way this goes, we can articulate why it’s gone that way,” Chaden said. She said Kirkland’s point should be focused on.

Kirkland also said there might be advantages to the quarter system that might not be in place yet.

The taskforce includes students Johnny Milas, an undergraduate, and Kaitlyn Pike, a graduate student. But students are diverse around the university, as Andrea Kayne pointed out.

Kayne, an associate professor and director of the Educational Leadership Doctoral Program, said she has students getting their doctorate or master’s degree at night. Kayne said it would be longer for those students to get through the program if there were to be a switch to semesters.

In addition to faculty survey, the taskforce plans to survey students in April.

Chaden said a partial switch might not work well.

The survey will be confidential but not anonymous, Chaden said. The taskforce needs to identify factors of the participants and groups to evaluate the decision of switching.

Chaden said the taskforce is trying to be as transparent as it can be.

“We are studying, we are exploring, we are seeing what the possibilities are,” Chaden said.