Third time, no charm: Men fall to St. John’s in first round of Big East Tournament 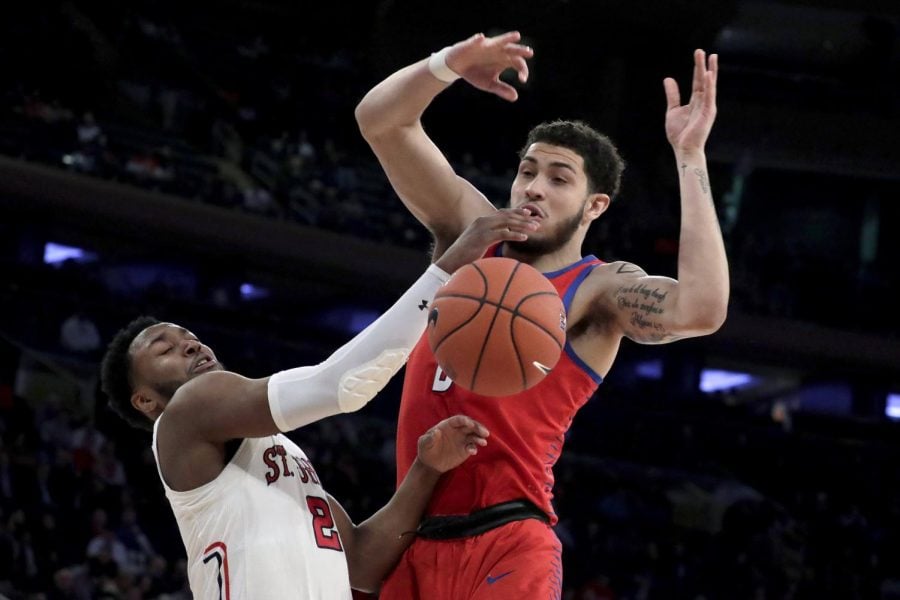 Sophomore forward Jaylen Butz loses the ball going up for a shot against St. John's guard Shamorie Ponds during the second half of the Big East men's tournament in New York. St. John's won the game 82-74. Julio Cortez | AP

NEW YORK – It’s been said that it is hard to beat a team three times in a season. DePaul experienced that Wednesday night in the first round of the Big East Tournament as the Red Storm pulled away in the second half for an 82-74 victory at Madison Square Garden on Wednesday night.

The Blue Demons remain stuck at two Big East Tournament wins since joining the conference in 2005.

After DePaul recovered from a rocky start to pull within four points at the half, St. John’s opened the second half much like they did the first half on a 12-7 run spanning the first six minutes to take a 53-42 lead. The Blue Demons started the half just 3-of-10 from the field to go along with three turnovers.

At times DePaul was able to cut into the deficit but could get no closer than eight points as the Red Storm always seemed to have an answer as they eventually built up a 17-point lead late in the second half. After scoring 48 and 59 points respectively in the second halves of the first two games, DePaul scored just 39 points in the second half of this one largely due to their inability to get stops combined with a lack of ball movement.

“We weren’t getting the kind of stops that allow us to get out and get some easy opportunities,” DePaul head coach Dave Leitao said. “Against any team, it’s a higher percentage of an opportunity to score against a defense before it’s set. We were taking the ball out, out of the net, or stoppage of play more than we needed to because they were scoring. And then like I said, I don’t know that we had the combination of really good ball movement and crisp offense like we needed to.”

For the second straight game DePaul got off to a slow start as St. John’s jumped out to a 13-4 lead just over four minutes into the game. Senior guard Eli Cain responded with eight straight points as the Blue Demons cut the lead back to 16-12.

While others struggled to get going, Cain was key for the Blue Demons in the first half with 16 points on five-of-11 shooting from the field. The senior could only muster seven points in the second half, however, before fouling out with 1:32 remaining. He finished the game with 23 points and five rebounds.

“I think their game plan was pretty much the same,” Cain said on if he saw anything different from the Red Storm in the second half. “They were setting off certain guys, trying to deny Max the ball, trying to deny me the ball. I think in the first half I just got into the lane on rip-throughs and things like that, and I made a lot of free throws.”

It was also a frustrating night for senior guard Max Strus, who after scoring a career-high 43 points the last time to the two programs met, was held to just 14 points on 4-of-12 shooting. The senior guard was defended much of the night by Big East Defensive Player of the Year Justin Simon.

While much of the attention shifted to Strus and Cain, sophomore point guard Devin Gage took advantage finishing with a career-high 19 points.

For DePaul, this marked the fifth straight year DePaul had been knocked out in the first round of the Big East Tournament and dropped to 15-15 on the season. If this is the end for the Blue Demons, it will be the first time since the 2006-07 season they did not finish below .500. But after the game, both Cain and Strus weren’t ready to look back their legacies, instead expressing hope they still have more basketball left to play.

“Well, first off, I don’t know if we’re done playing. So I don’t think our, quote, unquote, legacy is over. But if we were done today, I think we did — this season personally, I think we shifted the coaching to a more positive direction. Coaches did a really good job of bringing some guys in for the future. So the program is in really good hands going forward.”

Strus was asked whether he had anything to add and briefly echoed Cain’s sentiments.